Sonia Boue considers the role of criticism and ‘mainstream’ approval in the career development of neurodivergent artists, following her attendance at the Contested Spaces closing event at the Foundry, London on 9 January. The event consisted of a panel chaired by curator Aidan Moesby featuring Middlesborough Institute of Modern Art (MIMA) curator Elinor Morgan, curator and founder of Jennifer Lauren Gallery, Jennifer Gilbert and independent artist Ashok Mistry. It was followed by a performance by artist Malgorzata Dawidek. 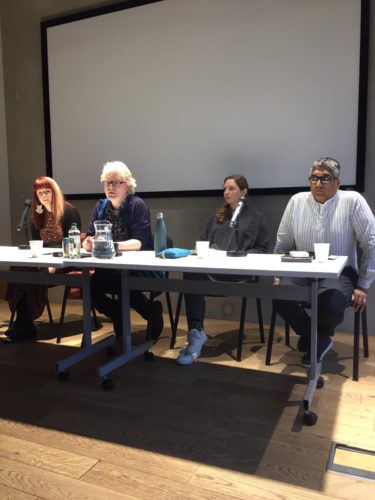 So last week I went to the fantastic closing event (conference) organised by Disability Arts Online as part of the Contested Spaces exhibition, at the Foundry in London, curated by Aidan Moesby.

Access arrangements were superb and the event was pithy. Succinct, and brimming with content, it was concluded with a quite beautifully poetic performance by Malgorzata Dawidek. Aidan deftly chaired the panel, which featured Jennifer Gilbert, Ashok Mistry, and Elinor Morgan. I came away enriched and energised.

I was especially struck by the lack of critical review for disability arts as a topic – though I’m a relative newcomer to the field. This is a good moment to say that I’m autistic, and that I can’t claim to speak for anyone but myself, and that I will focus on critical review in my blog post.

Jennifer Gilbert highlighted some shocking examples of ableism in mainstream reviewing of disabled artists, Elinor Morgan suggested strategies for disabled artists to gain access to feedback and build confidence, which might in turn lead to critical review. Raising the quality of our work was also touched on in this context. I will come back to this.

I was pleased Ashok Mistry spoke about having something to lose in engaging with the art establishment for approval – our very difference is precious. It is. Our very difference is our sometimes very ‘marketable’ USP (unique selling point), among other arguably more important things. I can’t think of anything worse than contorting the self to fit in. Surely we need to infect the ‘mainstream’ with our glorious USPs rather than try to second guess it.

I left the building with Artistic Director of DASH, Mike Layward, who kindly saw me to Marylebone Station. I’m indebted to our conversation for helping me articulate what I think I feel about the critiquing of art made by disabled artists, certainly, I feel it about the area I know best, autistic creatives. We are all of us outsiders by default unless masquerading as…well…just artists.

Someone (I think it was Mike) had earlier pointed out that Frida Kahlo has been assimilated by the mainstream through the erasure of her disability despite it often being her subject.

Another good point which I hadn’t considered was raised by the panel that critics can be frightened of reviewing us because they might ‘get it wrong’, thereby causing offence and also losing credibility. Time for some tough love. Do the work. Research the field, don’t avoid it. Yes, it can be quite hard to get it right, but a lack of familiarity with disability issues as an excuse in 2020 looks as weak as a used teabag. Get on with it, because here is where the good stuff often is!

I’m autistic, so as usual I experienced a lot of upside-down thinking about this topic. I so appreciated Ashok’s comment that he’s a professional outsider! Okay, critical review is important. Informed critical review can be vital to a career, but the uninformed critic who’s anxious about getting it wrong isn’t what we need. I say this as someone who supports neurodivergent (ND) artists professionally. Often the job is to unpick the barrage of unhelpful mainstream ‘critique’ they’ve experienced over a lifetime.

These nascent artists need nurture, and perhaps most importantly autistic artists may not find conventional critique/ review helpful as a form – though of course, they may benefit from the exposure. It isn’t just that we need to build ourselves up. There can be a genuine cultural difference, I’ve found, whereby our need for input is simply that – different. So I think we need a range of methods for evaluating and elevating artists. ND artists may not need conventional critique so much (because it may misread or prove irrelevant to them) to improve the quality of their work, but may perhaps benefit more from access to the kinds of resources which enable better production values. Quality issues (if they exist) may be about being cash poor and unable to invest in materials or production processes. That’s not to say that encouragement and tailored mentoring aren’t vital. They can be. It’s just that the current model for artists’ elevation via critique and review is like the hotel elevator that ain’t working. We often don’t get off the ground floor and I wonder if this resonates more generally for disabled artists? What would really help you, is my question?

Little about the way many ND artists work best is reflected in neuro-normative professional practice. There can be a great deal of unlearning to do in unshackling ourselves from these tyrannies. Perhaps more needed than conventional critique is help in understanding neuro-normative codes. It’s very simple, you can’t be expected to navigate what you can’t see or even begin to process. The current system is completely weighted against us.

So my heart sinks a little at the idea of chasing conventional critiques – though ironically if my most recent DYCP ACE funding bid is successful (very slim chance), I will be doing exactly that thing, but doing so autistically and on my own terms! Surely the best critiques consist of dialogue and if reviewers are frightened then that’s a sign that such a dialogue is lacking.

So, what’s needed first is a culture shift, and projects or initiatives which dare to throw stakes in new ground. Critics need to understand what they’re viewing if they’re to be any good to us. Review isn’t just about exposure, it’s also about framing. Ah yes, and it’s about bums on seats, which is an area I haven’t yet touched on and probably won’t for lack of time.

Ashok unlocked something vital when he talked about the need for us to be allowed to be our ‘messy’ selves (forgive me if I haven’t paraphrased you correctly, Ashok!) For me this is the key to making a necessary 360-degree turn.

Critics need to know what they’re looking at to get it ‘right’ and be helpful. It goes without saying that we need disabled critics and curators, but we need ally curators too. I hope that if some of the Shaping the next ten years (Arts Council England) policies go the right way we may see a real development of ‘hybrid’ ally professionals along with more of us (of course!) I’m very keen on collaboration as a way forward.

In the field of invisible disability (which has a shorter history) I feel we are in a useful moment of transition where disruption can occur (and I hope this resonates more widely with my more experienced disabled colleagues). I don’t think that what we need is judgment on abled/neuro-normative terms, but rather that our products must be allowed to flourish as they need to and be equally valued. What I feel we need is opportunity on our own terms to create what we believe to be good, which may be very different from the current mainstream critical agenda.

We also probably won’t be equal until the boot is on the other foot and the ‘mainstream’ values and seeks out what disabled curators and critics think about its cultural outpourings. Dialogue is all.

I began my 2018 catalogue essay for the Shadowlight Artist’s Arts Council England funded RISING exhibition with the following provocation.

“What if everything you ever thought about learning disability is wrong.”

A power imbalance exists because the ‘mainstream’ gaze monopolises and is uninformed. It creates insiders and outsiders and is extremely outmoded, as Drag Syndrome are currently proving on the global stage in taking it by storm.

I think the conversation has probably moved on already and it’s now for the ‘mainstream’, so-called, to catch-up if it can.

Great article. I wish there were more networks for Neurodivergent Artists to support and encourage each other. I think the link between quality and cashflow is spot on. It’s often a catch 22 situation. I only just discovered access support for ACE applications!