Calum Perrin is the latest artist in our series exploring the day-to-day working practices of disabled artists. Calum is an autistic sound artist and sound designer. As such, we’ve commissioned him to do his piece as an audio track. There is also a transcript available. 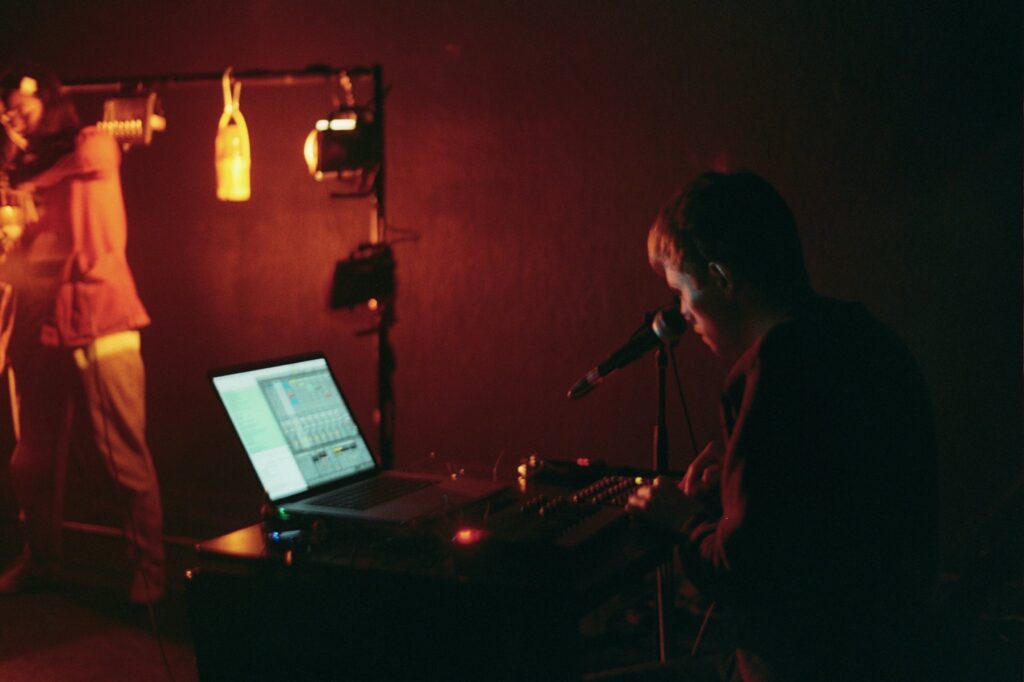 I am an autistic sound artist and sound designer, working across theatre, performance and radio. My work has been performed and played at the Prague Quadrennial, HearSay International Audio Arts Festival, BBC Radio 4, Almeida Theatre, The Yard and Camden People’s Theatre. This audio piece is about a day in my life during lockdown; I talk about my creative practice, the unique challenges facing autistic people during this time, as well as playing some audio clips of my current projects. I recommend listening to it in headphones.

A transcript is available to download here, and read below. 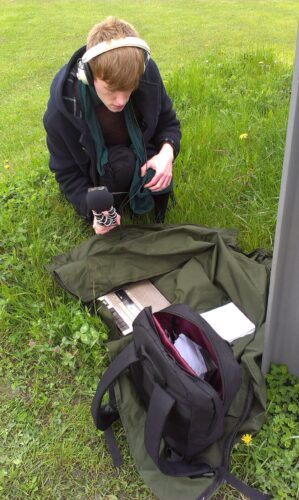 My name’s Calum, I’m an artist and I work primarily in sound, usually making sound for theatre and performance, sometimes for radio and podcasts, and occasionally just as sound art or music.

Like a lot of autistic people, I function best when I have a routine to stick to. Without a routine, I become a bit unmoored and gradually float away.

So lockdown has definitely been a challenge, as my previous schedule went out the window. I’ve worked really hard to give myself a routine, so I can keep on working, hit deadlines, make sure my mental health is in a good place, and also allow myself time to relax and enjoy myself.

If one part of my routine goes wrong then the whole thing falls apart. That means I’m a bit useless for a couple of days, but then I build a new routine and gradually start to feel a bit more motivated.

But regardless of how I’m feeling, my day always starts with a cup of coffee and a bowl of porridge. For the last few months I’ve been learning German, so I’ll do a bit of practice while I eat breakfast.

I do need to work on my pronunciation.

By the kitchen table I have a piece of paper listing all my current projects, and their deadlines. After breakfast, this is where I’ll look to decide what to work on that day.

It’s been very difficult for artists who have had work cancelled due to the lockdown. For practitioners like me, who often work in theatre, it’s very worrying indeed. Theatre auditoriums packed with people don’t really mix with social distancing measures, and it’s all but certain that theatres won’t open again until 2021. But the fear is that many smaller theatres just won’t reopen, especially those spaces that program more experimental work.

I’m lucky that I can work from home. My first piece of work for today is to do some composition for a binaural sound theatre piece I’m working on. Binaural sound replicates human hearing, so when you listen back in headphones, it really feels like the sounds are with you in the room. During the performance, the audience will wear headphones and hear my compositions, whilst on stage, a group of performers respond physically to the sounds.

Each scene is based around the experiences of a different member of the group. The scene I’m working on today is about the feeling being interrogated by family members, sitting around the table while you’re eating tea. I actually had a meal with the whole theatre company- everyone cooked a dish and we all ate together, while I recorded the sound of the meal to use for this scene. Lots of chewing, crunching, and gradually escalating intrusive and personal questions.

I’m really enjoying working on this project, but it is stressing me out a bit. It’s hard to work on a theatre project in complete isolation- I’m used to being in rehearsal rooms, watching run throughs, having meetings with directors, so it’s difficult to get a sense of where a project is headed when I’m working without any of that.

A break for lunch and a quick walk outside. I’m going to go mad if I’m stuck in the house any longer.

In the afternoons I’ve been trying to do something creative, which isn’t based on any sort of outcome- just writing, or making songs. This week I’ve been doing sound improvisations. Improvisation is a big part of my practice, and I often perform with a movement practitioner and a visual artist, where we do structured improvisations. My improvisation practice is mainly based around making field recordings and then manipulating them in real time, and using cassette players and other playback media. But it’s quite open and I tend to use whatever I have at hand. I recently bought a simple sequencer, which basically plays notes automatically, following a sequence that I input. You can then use this with computer software, and make all sorts of different sounds.

The software I use for most of my artistic work is called Ableton Live. It was originally developed for DJs and electronic musicians, and it sort of bridges that divide between composition and performance. So you upload lots of different sounds into the software, and then play and manipulate them in real time, which is great for my style of improvisation. So for this improvisation I have my sequencer running through a synthesizer, some samples of field recordings from my archive, a cassette player and selection of cassettes, and a microphone, that I can use to sing, speak or occasionally play a bit of trumpet.

After a morning working on specific projects, with deadlines and particular requirements, it’s so refreshing to just improvise for a while. Some really interesting things crop up, that I may end up using for other projects, but mainly it’s just the joy of being creative for the sake of it.

Later in the afternoon, I have a Zoom call with my friend and collaborator Aisling. They’re autistic too, and we’re working together on creating an autistic-led theatre company.

Basically, the reason I wanted to do this is because I realised, in the last two years I’ve been trying to do more theatre stuff; it’s very hard to find opportunities, it’s very hard to understand the way that the industry works- this affects all people, not just autistic people- the unsaid things, the realtionships, the networks, the back room decisions…

You’re starting from five steps behind if, before even getting an opportunity, you’re have to say “Oh by the way, I need to do this stuff and I need to do this stuff in order to work”- why does someone take a chance on you? Often they don’t, in my opinion. So I decided if I want to make work I have some creative control over, I have to make it myself.

There have been quite a few artist call-outs and commissions lately, that I’ve been applying for both with Aisling and by myself. I’m dyslexic, so it can be incredibly difficult to write applications and personal statements, so often friends will help me- I’ll speak and they’ll take notes, and then I’ll edit the notes and create an application from that.

It’s 6pm now, and work stops for the day. It’s very important for me, to not let work take over my life. I think with creative work, it’s easy to work yourself too hard, to think of it as ‘not really work’. But if you’re earning part of your living from it, then it’s a job like any other, even if you love what you do, and you have to respect yourself and your wellbeing. So I try to create a clear division between work and relaxation- it stops me from feeling burned out and overwhelmed.

I still need to be focused in the evenings, and have a bit of a routine. Cooking something nice for tea is a good start- I’m making a Thai green curry tonight. I’m also trying to watch some good films- even though I work in sound, I’m hugely influenced by cinema, and before lockdown I’d go to the cinema at least once a week. This evening I’m watching Close Up, an Iranian film by Abbas Kiarostami. It’s based on a true story, about a man who impersonated a famous Iranian film director, and convinced a family that he was going to make a film about them. Kiarostami gets all the people involved in the case- the identity fraudster, the innocent family and ever the director he was impersonating- to play themselves in the film, acting out scenes from the case. This is the first time I’ve seen it and it’s quite amazing, blurring the line between documentary and fiction filmmaking.

A good way to finish a busy day.

Even though I find lockdown difficult in many ways, as an autistic person it also comes as somewhat of a sensory relief. It’s so much quieter outside- fewer cars and buses on the road and people on the streets, and not being able to travel by public transport is a blessing. I haven’t taken the tube in almost three months, which is amazing, as it’s usually such a loud, uncomfortable and overwhelming experience. Not having to go to crowded pubs, shops, cafes, venues, it makes me feel much happier, even though I miss those places in other ways.

And I suppose I feel a lot of guilt about that. This is a very difficult time for a lot of people, and is difficult for me in many ways too- I’m not sure what work, if any, I’ll have after these current commissions are complete, and I’m still relying on Universal Credit, which has been a fixture of my life for over a year now. But the quiet really is something that I’m relishing. I recently had a conversation with an Irish sound designer called Mel Mercier. He said that the night before the lockdown restrictions were eased in Ireland, him and some friends across the country went outside and made some recordings of the soundscape. Mel said he wanted to capture that moment, because after that night it might never be as quiet in Ireland again.

So as much as I want this all to be over, there’s still something quite sad about that.