What does it mean to you to have a little space? Gecko and Mind the Gap, have teamed up to devise a little space – exploring negative and positive reflections on aloneness, agency and isolation. Review by Gemma Nash

In a stark room caged by copper pipes, we are asked to contemplate what it means to have a little space?

Showcased, rather ironically, at HOME theatre in Manchester, ‘a little space’ explores interweaving themes of isolation, community and personal space. Using movement, glitchy sound and a steam punk set, we observe the lives of five people living in a tower block.

With very little spoken word, the piece is very much about individual interpretation. In one scene, for example, a young woman relives her time in hospital through distorted and confusing flashbacks. A hospital bed appears on stage, and other cast members whirl furniture round the stage as though they are representing her inner thoughts. I wondered whether this could have been a reference to learning disabled people being trapped in ATUs (Assessment and Treatment Units). Equally it could have been an exploration into the idea of craving your own space, but then finding yourself overwhelmed by a sense of isolation.

In another scene, a man seems to be more interested in watching TV than being with his partner. Other cast members pull and push him towards and away from the TV – as though they are illustrating a serious struggle with screen addiction. Again. I wondered if this was a comment about screens and how they are perceived as bad for society and for community? 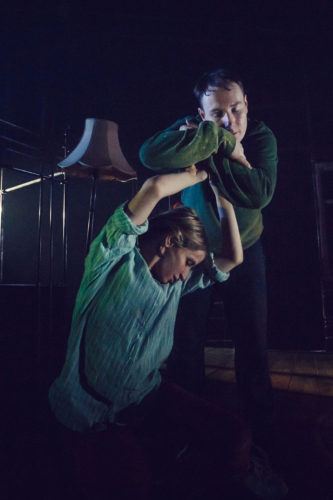 The choreography and set design were impressive. The cast worked together seamlessly, using movement and breath to portray thoughts and emotions. The use of breath, and quirky gestures, reminded me of the captivating movement sequences in the Netflix show OA. This technique created a real sense of otherworldliness and strangely disjointed synergy.

Stripped back lighting and metallic frames helped create a feeling of darkness and isolation – at points there were only a few light bulbs on stage, building atmosphere and intrigue. My one criticism was the occasional use of light boxes to illustrate and illuminate the entire tower block. These boxes were visually overwhelming and created an unnecessary sensory overload. (I personally felt that there needed to be some sort of warning for the audience.)

The different sonic worlds for each character worked brilliantly and I loved how the actors used the whole set as a musical instrument. For example, the Caretaker character was accompanied by the sounds of metallic percussion instruments, and the character with a TV addiction was associated with the sound of static.

There were so many ways this show could be interpreted, and so many hidden layers, it is definitely something I’d recommend watching more than once.

a little space goes on an extensive tour of the UK and Ireland. Please visit the Mind the Gap website for further details.