Sandra Alland highlights some of the events, speakers and performers from this year’s Arika in Glasgow, including We Will Rise, Mujeres Creando, Sondra Perry and Miss Major. Episode 8: Refuse Powers’ Grasp took place at Tramway 21-23 October 2016. The first thing you notice about Arika is radical care. Okay, if I’m totally honest, it’s style. (Check out their brochure: the print is small and pale, but it’s gorgeous.)

I was so struck by the care Arika offered at Glasgow’s Tramway that it almost seemed I hadn’t been there before. Though not a disability-led or -focused festival per se, Arika in some ways provided better access than the Unlimited disability festival that took place in the same location. Over the weekend several participants emphasised, ‘Disability justice is trans justice’. Arika didn’t just cover the basics of choosing a wheelchair-accessible space and offering BSL and captions at most events (and by request at others). They also provided quiet space. Latecomers were admitted, and we could leave when we wanted. Wheelchair-users were not segregated from non-wheelchair-using friends in a seatless front row, and people with other mobility issues weren’t expected to climb stairs to the second row. Reserved seating also meant we didn’t have to queue or sit on the floor in the lobby, as happened during long waits at Unlimited.

There was financial care, too. Arika asks for donations, but not at the door; payment was optional at a separate table, so no one was turned away or shamed. Perhaps Arika’s only failure of care was bathrooms, a failure partially tied to the Tramway, which has only two single-use accessible toilets on the ground floor and otherwise gendered bathrooms. But I was surprised – considering the focus of the weekend – that Arika didn’t alter signage to avoid queues at disabled toilets, and to ensure non-binary, trans and/or gender variant people felt safer.

Opening night featured a brilliant discussion, ‘Life in Flight from Every Prison’, between American guests Reina Gossett, Dean Spade and Joshua Allen, and local activist Etzali Hernandez of We Will Rise – a group of migrants, refugees and asylum seekers who take direct action to seek abolition of immigration detention centres and prisons.

The panel spoke eloquently of queer and trans resiliency, the destructiveness of capitalist charities, the ways in which trans people of colour might relate more to class issues than mainstream gay issues, the struggle to close Dungavel in Scotland, and how to cherish community and celebrate even when we’re going to lose. After the discussion was a screening of Criminal Queers, Eric A. Stanley and Chris Vargas’ theory-ful yet funny film about a radical trans/queer prison break (complete with cameos from Mattilda Bernstein Sycamore and Angela Davis!), then a club night. A packed agenda meant a lot of complexity to unpack over the night and weekend, more worthy of several essays than a short review.

Highlights included: electric Bolivian anarcha-feminist Maria Galindo of political art group, Mujeres Creando, discussing resistance to ‘the logic of inclusion’; Reina Gossett’s stunning short animation, The Personal Things, featuring Miss Major underlining how ‘the personal stuff is what gives you the strength to go forward’; and New Jersey Columbia grad Sondra Perry’s beautiful, surreal, super-real, vulnerable and hilarious Lineage for a Multiple-Monitor Work-Station – a dual-screen projection and live monologue examining class, community and interconnectivity through a film project with her relatives. I was especially affected by Perry’s heart-wrenching account of how education can alienate some of us from our loved ones.

The most disability-focused event of Episode 8 was the Saturday night Miss Major interview. Major, a 74-year-old black transgender elder and former sex worker who participated in the Stonewall rebellion and became politicised in Attica prison, talked about resisting burnout as activists through self-care. She detailed how she changed all her ID back to male to actively resist passing, and decried the desexualisation of older folks. After sitting down and putting her cane aside, she declared, ‘There’s snow on the roof but the fireplace is hot! I’m still fucking here.’ Major explained disabled or elderly sex with a smile – you have your cane near the bed, the lube within reach, and in her case, ‘ I don’t stand on my hands anymore and suck dick, I now sit down’.

Overall the episode was perhaps bent too far towards U.S. politics and guests with academic credentials, yet the infiltration of (and resistance to) academia by radical people who are trans, queer, African American, Latinx, people of colour and/or sex workers is an important narrative in itself. The only real drawback to Arika is that it doesn’t happen more often – but Refuse Powers’ Grasp stimulated many conversations, emotions and ideas that will continue to grow, strengthening and energising communities both locally and internationally. 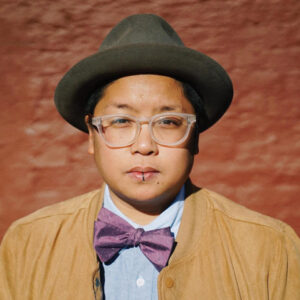 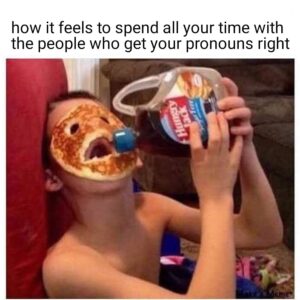 Sandra Alland introduces a showcase of memes and video art by Fallon Simard. When in Tkaronto/Toronto last September, I was fortunate to meet Anishinaabe-Couchiching First Nation artist Fallon Simard on a panel at Bi Arts Festival. Simard's stunning work examines 'state violence perpetrated on to Indigenous bodies within a context of colonialism.' As part of 'Bodies ... 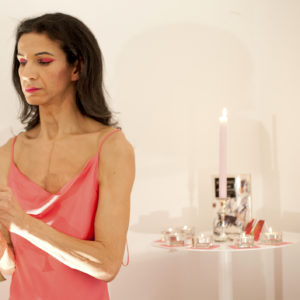 The Pink Supper – a powerful, painstaking commemoration of those who have died

The Pink Supper commissioned by LADA and The Library of Performing Rights is Nando Messias’ passionate response to a global climate of renewed religious hatred, political intolerance and violence towards gender and sexually diverse people. Review by Julie McNamara Few artistic performances stay with me for long. Nando Messias’ The Pink Supper is an exception to ...