Bethlem Gallery – situated in the grounds of The Bethlem Royal Hospital – is staging an exhibition encompassing everything from mad activism to mad citizenship, asking ‘what is there to be mad about?’ Dolly Sen writes about the curatorial process she went through in putting the exhibition together 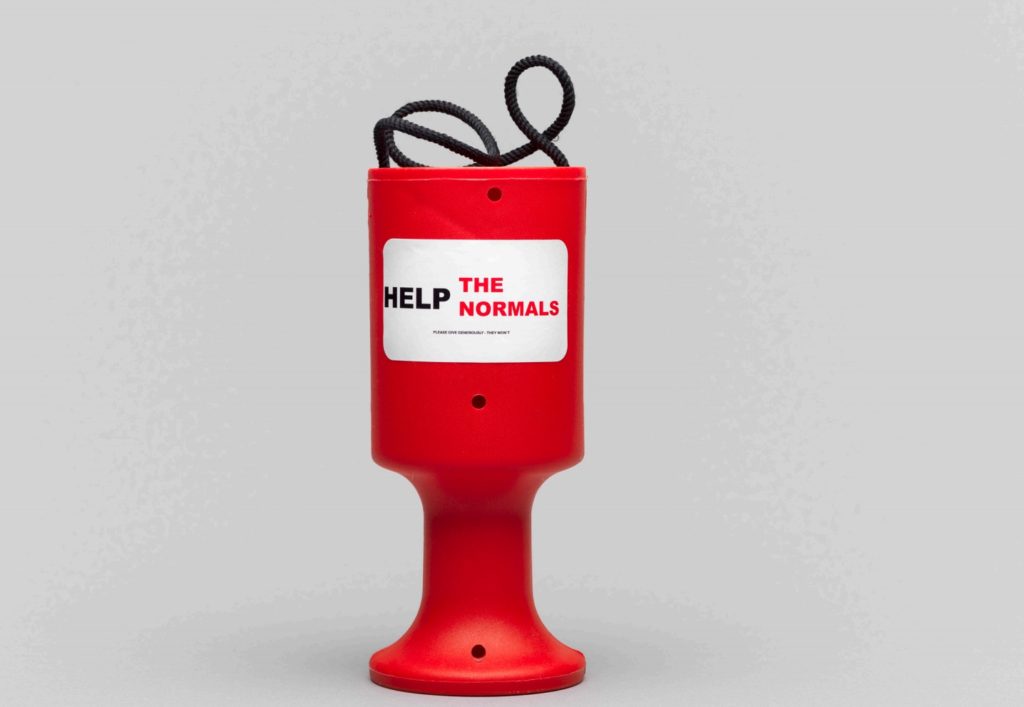 I just had my ‘What’s Crap App’ shown in the Bethlem Gallery exhibition ‘Our Future Likes’, when I got an email from Sam Curtis, one the curators at the gallery asking me if I was interested in curating a program there. He said something along the lines “We have talked about doing a show on protest art and we thought of you immediately.” I never say no to making trouble, so I said I’d love to.

I hadn’t curated before and thought it was also a great opportunity to learn a new set of skills. We had a few phone chats last winter about what form the exhibition could take. I had a few ideas, such as humour in campaigning and the history of mad activism, but instead went for a celebration of current protest, with a nod to Mad Pride and Mad Chicks for their role in making mad protest creative. It was with Mad Pride I had my protest apprenticeship. They taught me how to be unapologetic, funny and a terrible influence. Now I hope I am passing that wisdom on!

The title of the show was easy to come up with. ‘What’s there to be mad about?’ has more than one question in it, referring bot to what there is to be angry about in the world and what in society is enough to drive you insane. However, it was actually quite hard choosing the artists to be shown. Not that there were limited options, but that there were too many beautiful troublemakers to select from. I decided on a mix of established and new artists, plus the work of some mental health protest groups. Some of them I already knew, some I contacted for the first time for the exhibition. 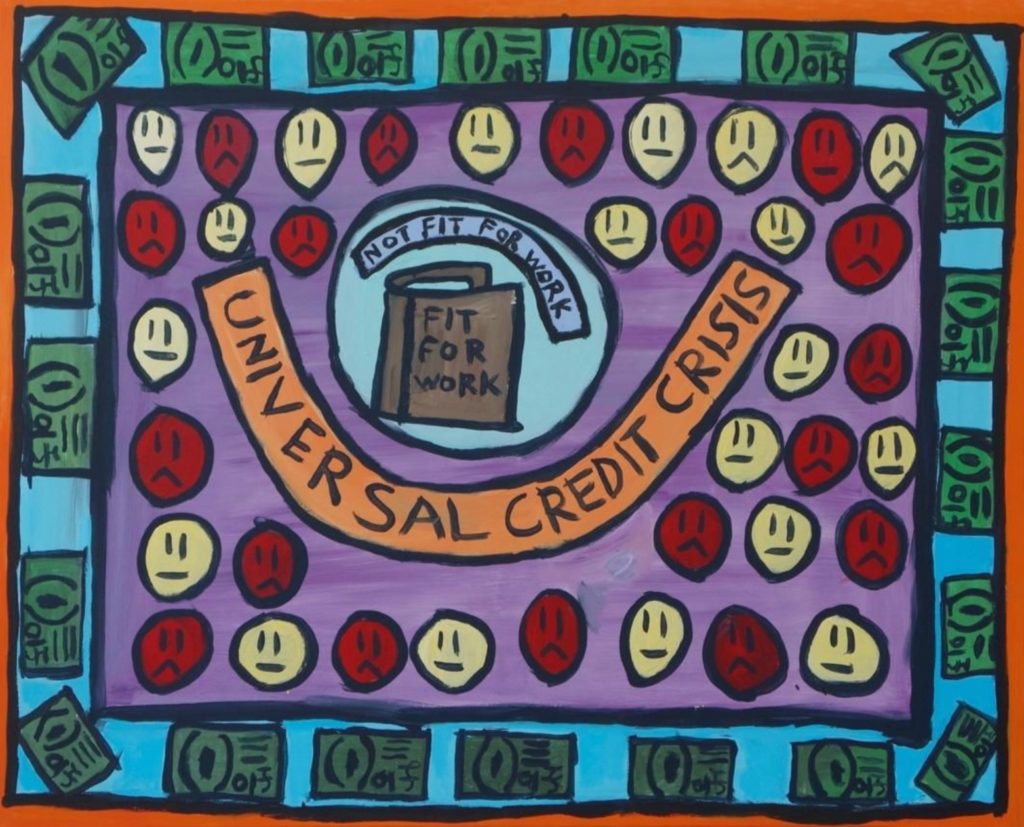 Throughout the whole process, I was guided by Sam Curtis, who is such a sweetie, but has a perceptive mind. He prodded me gently in the right direction whenever I got distracted about the task at hand. As the work came together, controversy blossomed like a fire that razed neutrality about psychiatry and current government policy into the charred remains of ‘fuck you’. This wasn’t going to be an inoffensive exhibition. Rachel Rowan Olive’s work has the word ‘cunt’ in it. Well, if the world wasn’t full of cunts, we wouldn’t need to protest, would we? We had to negotiate stuff around that, but it made for wonderful email exchanges, such as this one 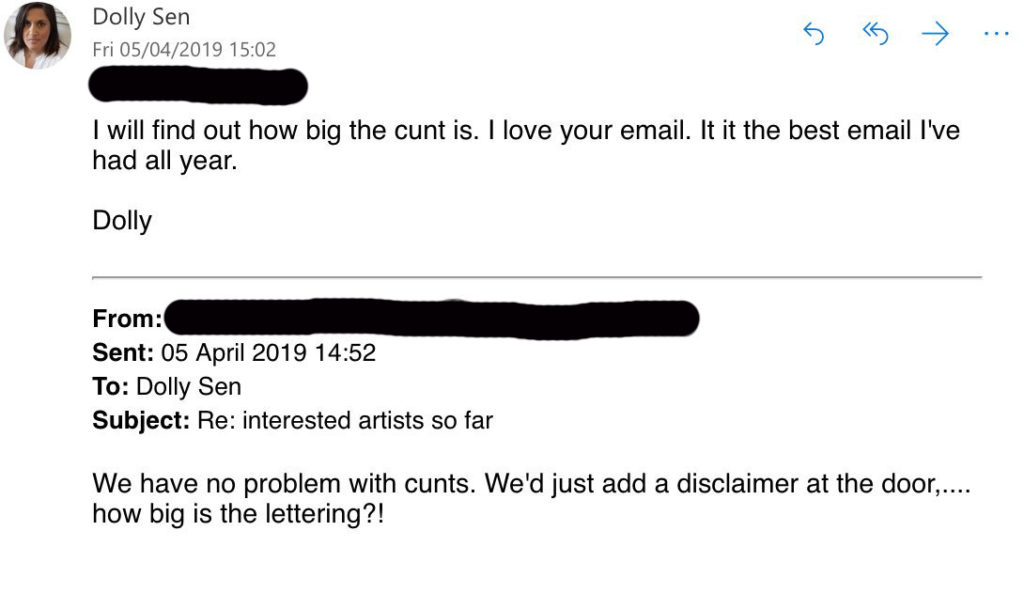 I began to find out curation is about juggling: juggling artists and their needs, collection of artworks, I found my brain confusing itself very easily until I came up with my own system to make sense of things.

I also realised you can’t curate from afar, you need to see the space to see how the work fits, and how it looks together, and should the work stand alone or link with each other. But also being in the space you can see where the gaps are, and ideas spark between the edges of artworks. One of the ideas that came forward was to set up a long piece of paper for the exhibition visitors to add their list of demands to the normal world.

Throughout the process the gallery were a support and not prescriptive at all. They’ve had some flack because it is me curating, and because some of the content of the program is very critical of psychiatry, so I think it is brave of them to give me the artistic freedom to shape an exhibition I am proud of. The only major down point of the process so far is that the artists don’t get paid for their work being shown, which of course needs to change and myself and some of the artists involved will let the funders and management of the gallery know this must be remedied as soon as possible, otherwise it becomes a tokenistic enterprise.

A lot of the work in the exhibition is urgent. It is less about mild disagreement and more about fighting for our lives, in both form and content. Our breath is just as necessary as yours. If you mess with us, we will show you how to fuck off – beautifully. 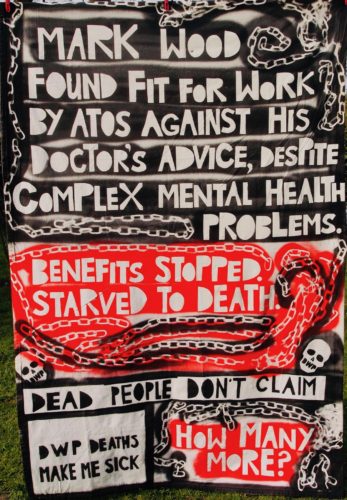 Some of the work is devastating and poignant, especially the art that forces you to feel the pain of DWP deaths or the chaining of the mad in Indonesia. There is humour in my ‘Help the Normals’ collecting can and Rachel Rowan Olive’s ‘A is for Awkward’, and everything else in between. Hopefully it will make people realise doing nothing is a political act and actually protest and campaigning can show love when there was none before.

The exhibition has accompanying events too that are linked to protest. Denise McKenna will give a talk on activism in memory of the one of Mad Pride’s founders and the indefatigable force that was Robert Dellar. Chas de Swiet and I are going to be in control of a meds trolley, dispensing music, cupcakes and poetry.

We will also put people through a mad citizenship test to see if they are sufficiently mad enough to cross the border into mad heaven and get a mad passport. I will also be creating Bedlamb there, and doing an anti-anti stigma campaign day on twitter. This is to reflect my belief that it has to have a mix of joy, trouble, mischief and cupcakes, as all life should be.

Brainstorming with Sam, we came up with the ubiquitous symbol of protest of the placard as exhibit, signage and the final question for visitors when they leave the gallery. They will be confronted with a placard at the exit asking them… well, you will have to go and see.

Brilliant article , such a shame such exhibitions are so few and far between. Tour it !!!! Hopefully such shows will be part of the school curriculum, when the new money comes !! Seriously though, mental health issues and creativity should be part of children’s education . Oh btw Crazy by Seal is playing in the cafe as I write this …a song and a sign .