Now in its third edition, Shy Radicals, written by Hamja Ahsan and published in 2017 by Book Works, is both a criticism of capitalism and colonialism as well as a set of political demands by society’s Introverts. Review by Emily Rueggeberg

“Introversion is inviolable. No person may disturb its peace or violate its freedom. The state shall guarantee: freedom from small talk; freedom from frivolous public media assaults. No one shall be required to attend or perform at social gatherings.” Hamja Ahsan from Shy Radicals 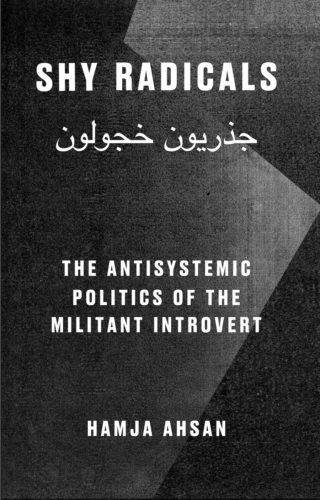 These are just a few things you can expect not to see on a visit to the Shy People’s Republic of Aspergistan: A nation-state constructed on the principles of providing refuge for Shy, Introvert, or Austistic individuals. The Shy Underground People’s Resistance Army stands ready to protect citizens against Extrovert-Supremacist states, enforcing their rights to solitude and places for quiet reflection. In Hamja Ahsan’s re-imaging of the world, the #OCCUPY movement moves from the streets into people’s homes, becoming #OCCUPYBEDROOM. There is growing discontentment within the Introvert class who see their only option of destroying Extrovert-Supremacism is to cease all capitalist activities.

Shy Radicals is a quiet polemic, satirising the world as we know it. It critiques British Colonialism as well as Islamophobia; two ideologies created and spread by Extrovert-Supremacist governments. The book covers everything one needs to know about the Shy Radical Movement and its allies, what one’s rights are and what is expected of them in Aspergistan, as well as how to spot even the most insidious forms of Extrovert-Supremacism.

The book may be far from autobiographical, but the journey of the Introvert turned Shy Radical certainly mirrors some parts of Ahsan’s life. A neurodiverse individual himself, Ahsan was thrust into the public eye as he put his artistic career to run the Free Talha Ahsan campaign for his brother, a poet and translator, who was diagnosed with Aspergers syndrome and arrested in the UK on terror charges in 2006. Talha was detained for six years, without charge, trial or prima-facie evidence. He was extradited to the United States and kept in solitary confinement in a supermax prison on death row for nearly two years. In 2013 Talha was released after taking a plea-bargain, and returned home to the UK.

Perhaps as a way to process the trauma both he and his brother experienced, Ahsan reimagines solitary confinement as a comforting cocoon, an escape from the overstimulation of the outside world.

Ahsan finds ways to lighten otherwise serious topics like solitary confinement, reimagining language in a humorous way and adapting words commonly used in Islam for the Shy Radical movement. Sharia – the laws acknowledged by followers of Islam as laid out in the Quran – becomes Shyria. Intifada – a`n uprising or rebellion most commonly referred to in relation to Palestinian protests and riots against Israeili’s occupation of the West Bank and Gaza – becomes Introfada, The Introvert rebellion against Extrovert-Supremacism. 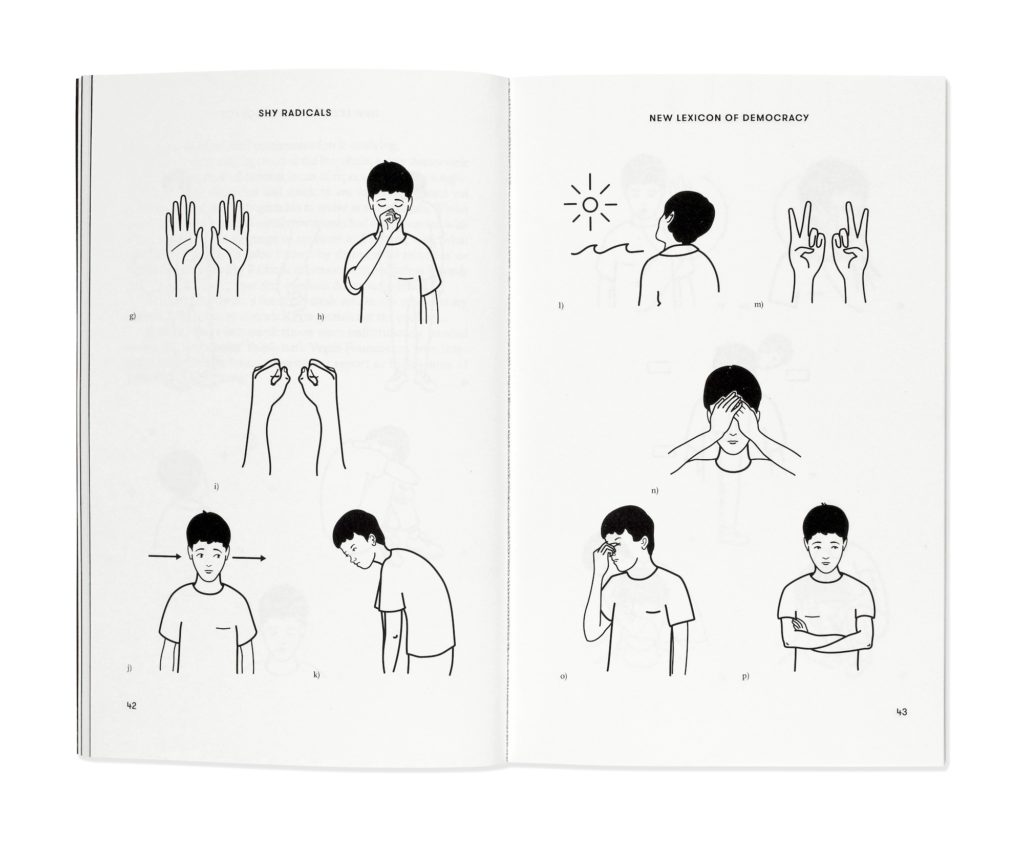 As Aspergistan sees more and more individuals defecting from their Extrovert-Supremacist countries seeking asylum, training sessions are organised for new recruits to understand the importance of a quiet nation state and why radicalisation is the only way forward in the Introfada struggle. In a modern context, “radical” has become synonymous with violence, extreme religious or political views and most commonly, terrorism. In one section titled, Shy Radicals are not a Terrorist Organisation, Ahsan differentiates the actions of Introfada members (Resistance) and those of Extremist organisations (Terrorism). Resistance is quiet, and uses the stealth of Guerilla Warfare tactics whereas terrorism is loud and disruptive. 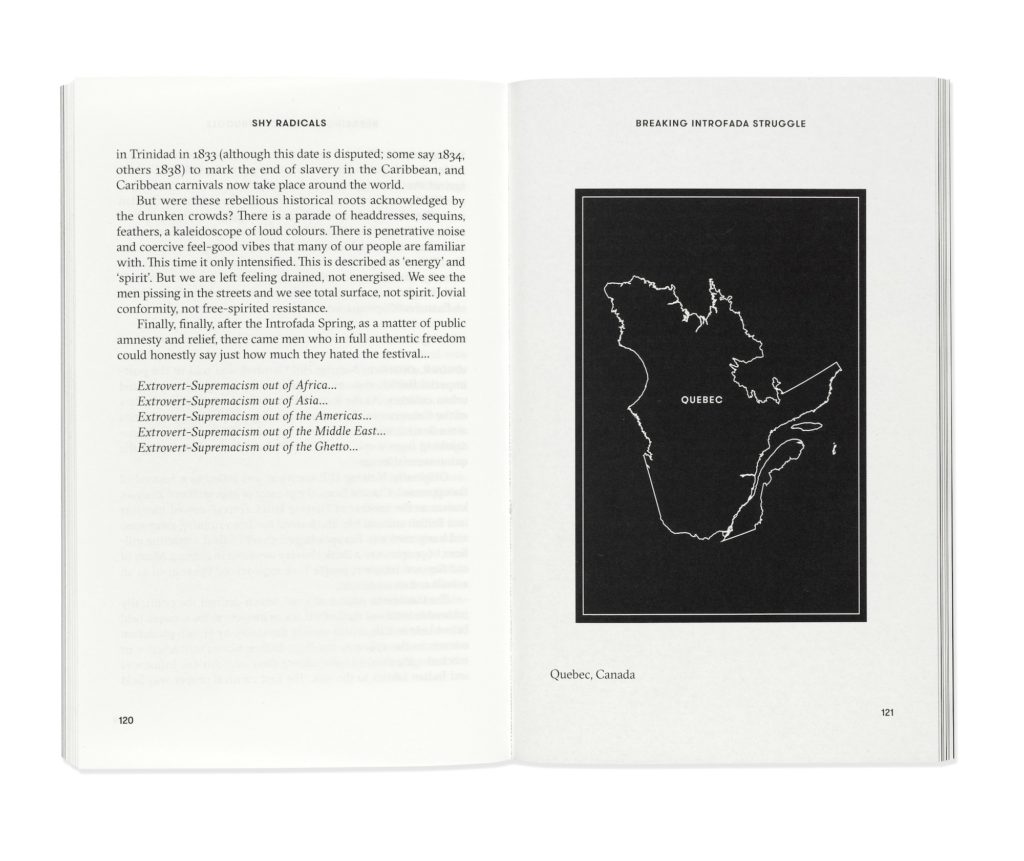 In the chapter Shy Radicals Film Season and Training Films, the Introfada uses films to illustrate the differences between resistance and terrorism to their recruits. The films in the Film Season explore topics around silence, retribution and justice for the quiet class. The Training Films on the other hand, are meant to spark dialogue amongst audience members regarding Shy Radical strategies for overthrowing Extrovert-Supremacism. The films include Heathers, Battle for Algiers and Behind the Candelabra. Each film illustrates different Extrovert-Supremacist archetypes and the ways in which they use bullying, warfare and decadence to intimidate and control the world’s population.

One of the most popular training films is Heathers: a dark comedy reimagining high-school hierarchies. The two main characters illustrate different models of Shy Radicals: The Reformist (Veronica) and The Revolutionary (JD). Veronica begins the Extrovert-Abolitionist revolt, destroying social hierarchies from the inside; tactics similar to Guerilla warfare. She decides that the ruling class of her college – three popular girls all named Heather – must be taken down for the betterment not only of the school, but society as a whole. JD sees the world in much the same way as Veronica, but instead of removing those in power, he is willing to use any means necessary to wipe out the old model (in his case, blowing up the school’s gym during a pep rally) and start from scratch. He sees nothing redeemable from the existing social structure.

Throughout the book I struggled with the dichotomy between the words ‘Shy’ and ‘Radical’. The question of how two very different mindsets could be married followed me throughout the book, from each section, interview, manifesto, and set of training materials. In the section titled ‘Vanguard Melancholia: Black-Black Power,’ Ahsan ends with a quote that, for me, was the best way for understanding the Shy Radical movement. He says, ‘We need to protect our hood. But we need not Gs (gangstas) as a solution to our problems. But Sensitive Gs. that is to say sensitive introverts that you dare not fuck with.’

Unfolding in real-time in our own world is a pandemic changing how we navigate social interactions. As Covid-19 spreads and government-mandated lockdowns stretch from days into weeks with no end in sight, the world imagined by Ahsan begins to look more and more like a reality. The global pandemic has forced the world to turn towards Introversion as we quickly realise how the Extrovert-Supremacist model has failed, and ultimately exposed us to the things we most feared. It feels fitting to read Shy Radicals during this moment in time because, whether we realise it or not, we are all protesting from our bedrooms. The book’s Shy Radicals teach us how to practice activism in isolation and the power of silence. Readers learn how to spread messages for supporting their communities and the most vulnerable in them through forms of quiet protest.

If we can take away anything from Shy Radicals, it is a reframing of how society operates and treats its members who prefer to stay in the shadows instead of the spotlight. Ahsan makes a compelling argument for the radicalisation of Shy, Introverted, and Autisic individuals who suffer at the hands of Extrovert-Supremacism. Introversion is not a character flaw or defect to be corrected. Rather, through the use of anecdotes, storytelling, and manifestos, Ahsan illustrates why we must celebrate Introversion and not punish it as anti-social behaviour. It acts as a cautionary tale that is wholly applicable to our world, creating plausible what-if scenarios for our own future.