Blind theatre-maker and performer Mandy Redvers-Rowe is on a campaign to get Audio-Description (AD) accepted as an art form in its own right. She talks about approaches to creating the additional description that is offered on TV and via headphones at the theatre, as well the range of approaches that incorporates AD, or integrates it, or plays with it, to challenge our perceptions. Currently AD is very much seen as an access tool – a utilitarian add-on, a way that people who can’t see are offered a description of the visual elements they are missing. But who determines what is important to be described and what is not? Is this once-removed viewing experience, controlled by someone else, a satisfactory one?

Recently as an AD consultant, I’ve had the opportunity to have a direct input on a number of projects. One of the most interesting being The House of Bernarda Alba produced by Graeae Theatre and The Royal Exchange. I was invited in to be part of the rehearsal process, to work with the director and writer. We wanted, whilst respecting the beauty and intention of the original script, to fully integrate the AD.

Text additions were moulded into the dialogue, and we used sound and action to increase the storytelling potential. By giving an actress loud shoes we could track her progress across the stage –giving a Deaf performer a clanking bracelet we could physically place her even when she was being voiced over by someone else. And when the full company was on stage vocally animating, we could experience some of those larger stage pictures.

Whilst Graeae has worked at integrating AD, Extant, a theatre company led and run by visually impaired (VI) performers, has taken the idea and playfully interrogated it. In their many productions they have subverted it, incorporated conflicting commentaries, re-located their audiences, put them in the dark and described action that may or may not have been taking place. They’ve generally challenged people to question not just what they were seeing but also what they were hearing. Isn’t this what theatre is about? Challenging audiences to think differently? To question what is presented and form our own opinions? Don’t we all interpret the same events differently – and if so, don’t we therefore also interpret visual information differently too? This is one of the reasons I’m keen to find ways of integrating AD when possible – to give VI audiences that independence of interpretation. Don’t get me wrong, traditional AD is not perfect, but it’s a great improvement on having no access at all. We’ve only had it for a while and we have to thank a few pioneers such as The 1990’s Octagon Theatre team of Anne Hornsby, marketing, Phil Clarke, Electrician, and blind, theatregoer Sheila Birkett, for starting one of the first services. There are now guidelines around best practice and training is offered by the Audio Description Association.

AD was introduced for films in the late 1990’s with DVDs and on our television with Digital Boxes – Sky 2001 and Freeview 2002. I know it’s possible to integrate AD in theatre – what I didn’t know, until attending an ‘Enhanced Audio Conference: Accessibility on Film, television and inter-active media’ at York University last month, is that it’s also possible to integrate AD within television and film. Here are some of the most exciting new approaches:

The best example was ‘Pearl’ by Mariana Lopez and Gavin Kearney of York University. The process adopts three principals:

I can honestly say that I felt as though I was watching the film! Surrounded by sound, I was totally immersed in a sensory story-telling experience.

Howard Bargroff, from Sonorous is responsible for the sound design in many mainstream feature dramas. He explained how he uses sound to tell stories – creating a sort of sound camera. His example showed a conversation, taking place in a medical room.

The camera viewed the scene through a window but we, the audience, didn’t know this until it pulled away and swivelled to follow the progress of the doctor who left the room and entered the corridor. The sound followed the doctor, we heard the door shut, the sound change, and someone call him. Because of the clarity of sound, the subtle use of audio indicators, no additional description was required. I simply followed the action from the view of the sound camera.

Integrated Description in Video (IDV):
Introduced by Chris O’Brien from Accessible Media Inc in Canada. The project began four years ago from research, demonstrating that many VI viewers felt uncomfortable watching AD with their families. I related immediately to this as my two daughters hate AD! However, my husband loves it! So the choice to turn AD on – or not to turn it on –depends on who’s in the room. In Canada they’ve resolved this by integrating description into the programmes. Training presenters and participants to describe what they see within their general conversation. Only magazine programmes have been trialled – they’ve not yet tackled drama.

Though impressed by the new developments, I was a little disturbed by a potential disconnect between the academics and their audiences. Ironically, the conference itself had no form of AD and most presenters used slides and PowerPoint presentation that weren’t accessible. Attendees were mainly sighted, with, to my knowledge, only five VI representatives.

So I suppose the question I need to ask next – if AD is an art form – who’s art form is it? I’m worried a whole industry based on access, will be developed and run by non-disabled people, who only use us as un-paid subjects to test out their ideas!

We need to be placed at the centre of the process, respected as equal contributors/consultants. We are the experts and have the most innovative ideas. We might not always agree on what makes the best AD – but why should we? AD is our art form, and we as artists and audiences, should be at the heart of developing this field. 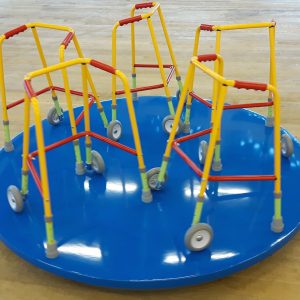 How do you ‘see’ art? How do we describe art to others? As part of the Tate Exchange programme at Tate Modern, Shape organised 4 days of events from 23-26 February, with a showcase of artwork from the Adam Reynolds Memorial Bursary Shortlist, a series of workshops led by blind and visually impaired artists and ...