1st September 2019 saw the University of Kent hold its first-ever Autism Pride festival; run by autistic speakers, researchers and artists…. It truly is the embodiment of the #ActuallyAutistic philosophy. Reflecting on the event, neurodivergent writer Emma Robdale, considers what does it mean to have Autism Pride? And, how is it being executed as a grassroots movement? 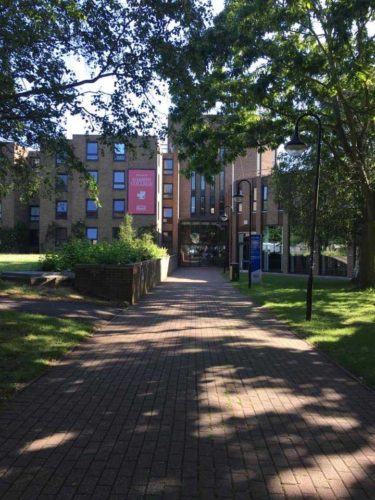 Darwin Theatre at Kent University, Where Autism Pride was hosted.

Arriving at the Darwin Theatre, home of Kent’s Autism Pride, I’d be lying if I said I wasn’t nervous. Nervous, because despite being ND (neurodivergent), after spending over a decade ‘masking’ my differences, it seemed hypocritical to be entering a place where others were ‘out’ and proud. As I passed into the conference room I was greeted and handed a ‘goodie bag’, comprising of earplugs and communication badges (Red/Yellow/Green). They indicated how willing you were to be approached to chat.

Introductions were kicked off by autistic activist and festival co-host Krysia Waldock, who explained that there would be a number of speakers and that the audience should ‘Flappause’ instead of clap; developed by Autistic communities to show appreciation without causing noise. I released a few accidental claps before getting the hang of it! Listening to Krysia speak of her own ordeals masking, I realized we’d shared very similar experiences:

“As someone who denied they were autistic for many years, after not telling anyone for the first ten years after diagnosis, one of the struggles that I personally faced was the lack of good information.”

She wanted Autism Pride to be an accessible event where autistic people could network and support one another without feeling ‘othered’. Sadly much information circulating about autism is inherently medical-sounding, aimed at parents, and is about children (often male), leaving many autistic/ND individuals feeling alienated.

“I wanted to help create a place where people didn’t have to mask… where I didn’t feel dirty.”

I approached Krysia after her speech and discovered she was doing her own PhD on autism, spirituality and religious/humanist groups; concerned that autistic people are being demonized and rejected in these communities. Soon to start my own studies, it was of comfort to know that other people are expanding upon nuanced areas within Neruodivergent culture studies as well.

“We know all autistic people are different. We don’t expect everyone to get along with each other. But this is a place for people to just be themselves without reproach or judgment.” 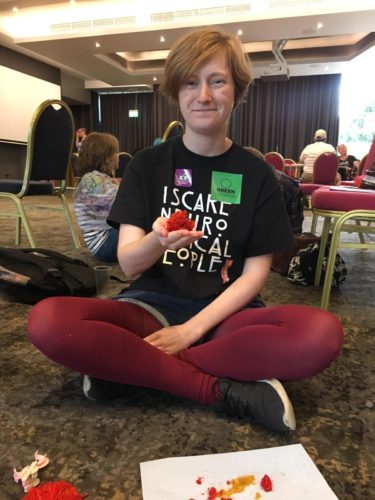 Inside the conference room, where people could make crafts.

The moment Krysia finished her speech I was whisked off to an improvisational comedy workshop I’d signed up to. Hosted by Nathan Keates, who’s conducting his own research on Improv Comedy and whether it can reduce anxiety for autistic individuals.

“Improv is all about acceptance… and if we’re not accepting the strengths of autistic people, we’re certainly lacking. At improv workshops autistic people can be surrounded by people who accept them, have fun and socialize with different communication styles.”

I’d done a bit of improvisational theatre, but it was years ago. I started awkwardly, and I couldn’t think of anything funny to say in the first game called, Yes, And…. “Yes, and… we’re standing on a floor…Yes, and there’s a ceiling above it…” After a few games I got into it more, and ended up dating a colour-changing dinosaur… blasting people I didn’t like out of a volcano to the moon, and making plans for a new car park while being on fire… Not to mention being a vengeance-seeking rabbit hunting ingredients for human pie! It was lovely to participate in the range of creative activates at Autism Pride, as it’s so important to be able to relax, decompress, and have fun.

Playtime was over… It was time to watch the exciting array of speakers, all of whom were autistic artists, activists and academics…. I was lucky enough to just catch Sara Jane Harvey, otherwise known as ‘Agony Autie’, because of the advice page she runs. An incredibly passionate speaker, topped with blazing blue hair she lurched unashamedly into the assaults faced by Autism communities,

As well as being angry that the vast pots of money dedicated to Autism are not being received by autistic collectives to build community, Sara also discussed how many autistic people’s coping mechanisms are being medically stigmatized. She argued that repetitive behaviours, such as stimming can be a form of playing, or releasing tension, and that therapies such as ABA (often disliked by autistic communities), that seek to reduce these ‘behaviours’, are damaging. 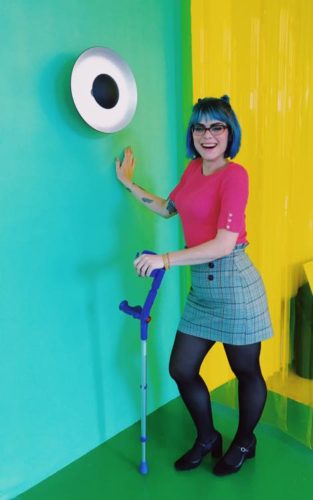 “The psychiatrist says, ‘That’s not normal… they’re just spinning a wheel around and around on the toy car, they should be pushing it around on the ground, pretending their parents are in it!’, so the child’s play gets pathologised as ‘detached’, ‘lacking empathy’, ‘lacking imagination’,… when in actuality the child is just playing!!! They’re interested in the physics of how it works! Pathologising play denies Autistic children, and adults, the basic human right to express themselves.”

Autistic people need the support and advice of other autistic individuals. Doctors, psychiatrists, teachers and parents need to listen to Autistic people’s experiences. It’s not an exaggeration to say that, without this, irreparable physiological damage is being done to new generations of autistics.

Though this was a pride event, Sara did not shy away from discussing that Autistic people are amongst the highest suicide risks. Here she had found a ‘small cluster’ of people who accepted and supported her through her own difficulties. Her voice soared, and she was close to tears when emphasizing that Autism Pride needed to be bigger than just a few events, and needed to be accessible to autistic individuals across the UK. She didn’t want to read another newspaper article that detailed a lonely and preventable death.

“You don’t get to decide what kind of autism you’re proud of. You bring up the whole of the community… or none of it!”

In her speech she touched upon a sore subject; autism/Asperger’s elitism. A mentality which creates a division between those who are seen as ‘useful’ autistics, as above autistic people who may face greater communication barriers. Sara firmly believes that these internal prejudices are not only damaging but a betrayal, and are not welcome at Autism Pride. Advocating that the whole community needs to feel safe and accepted, Sara stressed that there is still a huge ableist rhetoric against Autistic people.

“Currently we (autistic individuals) don’t ‘have a seat at the table’. We don’t even have a table! We need to build it. It can be whatever table we like!!! The table can have holes to climb through, spinning beads to twirl, a swimming pool…. But it will be ours.”

Sara was followed by a very different speaker, George Watts, who’s researching autism herself. Straight-forward and to the point, she discussed a rather controversial topic; Autism Research Studies, and how the Autism Community should participate in them. Many Autistic individuals are reluctant to engage with any scientific studies because of the harmful (and awful!) experiments littering autism history, such as Leo Kanner’s theory of refrigerated mothering, Wakefield’s (disproved) study linking vaccines to autism, and Hans Asperger’s possible involvement with sending children to concentration camps… 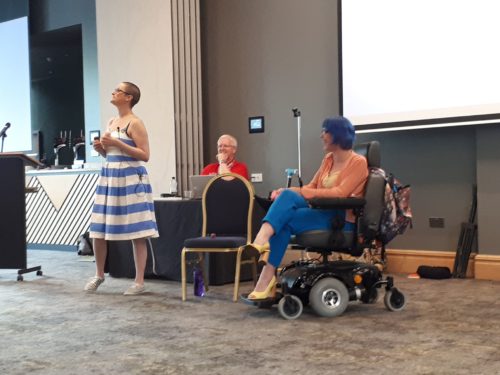 Sara – Agonie Autie – and Chloe facing questions from the audience

George did caution against participation in studies focusing on autism genetics, which theoretically could be used to eradicate autism. Her presentation drew attention to the significant tensions surrounding autism; autistic individuals against researchers, and also autistic parents who set themselves against autistic individuals (and vice-versa). George wanted these groups to bridge their gaps and work together, believing people’s combined energies have the potential to make stronger, more empathetic and better-funded organizations.

The last speaker, Chloe Farahar, tackled the stigma surrounding Bi-Polar, Schizophrenia and Autism (which her own PhD is on). She spoke about her autism inclusion group, SoYoureAutistic. Chloe and her ND team meet with Autistic/ND students at schools, universities and workplaces, reassuring them of their potential, and combatting instilled shame. As she spoke I thought, ‘I wish something like that had been available when I was growing up!’ Instead of having to hide my own difficulties and develop crippling anxiety. Having more groups like this would be absolutely life-altering for other ND individuals.

It was relieving to hear discussions on real day-to-day issues that ND and Autistic individuals experience. There was no tired ableist rhetoric…I was watching activists, artists and intellectuals striving to change the climate of Autism, and it filled me with excitement at starting my own studies.

But… I’d become overloaded! Though the speakers were engaging, I was finding things difficult to comprehend, and tripping over my own words. Many Autistic speakers expressed similar feelings. If they got at all muddled, they simply stated, ‘Executive Function’, then continued. Executive Function Disorder; I hadn’t known that there was a word for something I often felt… and it wasn’t ‘slow’ or ‘broken’.  At Autism Pride people were given the space to be listened to, even if they had difficulty speaking, needed notes or stimmed between words. I took a walk to clear my head…. and decided I was done for the day. 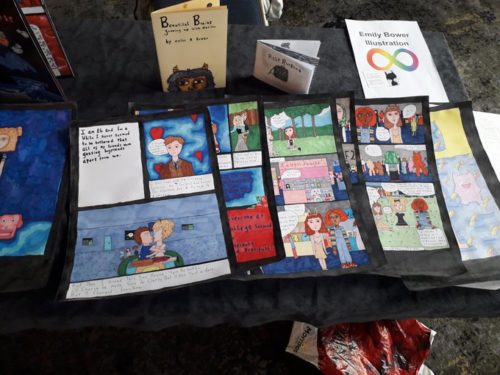 Sitting on the bus home, though I’d enjoyed listening to autistic singers, watching autistic illustrators, and generally chatting, I realized that unfortunately a lot of Autism Pride was still focused on undoing autism shame. It’s still early days, but right now, having places for autistic people to find and connect to each other is a good start. However, for there to be a notion of true Autism Pride there needs to be a massive societal shift away from mere ‘Autism Awareness’, and a real focus on real autism inclusion and acceptance,