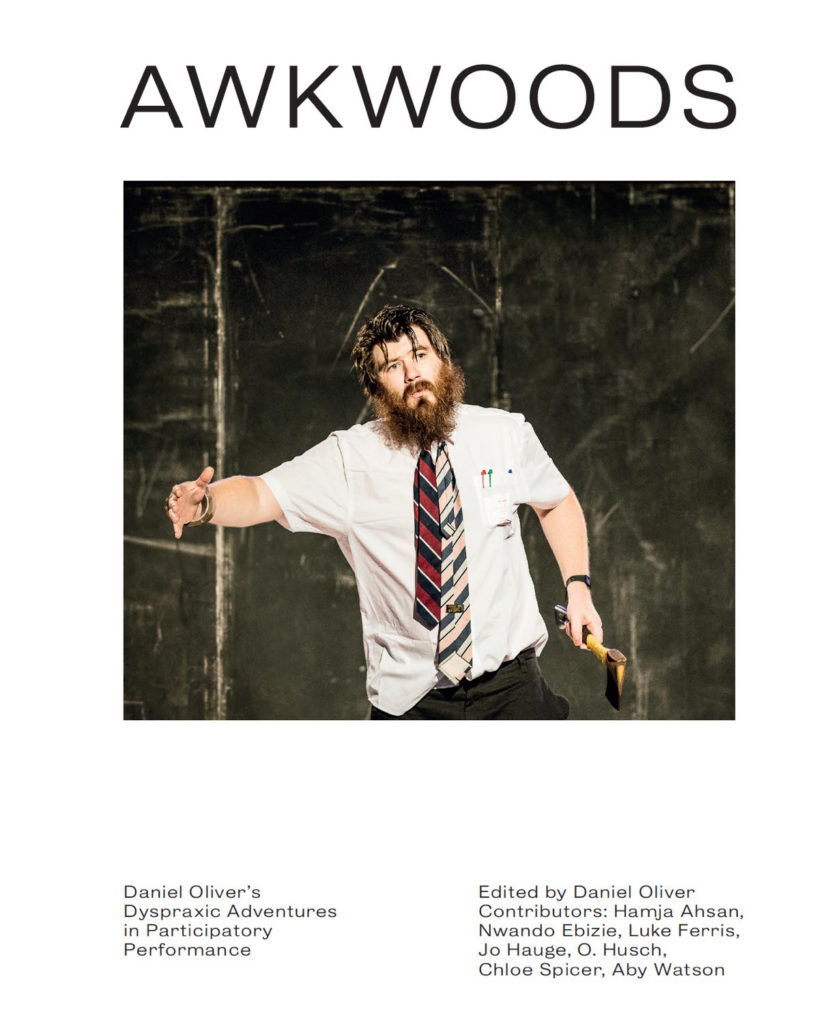 ‘Awkwoods’ carves out a place for dyspraxics within performance; we’re here… and we’re awkward! Awkward… intrinsically one of the most profound, universal, and revealing fundamentals of human existence; Daniel believes that it isn’t something to be avoided… rather strived for! Who hasn’t felt awkward? Each chapter is written by a different neurodivergent performer, expanding on how dyspraxic qualities seep into performance and script.

Daniel Oliver is dyspraxic, he’s a performance artist and teacher… he’s also awkward (Awkwood/Awkwad). Firmly believing that these qualities are intrinsically linked, he reasons that ND/dyspraxic individuals find themselves more commonly in ‘Awkward’ situations. Why? Because dyspraxics can relate to information a bit ‘otherwisely’… leading to what can be deemed as inappropriate, distracted, irrelevant, tangenty, or ‘off the wall’ discussion…

“Problems arising from these aspects can be mistakenly perceived as a result of laziness, imperviousness or intentional antagonism.”

Daniel explains how, because dyspraxia is a hidden difference, wider societal groups can shun ND/dyspraxic individuals within discussions… and this leads to ND/dyspraxic individuals feeling unwelcome or unable to contribute. However, this isn’t the case within Daniel Oliver’s performance classes! … ‘Awkward’ is fully encouraged, and incorporated; in fact, it’s viewed as integral to the creative process.

Daniel starts his introduction with: ‘Seven Reasons Awkwardness is Great!’, expanding upon how the quality helps people question their positions within societal structures… e.g. why was that weird? …. and he also clarifies how it can be central to the creational stage of performance….

“4- Awkwardness is great when it’s a contingent outcome of a spontaneously awkward situation involving awkward people that embrace rather than overcome. […] It celebrates ambiguities, flux and multiplicities of styles, atmospheres and tones!”

He believes ‘awkward’ can influence the flavour and humour of a performance, allowing people to explore aspects of themselves that are often overlooked and avoided. Being ND myself, I unequivocally concur that, on occasion, I’ve experienced mass mortification after expressing something unintentionally strange/jarring (who hasn’t?!)… but certainly, at points, it’s instilled an unwillingness in me to join groups or projects. Someone commented recently, “You’re so weird… and awkward! I love it!” I now tend to bond with people who make similarly strange (and occasionally inappropriate) interjections… and this is essentially Daniel’s ethos to performance; ‘What can awkward people, combined with more awkward people create?’

Daniel reasons that if wider society becomes more embracing of ‘awkward’ as a quality, it’ll lead not only to a better acceptance of difference, but also to more bizarre and thus thought-provoking conversation (and theatrical production!). Why cut it off prematurely? Embrace the awkward, roll with it! Invite it to your birthday!!!

“They say just go fucking wild!… but then I actually do, and I’m asked to leave. It’s like you’re in a free space, a sex dungeon for example (and that’s just an example). They’re like, “Welcome! Do what you want,” … and then you do something, and it feels lovely BUT, everyone suddenly stops. They’re looking at you, like, ‘What are you doing?!”

Daniel brings real experiences that have caused people to feel estranged into his participatory performance workshops; encouraging the ‘awkward’ to be ‘natural’, and resulting from ordinary situations and interaction (as opposed to being forced or purposeful). Workshops involve 1-3 days of intense lock and sleep-in sessions with co-contributors and participants in order to accelerate maximum ‘awkward’ scenarios,

“I really enjoyed the experience, but thank god it’s over!’ – participant from Awkwood’s participatory performance workshop.

His writing humorously bends into stream-of-conscious tangents, he’s even titled a chapter ‘Digression’. Daniel illuminates upon how he, and others who are dyspraxic/ND, have difficulties with Executive Function Disorder; “Managing myself, my time, my resources, my writing…” (For me this is so true, it hurts!). However, Daniel firmly believes that this way of somewhat haphazardly relating to the world ‘dyspraxicly’ ebbs positively into the overall ethos and philosophy of neurodivergent creativity.

This isn’t your average, ‘On Performance’ book… it’s a laugh a line spiritual guide into the perspectives of ‘Dys-practice’ (filled with puns!). You get to read about participatory performance projects where everyone but Daniel Oliver (and one assistant) die… and are left fending for themselves in a wood, with three musicians.

Chapters range from: ChiperlataARTparty (one word… spelt differently throughout the book!), to Weird Séance, and The Extended ND Universe. Each detailing a different ND/dyspraxic artist’s peculiar performance work, including their script and methods behind the madness; “Please don’t eat the sausage… just hold it in your mouth” …. why, one might ask?

“It’s to do with the post-apocalypse pre-neurodivergent revolution fun times! (AKA ChiperlartaARTparty.)” 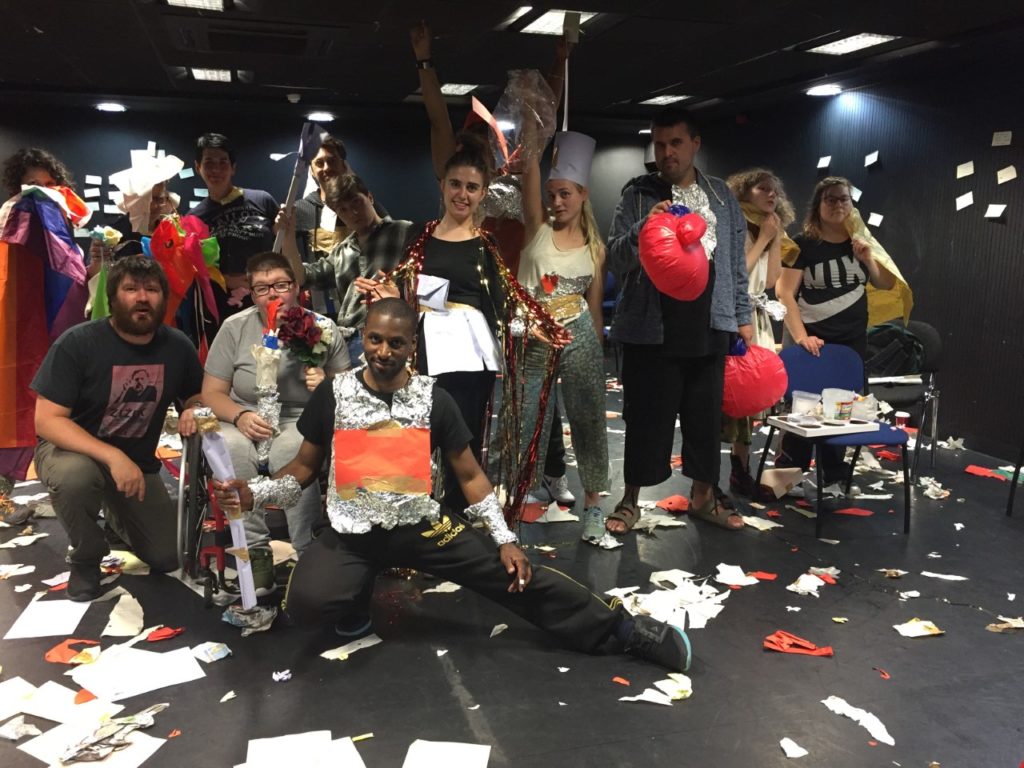 Daniel sets out to create a book neurodivergent friendly to its core… he’s made the pages green to be welcoming/readable to ND/dyslexic/dyspraxic readers who may find white distressingly bright (see Irlen Syndrome). Hoping that the book will entice dyspraxic/ND reading practice, he adds, “We encourage dipping in, out and jumping about!” and attempts to fully encapsulate the dyspraxic experience within ‘Awkwood’s’ pages. Dyspraxic/ND individuals can feel shame and low-self-esteem due to not always being able to interpret information quickly and efficiently, however Daniel reasons that his experiences have actually forced him to become more confident,

And now he’s facilitating spaces in which hopefully others can feel more self-assured too. But this comment on needing reexplanations really struck a chord for me; many people don’t fully realize that dyspraxia/dyslexia effects memory and how information is processed … I ask a lot of things twice, and often need things written down (then occasionally lose the paper it’s written upon!) … leading to some people making assumptions I’m unmotivated, purposely unorganized, or just plain stupid…

To combat these misconceptions, I’m conducting my own research on neurodivergent/dyspraxic writing styles… So, what really captivated me about ‘Awkwoods’ was that it isn’t only ND friendly regarding accessibility, but also in tone. Daniel captures a dyspraxic/ND ‘vibe’, and explains that, other than proof-reading the book for spelling, he didn’t enforce grammar, change the structure or edit writers’ contributions– instead he encouraged tangents and grammatical difference; each author incorporates their own particular ND narrative fingerprint, potentially leading the writings to read more akin to the way ND individuals think… their neurodivergence isn’t being corrected away. 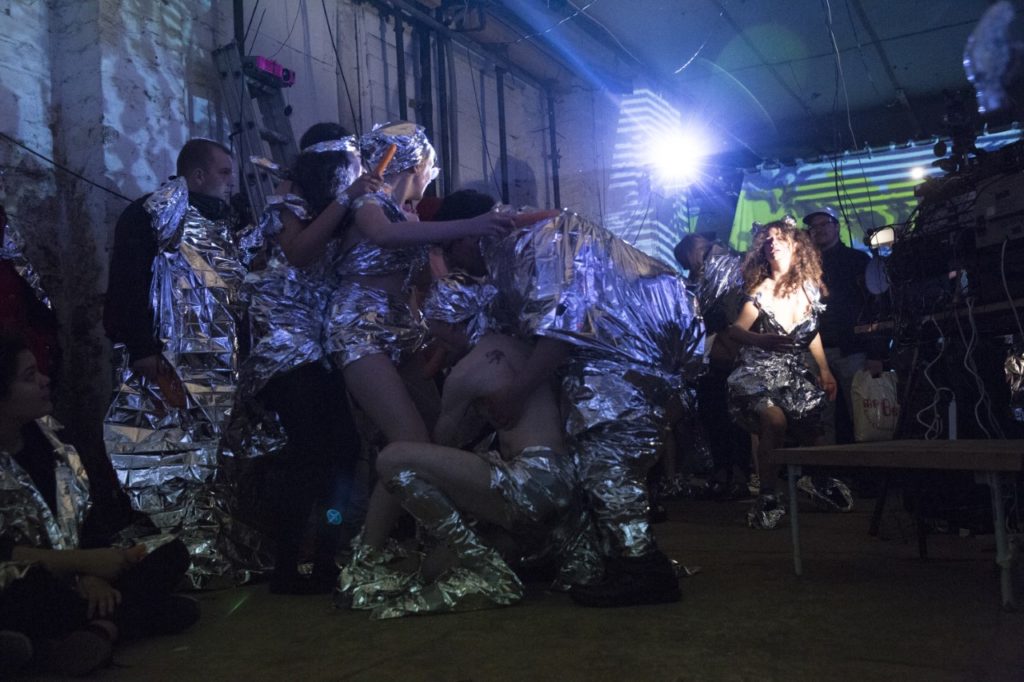 Wrapping up the end of the night at ChipolotarARTparty. Buzzcut Festival, Glasgow, 2017. Photo by Julia Bauer.

Segments of the book are presented in script, parts autobiographical, whilst other contributors have chosen essay form; all detailing a multitude of wacky and amazingly madcap theatrical theories and projects, but my ultimate favourite…? The last chapter: ‘Alternative Ways to Read the Book’, by Chloe Spicer. It states, ‘Some of you have read the book… others have just flicked to the end.” I expected a list of serious and practical suggestions to how the book could be studied… instead, it suggested I could grind pages down and snort them for information, as well as to,

“Loudly push the book across a long table, make a kind of slushy wooshing noise as it slides… try picking the book up, start licking the spine, tentatively at first, but then really get into it.”

Pages were detailed with similarly outrageous ways to digest the content… But ‘Awkwoods’ isn’t odd for the sake of odd; it intends to liberate a word that’s described and oppressed ND/dyspraxic interaction… Daniel encourages ‘Us’ (the neurodivergent community) to revel in our faux pas, and advocates for wider society to become more lenient towards wordel difference and perception. Daniel Oliver’s writings are zany, at points clumsy, blatantly weird and a whole lot of awkward! A must for anyone interested in how and what Neurodivergent brains create. This book is a start to Dyspraxic actors and artists recognising and claiming their place as ND performance artists, instead of seeing dyspraxia (and awkward) as something that needs to be overcome.

In other words… welcome to the Dys-Utopia!
If you’d like to see more, or buy the book.

On Neurodiversity is a new Study Room Guide by Daniel Oliver. It contains a collection of recorded conversations with neurodivergent artists working in Live Art and performance, a list of resources relating to this field and a contextualising essay by Daniel.

Interesting article, although I am not sure this is for me.