Musician and composer Baluji Shrivastrav OBE, talks with Natasha Sutton-Williams about his latest project Raaja-Ajaar commissioned by Unlimited and made in collaboration with poet Linda Shanson. 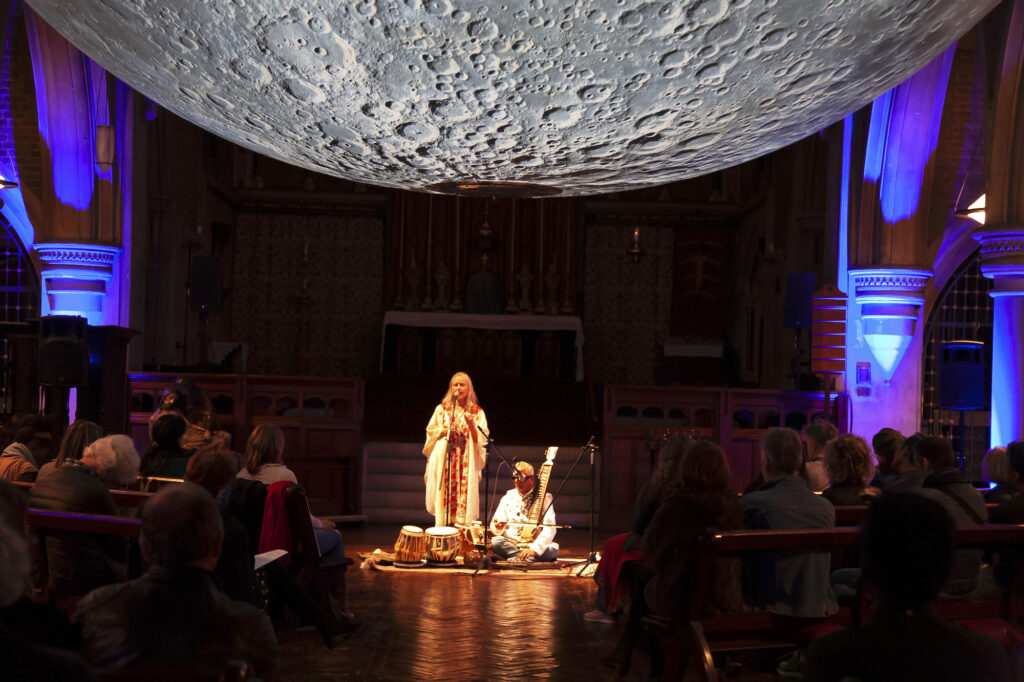 Baluji Shrivastav OBE is one of the most versatile Indian instrumentalists in modern history, excelling in sitar, surbahar, dilruba, pakhavaj and tabla. Established in the Hindustani classical tradition, Shrivastav composes for film, dance and theatre, blending the sounds of Western orchestras and Indian ensembles in his mellifluous work.

He’s been described by the Evening Standard as the “sitarist to the stars” and for good reason: Shrivastav has recorded with Massive Attack, Madness, Doves, Amorphous Androgynous, and performed with musical icons including Stevie Wonder. If that wasn’t impressive enough, he collaborated and performed with Coldplay for the closing ceremony of the 2012 Paralympic Games. But it’s not all glitz and glam for Shrivastav; the majority of his work amounts to the forensic study and internalisation of different musical genres, and pure, hard graft.

“When I work with great musicians, I really learn from them. And I’ve learnt a lot! Indian music is melody music. We are rich in melody. Western music is harmony music. When you mix melody and harmony together it creates something wonderful. Bollywood is a modern example where the songs are full of melody and harmony. They have taken tunes from the West and adapted them for Indian music.”

Commissioned by Unlimited, Shrivastav’s latest project is a new composition that accompanies an original epic poem ‘Raaja-Ajaar’ – about self-discovery, with text written by his wife and collaborator Linda Shanson. Given these momentous times, the poem’s action is set in an abstracted place of withdrawal from the world.

“I composed pieces for the poem then invited musicians to perform them. I gave the performers guidelines and they played piano, guitar, mandolin, and cello. Linda narrates and also sings in some places. I’ve done a lot of work but there is so much more work to be done because it’s such an epic poem. My feeling was that this project was the best thing to do in lockdown because we have to really discover what’s happening with us. It’s the unlocking of the mind. We don’t know when it will end. We are discovering how to live without support.”

Championing the talent of disabled musicians is at the heart of Shrivastav’s work. In 2008 he and Shanson created the Baluji Music Foundation to encourage and recognise the achievements of blind and visually impaired musicians. As their main showcase project they founded the Inner Vision Orchestra, an ensemble made entirely of international blind and visually impaired musicians, who perform across the globe together. Shrivastav was awarded his OBE for his services to music and as founder of this seminal orchestra.

Shrivastav is one of the best-known Indian musicians out there. But how did his musical career begin? “I’m a born musician. When I was two years old, I used to sing Bollywood songs just by listening to the wind-up gramophone. I was blind at the age of eight months. My father was taking me everywhere to meet doctors. Finally, my father was told about a blind school in Gwalior in India. He took me there aged six to see how blind people study. The headmaster was so impressed with my singing and harmonium playing that he wanted me then and there! My father decided that when I turned ten l would enrol. But the headmaster said that in four years I could learn so much! “Why would you waste his four years?” I was immediately enrolled. I was 300 miles away from my home, learning all this music, playing in the blind school orchestra, which had about 28 performers. I was learning composition and then given the responsibility to compose for the orchestra.”

So when did Shrivastav discover India’s most illustrious instrument? “One day when I was playing banjo, my hand brushed against a beautiful instrument. I said to my teacher, “What is this instrument?” He said, “Oh, this is a really big instrument. You can’t play it because it’s very difficult.” I insisted because I liked its shape. I cried and cried and finally he gave it to me. As soon as I got it I started playing film songs and some of my compositions on it. My teacher was so happy that I had picked it up so naturally he said, “Anybody can play the banjo but the sitar is made for you.”

Shrivastav is not only a world-class musician and composer, but is also an inventor! He has designed a revolutionary new technology for blind and visually impaired musicians to sight-read music.

“As musicians we have to learn how to sight-read. That is very complicated for blind people. First we have to write music in Braille, then read it, learn it, memorise it and play it. So it’s very difficult! It’s not like sighted people who can just look at the music and play. I had a think about it and designed hands free Braille music. It works with vibrations being fed to your arms. Both arms receive a vibration: the vibrations pulsing down one arm gives you the tempo and rhythm, and the vibration down the other arms gives you the tone of the notes.”

Shrivastav continues: “At the moment, someone has to operate this device manually but I want it to be automatically operated. I want to incorporate a microphone in the machine, so when you say ‘page one, bar 28’ the machine is voice activated and takes you to that bar. In an orchestral setting it could be activated by the conductor. Everybody in the orchestra would have this equipment. In the rehearsal when the conductor shouts ‘bar 126’ the machine would automatically take every player to that bar. The machine is currently very good for rehearsals. But when you are learning music, practice takes such a long time. I’m thinking we should let children use this technology so they can learn music faster and more easily.”

It is clear that whatever Shrivastav puts his mind to, out comes sensual magic.

Look out for plans to perform Raaja-Ajaar next year when hopefully live performances will be happening everywhere once more!

On Sunday 11 October at 4pm Baluji Shrivastav OBE invites you to the international release ‘keep-a-PART-Y’ of recent albums ‘Seasons of India’ and ‘Indian Classical Interactions’. Please register on eventbrite to receive details.

You can find more about the Baluji Music Foundation on the website.

You can also follow Baluji Shrivastrav on Blind TV

To discover more about Unlimited’s commissions and how to apply, please visit their website.