Kristina Veasey’s research and development project with the Forest of Dean Sculpture Trust mixes basket-weaving with stories about the current social fabric of the forest. The artist talks to Colin Hambrook about the ideas behind the Unlimited-commissioned project and explains just how far a research project can go.

Kristina’s artistic practice has been on a rollercoaster of a journey since the inception of Basketcase – a residency with the Forest of Dean Sculpture Trust, originally set up as a partnership with Unlimited in Spring 2019. The artist’s ideas stemmed from the discrimination she’d faced when leaving university in 1995 with a degree in Social Policy and a disability. She was told it would be better if she signed on sick and consistently referred to daycare services where basket weaving was offered.

When the residency in the forest came together, Kristina thought this would be a chance to learn about the forest, its people and the industries that forged the landscape, as well as to reclaim basket weaving. It represented an opportunity for her to move her practice from the inside to the outside and to extend her interests in land art and making things from natural resources. 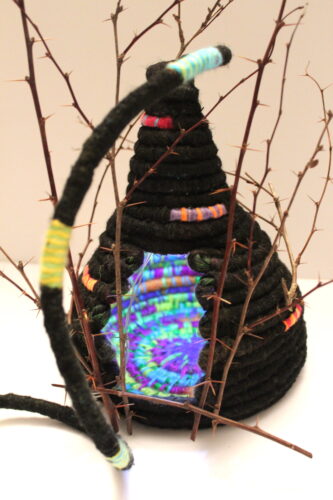 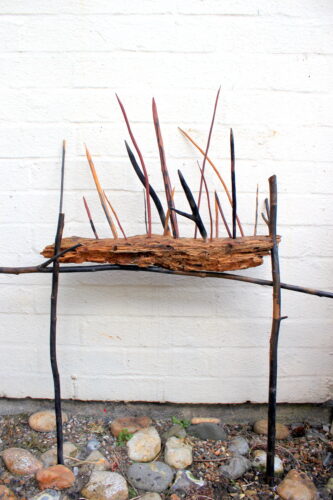 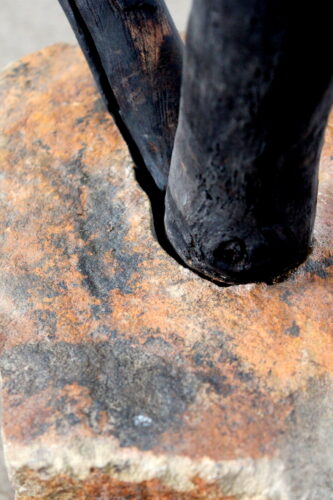 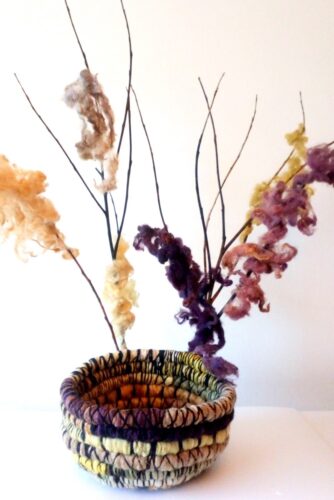 “I like the seasonal changes, working with nature and although I initially identified willow as a material to explore, I soon abandoned it, partly because it no longer grows in the forest and partly because I found weaving with it took too much of a toll on my body. So I shifted to using other elements from the forest.”

However the form of the basket represented conceptual themes revolving around dichotomies of barriers and protection – and so Kristina kept returning to the idea, determined to incorporate the object in her outcomes for the project.

“There are a lot crossovers. When I was thinking about making baskets, it is like you’re putting bars in place. You’re creating a cage. So the question is when you are creating something that you step inside so that you’re looking through bars, are you in fact being protected by those bars? Or, are you forming spaces between bars that you can look through and see things from different perspectives? I liked all those elements.” 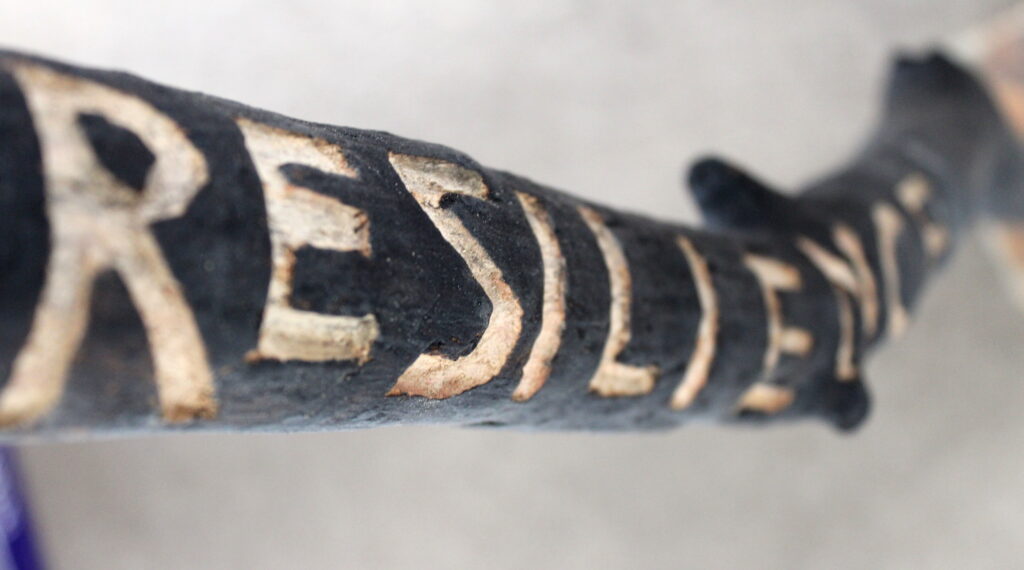 The realities of the forest management became a part of Kristina’s research, looking at the systems for plants and trees hosting new life, the importance of decay in encouraging new growth and understanding the checks and balances between protecting endangered species and ensuring the trees are unharmed by the wildlife.

“There’s a harmony and a natural balance, but it’s also being helped by the Forestry Commission’s management of it. And I think isn’t that how society should be. You know, we shouldn’t be saying to people at 21, you can’t get a job because there are too many barriers in the way. We should be removing barriers, so people can fulfil their potential and thrive and become who they’re meant to be.”

Key to the research has been meeting people and recording the stories of those who live in the Forest of Dean, who are passionate about protecting the forest and its traditions. Kristina has been weaving the stories of the forest into the work she creates. The forest is a unique place surrounded by both the river Wye and the Severn. There is ancient woodland in the middle and three different types of mine underneath: ochre mines, iron mines, and coal mines, as well as flora and fauna that is unique to the place. The research process has involved using branches, bark, making dyes from plants, and fleece from local sheep.

“The ochre colours range from hues of yellow to hues of purple. These colours are also prominent above ground with ochre coloured lichens, and ochre waterways rich with iron from the mines. I have reflected these colours in my work; painting ochre powder onto branches and recreating the colours through natural dyes made from hedgerow plants.” 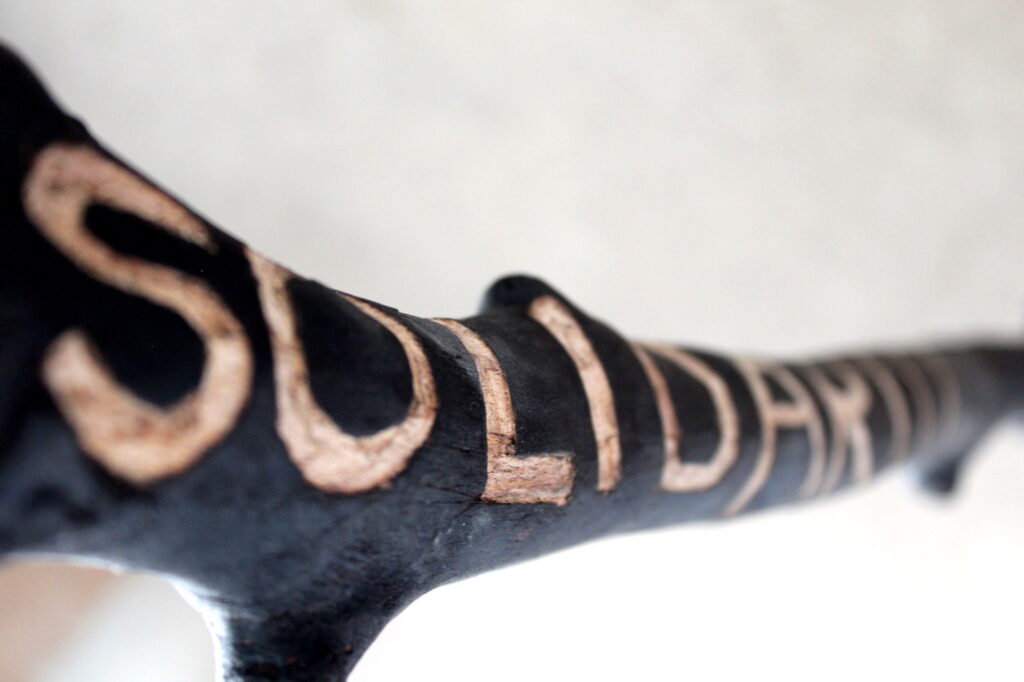 Kristina’s aim has been to unearth and amplify the unheard voices from life within the forest. She spoke with many local people, gathering stories of its history, but found it much more of a challenge to find the voices of women and of disabled people, despite the region having an above national average number of working age disabled people on benefit, living there.

“A major strength in this R&D has been working with artist producer and Director of the Sculpture Trust, Cathy Mager. Not only was she able to direct me to key areas of heritage to explore and people to speak to, but as a Deaf person, there was an instant solidarity and understanding of the challenges in having to navigate barriers and find access solutions. It has been an important aspect of the project to record how it is that disabled peoples’ stories don’t feature in the local narratives. In a place which has poor transport links and has a landscape that is physically inaccessible, it is perhaps no surprise.”

“In a way this research and development has challenged me to rethink the way that I work. Usually I have an idea and think what’s the best way to portray that idea? And then I set about doing it. Whereas this has been the other way around: it has been about working with the stuff of the forest in order to find the ideas that are central to it.”

As the research and development process has moved forward so plans to complete pieces of work have begun coming to fruition. Kristina is creating a large sculptural basket, made from forest branches that have been blackened with a shou sugi ban technique – an ancient Japanese method for preserving wood. The basket is being built around an iron frame, so as well as the connection with the charcoal burning history of the forest it also connects with its history of iron mining.

Through the process Kristina has been collecting the voices of the people she has met throughout the whole R&D. Some of those voices have been captured on audio some of them have been through email, some of them in responses to surveys, and some have just been conversations that Kristina has had in person.

“Once the basket is made there’s a confetti cannon that will explode from it, and the confetti is going to be made of all the words of the people that I’ve spoken to. It will be a celebration of the resilience and solidarity found in the forest. The idea is that it will reflect the heritage of the landscape and the people of the forest.”

Gradually things have developed and morphed despite the delays and cancelled sharing of the work as a result of lockdown. There are exciting plans afoot to produce an interactive, audio-visual, sculptural installation piece by filming the explosion from within the sculpture and adding audio of the voices from the forest.

“I have finished making a video about the R&D, my connection to the Forest, and response to lockdown. This is in lieu of a presentation I was due to give at the Arnolfini as part of an event that was cancelled because of lockdown. Alec Finlay (son of artists Sue Finlay and Ian Hamilton Finlay) was also going to present about his own increasing difficulties in accessing the rural outdoors as a result of ME. He has also made a video which I’m looking forward to seeing.”

In addition, the Forest of Dean Sculpture Trust is planning to site a snaking bench Kristina is designing and planning to make with oak steam bender Charlie Whinney. The idea is that the bench will emulate the winding of the rivers, as well as being a metaphor for the life of the forest itself.

The research and development process has given Kristina an opportunity to be ambitious and to develop further ideas for making socially-engaged work. Before lockdown the artist had a bad accident, meaning she was confined to bed for two months. She continued to wind wool around rope and to snip and stitch willow. A stack of sticks was propped against her mattress, coiling rope dangling over the bedstead. Her duvet was covered in bits of fluff and bark and started to resemble the forest floor. Every time her leg had a spasm, everything flew everywhere.

“In literal terms, I was an artist immersed in parts of the forest, but I was still very much stuck in the domestic, in the indoors, in my bedroom, with the stark realities of a commode next to the bed and a bedside table full of medications. And I found myself just wishing I could be transported to the quiet and stillness of the forest. To be amongst nature, to feel the cool breeze across my skin, to hear the rustling of leaves in the canopy. I pictured myself laying back in my bed surrounded by trees and ferns and bathed in dappled sunlight. I thought how much easier it would be to see the forest if I could just magically transport myself, bed and all, up and away and into the forest. A real-life bedknobs and broomsticks moment!”

The original themes of Basketcase around barriers, resilience and solidarity have moved towards planning for the next funding application to make work that provides a way for others to access the forest in new ways, and for the forest to travel to new destinations using projection mapping as a tool.

Kristina sees this piece as being not just specific to the Forest of Dean, but of giving people isolated from nature the opportunity to be immersed in different natural landscapes. Where will the magic bed travel to next? What will it discover? Online versions could serve as a collection of different forest areas (or even beyond forests to other landscapes). There could be extensions using VR, making it a more portable art piece. Kristina’s imagination has no limits.

Great to read about your work, Kristina and interesting to hear about where it may be going re engaging with those who cannot access nature x