Disability is currently flavour of the month at the BBC. They’re celebrating the 25th birthday of the Disability Discrimination Act with a series of radio and television programmes, including dramas, documentaries, and discussions. Among them is a six-part series of fifteen minute monologues curated, written, performed and directed by disabled people. Review by Deborah Caulfield 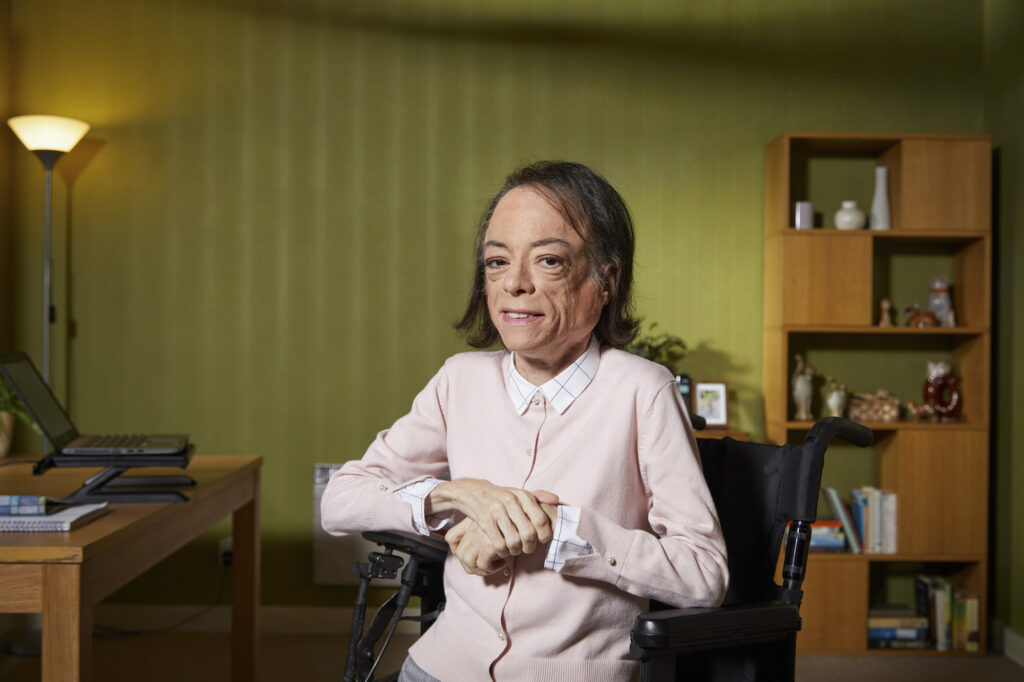 In episode 2, The Real Deal, Meg (played by Liz Carr) spends most of her time beside the window, spying on her neighbour, who she believes is pretending to be more disabled than he actually is. Meg is worn down by pain and fatigue. Her rejection for Personal Independence Payment (PIP) has turned her in on herself. It feels unfair and unjust, but she has neither the energy nor wherewithal to challenge the decision.

Like all good drama, it is full of emotion, ambiguity, and unexpected twists and turns. At first we feel sympathy for Meg. Her cocky, loudmouth neighbour, ‘White Vest’ is the villain of the piece, an obvious target for Meg’s anger and resentment. But after he helps Meg win her PIP appeal we feel more kindly towards him. She has cheered up, and we’re glad for her. But then, right at the end, she clicks ‘send’ on her laptop. The deed is done. She’s reported White Vest as ‘a definite fraudster’ on the government website.

The Real Deal has provoked much discussion within the disability community. Questions have been raised, along with a few eyebrows. Some disability activists have criticised the monologue. They don’t like the story because it doesn’t chime with how they see things. They’re baffled as to why the Silent Witness star, who is also a prominent disability rights activist, agreed to play the role.

For me, this controversy is a good sign; it means everyone involved in the programme did their jobs properly. They made good art, good drama, and great telly. And it was all made with, by and about disabled people. What’s not to be thrilled about?

There are moments of delicious send-up in The Real Deal, even in its darkest bits. This is unsurprising, given that Liz Carr began her career as a comedian. She’s naturally very witty, in the best crip tradition. Indeed, it was one of the first things I noticed, and liked, about her when I first met her in 1995, on a disabled people’s train-the-trainers course. Chatting with Liz in the lunch queue was like being back at crip school, having a laugh with my friends.

The humour is quite dark at times. In this and other respects there are clear similarities between The Real Deal and Alan Bennett’s The Lady of Letters. In fact, the Criptales series as a whole could be seen as paying homage to Bennett’s Talking Heads monologues.

Like Meg, Bennett’s Irene (played by Imelda Staunton) is also lonely figure. As her story unfolds, our view of her changes. She starts off as a complaining, busy-body and curtain-twitcher with too much time on her hands. By the end we realise (are shown) Irene is grieving and lonely, although this isn’t how she describes herself. She craves attention and a purpose in life. It turns out that what she actually needs is to be needed. Her curiosity and nosiness about other people’s lives need to be channelled in the right direction. Indeed, there’s a fine line between nosiness and caring, between self-interest and altruism, between problem-solving and shit-stirring.

Critics of The Real Deal say it sends out a bad message, that the politics are wrong. But art is about ideas, not ideology. Art is about subtlety and nuance, ambiguity, multiplicity, uncertainty. Art invites us to ponder and wonder, to find our own responses, not tell us how it is, and what to think. It’s there to prod, poke, and provoke by whatever means it has at its disposable, including satire.

What the Real Deal, and all six Criptales episodes, addresses so effectively are the big fundamental issues that most, if not all, disabled people have to contend with at some point in their lives: Power and agency, choice and control, and self-determination. These issues receive little or no media attention and airtime, yet they underpin all the struggles and worries about equality, access and inclusion. Huge though they undoubtedly are, problems with the benefits system are but the tip of a gigantic iceberg. Hence the need to go deep. Hence the need for art.

At the heart of Tom Wentworth’s writing, The Real Deal reveals the enormous problems with the Personal Independent Payment claims process, and is a central and underpinning theme. The DWP’s cruel demands, penalties and sanctions have a devastating impact on disabled peoples’ lives. Meg is not a bad person. She’s a victim of her dire situation, of which she is not the architect. She’s not to blame. If she’s unlikeable, and her behaviour despicable, maybe the system made her that way. Powerlessness and social isolation can seriously fuck you up.

Many disabled peoples’ lives have been ruined by the culture of shame and blame encouraged by the government. Many disabled people have died as a result of the appalling assessment process. All of which seems deliberate, since only 44% of new claims are successful, while the success rate for appeals was 73% at the end of 2018.

“What it [The Real Deal] bought home to me is how the assessment system is so flawed, especially for those with fluctuating conditions. But the language was hard to hear and evoked painful memories and raised painful experiences of being discriminated against and subjected to verbal abuse, and physical abuse in wider society. That’s something we have experience of. Hate crime is on the rise. So is the reporting of benefit fraud when there isn’t a case to answer and causes dreadful distress. The episode has opened up a big debate, which I’m sure it intended to do.”

Where Criptales score highest is in its authenticity. How refreshing to watch real disabled actors playing three-dimensional characters, telling their own unique stories in ways that contribute to all our understandings of the world. Finally! Look what you’ve been missing!

Oh, the relief of not having to endure the agony of seeing disabled characters, who are more often than not played by non-disabled actors, being used as plot-fodder in some non-disabled author’s fear-fuelled fantasy about what it’s like to be disabled (absolutely bloody awful!), regurgitating tired old myths, tropes and stereotypes that bring comfort to those who are terminally worried sick about ending up like that – you know, disabled. 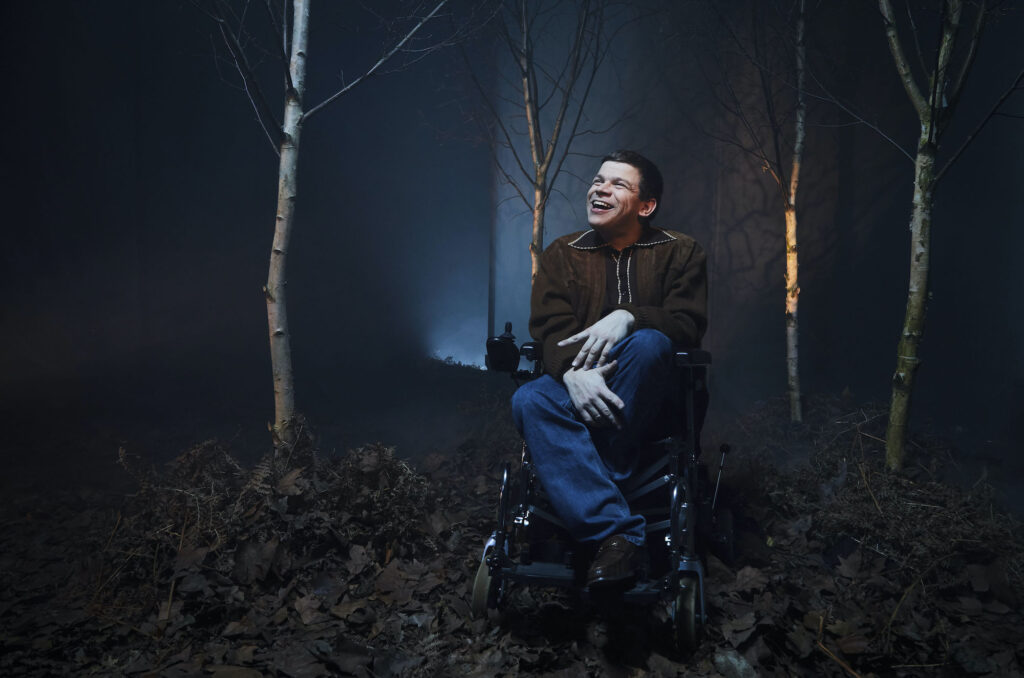 Episode 4 of Criptales, Hamish, is probably the best coming-of-age story you’re ever likely to see. In 1981, International Year of Disabled Persons (IYDP), after 35 years of being pushed around, a disabled man acquires, through fundraising by his family, his first self-drive electric wheelchair. At last he can go where he wants, whenever he wants, to do whatever he wants with whoever he wants. So off he goes, in the dead of night, for a shag in the woods with a ‘dirty bugger’. Wonderful stuff.

Doubtless non-disabled people struggle to even begin to imagine, let alone understand, what this kind of freedom means when you’ve been denied it. A decent power chair is still beyond the financial reach for many disabled children and adults. As if the means to get around independently, to interact freely with your peers, is a luxury, not a necessity. But that’s how it is. 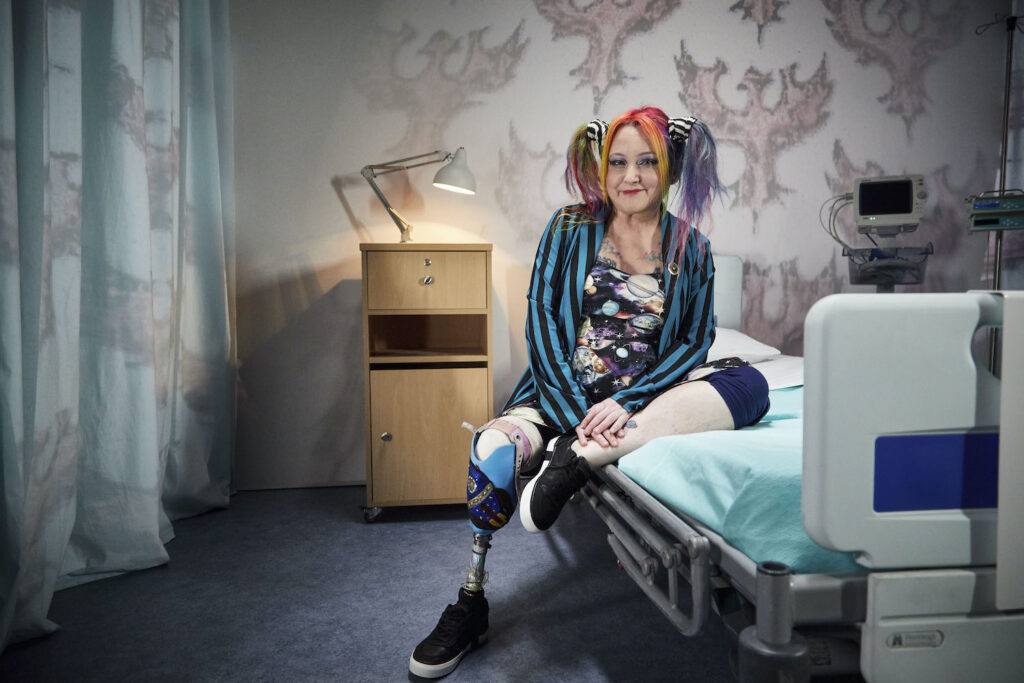 Another of my favourites from the Criptales series is Episode 5, Paper Knickers, which is about being faced with a life and body changing decision when your life to date has been determined by other people, by factors outside your control; when you’ve been drifting through life being yourself – being ‘ridiculous’. It’s what you’re used to, and it’s who you are.

Lying in the hospital bed, about to go into theatre, Jackie reviews her options; none of them seems good – blood clots, pain, leglessness, friendlessness. Then a handmade card from someone who likes her as she is, and how she will be, changes everything. Suddenly the future is not so bleak.

What I enjoyed about this episode is how Jackie articulates what is hard to express when you’re in the thick of it, the shit of it, and getting on with it. I haven’t been exactly where she’s been, so perhaps it’s the hospital setting that resonates. Or maybe it’s her class I relate to most. I don’t look working class, and I don’t sound working class, but deep down…

And as I keep saying, deep down is where it matters. Sure, it’s a dark place, but not all of it, and not all the time. In the words of Leonard Cohen, ‘there is a crack in everything, that’s how the light gets in’.

If Criptales is anything to go by, the dramatic monologue seems an excellent form for cutting through the crap and letting in the light. Media portrayal of disabled people’s issues, interests, and lives continues to be a matter of grave concern. Basically, it is not good enough. As for our inclusion in the business, don’t get me started!

People bang on about representation. I’m not interested in disabled people being represented. I want to see us being there and doing it, all the time, not just on special occasions, anniversaries and the like. Otherwise it’s just tokenism, which frankly is insulting and inexcusable.

Criptales is available on BBC 4 i-Player.

‘The real deal’ isn’t remotely good or “contraversial”, the BBC, the producers, writer, are effectively saying that fake disabled are making it hard for genuine disabled. They have played fully into gov rhetoric which is not evidenced. Its not clever or satirical its vile, and disgusting. 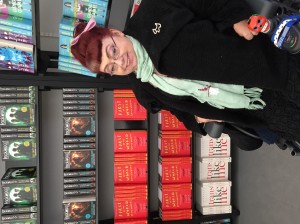 Deborah this piece is taut, passionate and in my view, spot on. A great thoughtful read and so pleased you did this. I feel too it’s about disability art/literature growing up, finding a maturity where we can disagree and create challenging contrary arts which furthers our presence of doing.
Thank you!

I am trying to understand why disabled communities have focussed on this 15 minute monologue for their ire. When there I so much to complain about in terms of disability representation on the screen … (the recent version by Zemeckis of Dahl’s The Witches with Anne Hathaway for example). Disabled talent has always been shut out and invisible in tv and film … and yet here we have factions within disabled communities crying out with a message that seems to me to ask that either we get disabled actors off our screens or we only want disabled actors to play… Read more »

I actively disliked the role Liz played. Just as I actively dislike all the moaning, whinging me first types i’ve met in the disability field. Many of us are strong, compassionate people but not all of us. Too many of us buy into the government rhetoric surrounding fraud and benefits. I’ve been watching this happening for a very long time. Is it shocking that the person Liz plays dibs in the only person who helps her in the end or is it just because the ‘bad crip’ amongst us is identified? Loved that Liz identified this character and hope that… Read more »