As part of the Unlimited Festival Southbank Centre showcased an evening of short films on 6th September. Work by filmmakers including Ted Evans, Aurora Fearnley and Liz Crow was shown, challenging established definitions of disability and deafness. James Zatka-Haas reviews.

Why has the film industry taken so long to recognise disability with greater sincerity? Unlike theatre, dance and the visual arts, which have made huge strides in better representation, the film industry still feels tied to age-old views. That disability is something that can be presented if the portrayal is surface level, often played by beautiful actors with beautiful sums of cash.

In response to this,The British Film Institute teamed up with Southbank’s Unlimited Festival to present a screening of several short films presented under the title Ripping It Up. All created by disabled filmmakers, the selection presented itself as an exploration of what film genre can do for disability; in what ways genre can present stories about the disabled condition, spearheaded by disabled writers and directors. I’ve outlined a few of the films that had a special impact: Postcard for Ted Evans’ ‘The End’

The showcase opened with Ted Evans’ The End a film that masterfully explores the disintegration of deaf culture as society pushes towards a treatment for it. Using the documentary genre, the film begins in the 1980’s interviewing deaf students in school. They talk about the optimism they feel with scientific breakthroughs better understanding what deafness is from a medical standpoint, positive that it could lead to a cure. The film then follows two students, Arron and Sophia as their relationship fragments due to opposing beliefs.

Where Sophia nudges towards treatment, Arron is adamant that Deaf culture – with its own language and perception – is something that needs to be protected, and so strives off repeated attempts to find a ‘cure’. As time progresses, we learn that the justification for treatment isn’t to ‘improve’ the lives of deaf people, but to save welfare money. It’s a beautiful film, and really proves that how we approach deafness – invariably as something to be cured – can have its own consequences.

Max Clandaniel’s Nonsense, takes an absurd take on sensory impairments. Two men who have no senses share a house. They  come across several wearable items that grant the wearer their senses – a glove for touch, a pill for taste, an eyeglass for sight and so on. They begin by sharing the items equally (each one has one glove for example) but then become greedy and want the sense all for themselves. It’s an absurd lighthearted tale that, despite the obvious narrative flaws, poses a few questions about the value of the senses, and what we’d give up to have the complete package. Liz Crow’s wartime drama Resistance portrays the plight of disabled people under the Nazi party. The film is set in an institution run by the Nazi’s and follows a female patient who sees the euthanasia plan carried out on the other patients. It’s a harrowing film. The performances are brutal and honest.

The guards treat the patients with violence and the patients, falling in terror remain tortured and submissive. It’s a film that stands out because of its honesty, because of its portrayal of an event that lingers on the minds of people, but is rarely approached in film.

The majority of the films looked at sensory impairments (deafness and blindness) conveying both the prejudices society shows towards people with these conditions and the way the conditions bespeak a creative language of their own. The films felt empowering, showing again that disability doesn’t necessarily mean a hindrance. The main problem however – and this is not necessarily a fault of the respective directors – was that the films all looked low budget. They generally lacked strong production values, and though the performances given by the actors were good, there seemed to be something lacking.

During the post-screening panel discussion with the directors, Curator of Contemporary Fiction at BFI’s National Archive, Will Massa and actor/ writer David Proud, What became apparent was the startlingly low budget these creators had to work with. This only proved the lack of viable opportunities out there for disabled filmmakers, that within the film industry there is yet to be a real drive to put disability on the map

The BFI are doing what they can, but it doesn’t feel like enough. A screening like this feels like a major step, but it’s a drop in the ocean of opportunities that are few and far between. Whilst there are efforts to make the sector more open for disability, the harsh conclusion at the end of the night was that there’s just not enough around, that little is being really done.

Lack of funding is obviously a huge issue, and I have no idea how the industry works. But low budget or not, having been made, these films need and deserve audiences. They should be seen by as many people as possible, not hidden away and brought out for ‘special’ occasions. Are they available to buy on DVD, or watch on the Internet?

Who and how many people saw the films on this occasion, and what was the reaction? 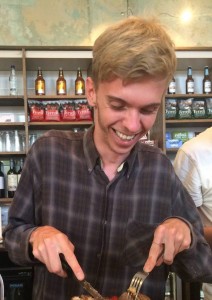 Hi Deborah, I agree. The problem with films that ‘look’ low budget is that they won’t get the attention from the people (critics, film festival organisers) who allow them to reach a wider audience. The directors, apart from Liz I think, were given around £2000 each to make their films. Compared with the opportunities open to non-disabled filmmakers at the BFI, who can apply for much more money, these grants are minuscule at best. It’s a shame because the films themselves were pretty original. They dealt with perspectives that felt empowered and new, and you can just wonder what a… Read more »