Several disabled artists who work directly with DAO are making work about the current situation of dire poverty that many in the disabled community are living in as a result of austerity measures imposed on the UK. DAO asked cartoonist Dave Lupton aka Crippen to research the reality of what’s been happening in the last decade in order to clarify information being used for campaigning or artistic purposes. 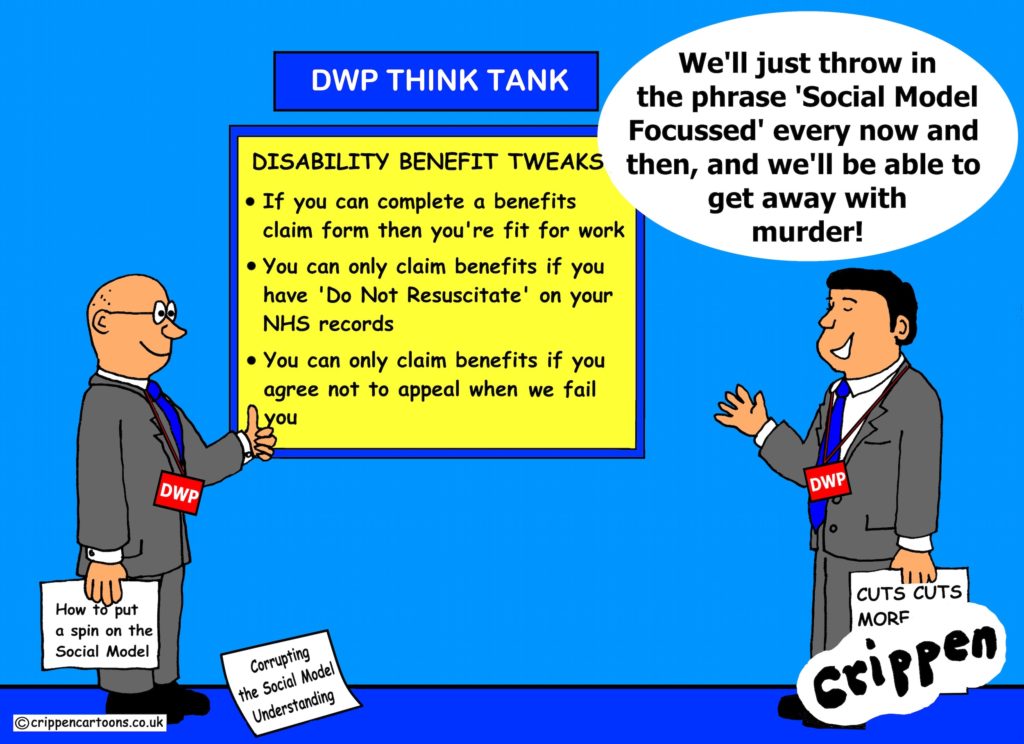 Having been recently asked to create a cartoon about the Department of Works and Pension (DWP) welfare reform debacle, I started researching just what impact this has had on sick and disabled people.

One of the most emotive issues has been the claim that many people have died due to their involvement in the reforms, especially those who have been forced to take the DWP Work Capability Assessment (WCA) for Personal Independence Payments (PIP) and Employment and Support Allowance (ESA).

These assessments have been undertaken by two private organisations, the French company Atos and the American corporation Maximus, who were awarded their contracts by the DWP. To date millions of pounds have been paid to these two corporate giants, despite many complaints about their assessment methods and the fact that 70% of those claimants they rejected, had their benefits reinstated after appeal.

Disabled campaigners believe that tens of thousands of chronically sick and disabled people have died during these assessments, with some having been wrongly declared fit for work and their claims for benefits rejected. Although I was able to verify that people have died during their involvement with the Government’s welfare reforms, and this is not only based on statements made by relatives and friends, but by the Government’s own figures, it is difficult to prove that they have died because of the reforms. It is also difficult to come up with a definitive figure of the number of deaths due to the Government’s seeming reluctance to provide this information in a clear and concise manner.

However, the figure of 10,600 deaths was substantiated by the DWP who have released data to this affect for the period January to November 2011. This was derived from administrative data held by the DWP and assessment data provided by ATOS Healthcare and confirmed that these deaths were linked directly to people having undergone the ATOS Healthcare fitness to work assessments.

Other figures released by the DWP relate to the period before assessment. For example, in January 2019, DWP minister Sarah Newton said between April 2013 and April 2018, 17,070 Personal Independence Payment (PIP) claimants died after registering but before the DWP made a decision on their claim. She also said 4,760 claimants died between their case being referred to an ‘assessment provider’ and coming back to the DWP.

Other figures quoted in the press seem to add to the confusion. For example a recent article in The Canary, quoting the same figures provided by the DWP Minister, claim that the DWP has revealed that over 21,000 sick and disabled people died waiting for it to give them benefits. A further, 73,800 claimants died within 6 months of registering their claim, during the five year period. They also claimed that the total number of PIP claimants who died topped 95,000, although I am unable to see how they arrived at this last figure.

A more reliable source, in my opinion, is John Pring of the Disability News Service, who provides some more figures for us in a recent article. He states that the DWP have revealed that 7,990 disabled people who lodged a claim for person independence payment (PIP) in the five years after the new benefit was launched in April 2013 had died within six months of registering their claim, while also having that claim rejected. Of these 3,680 disabled people – or more than 60 a month – died within three months of their initial PIP applications being rejected by DWP.

One fact I was able to substantiate however, was that complaints about the Government’s disability benefit tests have skyrocketed by more than 6,000% since 2015 according to the Government’s own statistics.

Also, due to complaints received by the United Nations (UN) about the negative impact of the Government’s welfare reforms on sick and disabled people, they undertook an investigation in 2017 led by Prof Philip Alston, The UN’s special rapporteur on extreme poverty and human rights. His inquiry focussed on the impact of the government’s austerity policies over the last eight years, in particular those people who were assessed by ATOS healthcare and Maximus for Personal Independence Payments (PIP) and Employment and Support Allowance (ESA). This was triggered by 280 submissions to the UN by a variety of groups and campaigners.

An extract from the UK Independent Mechanism update report to the UN Committee on the Rights of Persons with Disabilities (UNCRPD), October 2018, states:

“… the picture emerging from the most recent evidence about disabled people’s lives remains deeply concerning. Disabled people across the UK continue to face serious regression of many of their rights, as presented in this report. Social protections have been reduced and disabled people and their families continue to be some of the hardest hit. More and more disabled people are finding it difficult to live independently and be included, and participate, in their communities on an equal basis.”

In conclusion I think that the main thing to come out of my research is the suggestion that the DWP, in collaboration with both Atos and Maximus, have been complicit in the deaths of 3,680 sick and disabled people, who died within three months of their PIP claims being rejected and being told that they were fit for work, between April 2013 to April 2018! Not only did the assessment staff who processed these claims show a remarkable level of incompetence, but, according to those friends and relatives of the people who died, a callous and inhuman attitude when undertaking these assessments.

This is compounded by both Atos and Maximus not being penalised for allowing these errors and creating so much pain and suffering for the disabled claimants and their families. One would be forgiven for thinking that this Government were more interested in dismantling the Welfare State and ending any responsibility for people’s welfare by condoning this sort of behaviour.

i have asthma, copd and carpal tunnel syndrom, i made a claim for pip beginning of march this year (2020), it is now half way through may and i still havent been offerd an assesment appointment with atos, chances are covid-19 will kill me before i get a final desision from dwp once they get the report from atos!