Creative Future is an organisation which works to empower underrepresented artists and writers. As part of Lisette Auton’s Guest Editorship, writer Tom Smith reviews their latest anthology of short stories and poetry, Chemistry. Being a writer is a lonely life, being an underrepresented writer is even more lonely. Enter Creative Future. Literally, check it out, it’s amazing. I’ll wait.

Established in 2007, Creative Future aids the underrepresented artist by having free to enter competitions, free workshops around the country, and mentorships to help develop artists. I personally benefited when I was awarded some mentor time to help develop my submission package for my first novel. This came at a time in my life when I was questioning if I was good enough to be a writer and it gave me the fuel to keep chugging along. This was far more valuable than any cash prize. As the cliché goes, if you give a man a fish he’ll eat for a day; but teach him to fish and he’ll never starve. As a vegetarian this is sort of lost on me, but you get the point.

Creative Future is validated by its’ working relationships with the likes of Penguin Random House Writers’ Academy, Mslexia and New Writing North and New Writing South. I know that when I was recommended to apply for mentoring, these names gave Creative Future the prestige I was looking for and I knew they could help me.

As well as applying to them directly for help, they also have an annual themed competition for writers and poets. The Creative Future Writers’ Awards have been giving voice to the voiceless since 2013. Winners are announced at a high profile awards event, which in 2018 was held as part of the prestigious London Literature Festival. Winner Sadie Nott said about the occasion:

“The showcase event was such a fantastic evening. Guest hosts Kerry Hudson and Lemn Sissay put us all incredibly at ease and Creative Future supported everyone to share their searing stories and pulsating poems with the audience and all against the stunning backdrop of lit up London.”

The 2018 award theme was ‘Chemistry’, chosen to celebrate the 200th anniversary of Mary Shelley’s Frankenstein. The results were far from monstrous (sorry). I am always amazed by the range of stories that are spawned from the same prompt. This collection contains stories on race, LGBT, autism and even organ theft.

I would consider myself well read, although I have never read Harry Potter, but I do not read or write poetry, so me critiquing it would be ludicrous and I will not attempt to do so. The book is separated into two sections; the competition winners and the featured authors sections. Reading, re-reading and once more for luck, the one thing that leapt out at me was the quality gap between the winners and the established writers: there were none. The competition winners stood toe to toe with the likes of Lemn Sissy and Kerry Hudson. And I do not say that lightly.

The winner of the Platinum Prose Prize, Winter Soup by Charis Fox, kicks off the collection in style. Charis’ prose holds back and lets the reader work to figure things out for themselves. I loved the juxtaposition of coming out to a traditional parent with the understated subtle prose. An example of this was the climax of the story, which saw Ma accept the relationship between her daughter and her girlfriend. It would have been so easy to have an explosive end scene at the family party. Instead we see Ma’s quiet acceptance of the relationship by giving her daughter’s girlfriend the biggest slice of roast duck. Beautiful. The style, not the duck. Vegetarian remember? One of the common themes of the winning stories is uniqueness in presentation. Some serve the story with originality. Anita Goveas’ portrayal of a character only comfortable in speaking as if her life was an experiment is an example of the difficulties of facing the hard realities of our lives. However the presentation of some of the stories – for example numbering a story into a series of parts – felt tacked on for the sake of being different and didn’t add any weight to the story itself.

As much as I enjoyed the anthology as a whole, the last story of the winner’s section was the one that caught my eye. As a comedy writer, something you may dispute if you’ve read my work, I always feel comedy is looked on as the poor cousin of drama. This is something I would wholeheartedly disagree with; if everything is funny then nothing is funny and if everything is sad then nothing is sad. Who didn’t shed a tear when Del Boy turned his nose up at his dream of becoming a millionaire to stay with Rodney, or when Monica proposed to Chandler?

When reading competition winners you rarely see a comedy story, which is why I loved The Walk by Ava Ming; a funny tale of death and rebirth that packs as much of a punch as the other stories.

Chemistry is a sad, poignant and funny anthology that I would recommend to anyone. I would also recommend writers of short story, prose and poetry to enter the next Creative Future Writers’ Award.

Chemistry Anthology is available by clicking on this link.
Click here to find out more about what Creative Future has to offer for underrepresented writers and artists
Enter Creative Future Writers’ Award on the theme of ‘Home’ – deadline Sunday 2nd June 2019 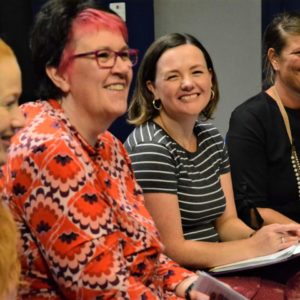 Lisette Auton & Vici Wreford-Sinnott in conversation: Is Emerging Even a Thing?

Guest Editor, Lisette Auton had an encounter with Vici Wreford-Sinnott in her role as Creative Lead on Little Cog’s Cultural Shift programme at ARC, which opened her eyes to the world of disability arts. Here was a stalwart, a doyen if you may of the movement, passing on words of wisdom. But that evolved into ... 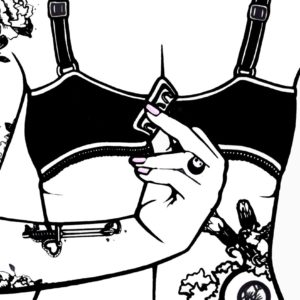 Sarah Crutwell – a woman’s place, is on the stage!

As part of Lisette Auton’s Guest Editorship, she showcases the work of Sarah Crutwell, an exceptional poet, spoken word artist and facilitator who is an integral part of the Teesside scene. Sarah had a massive part in encouraging and supporting Lisette’s return to performance and she does this for so many womxn, including those who ... 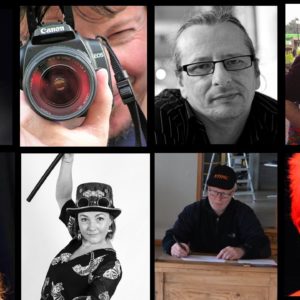 Creating New Networks and Platforms – The North East Round Table

Disabled playwright and theatre director, Vici Wreford-Sinnott writes about the legacy of disability arts in the North East region in relation to a recent round table discussion with a mix of eight 'established' and 'emerging' artists. I am passionate about being able to create phenomenal work in the best circumstances possible, on the most relevant and ...