Apocalypse Now showed the stifling oppression of war, how its devastating effects could wreak havoc on the psyche whilst in combat. Kubrick’s Full Metal Jacket showed how the harsh regime of training could lead to a mental breakdown. One film, Jacob’s Ladder, provided an insight into PTSD and the aftereffects of war, once you’re home and everything is supposed to be over, except where it lingers in your mind. However, we now have this year’s Cherry (available to stream now on Apple TV+), wherein the effects of PTSD are shown on one individual, its empathetic portrayal doing more to directly unearth the lingering trauma of the aftermath of war more than any film in recent time. 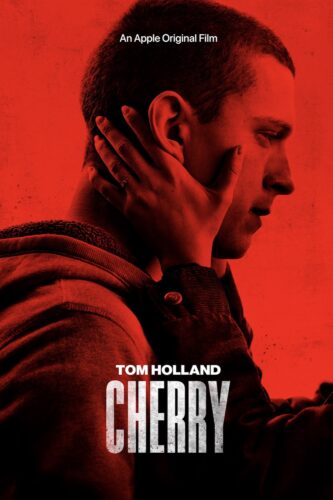 Joe and Anthony Russo’s film opens with the voice of the eponymous Cherry (Tom Holland), firmly situating us in his brain: a unique POV we rarely see in film. Here, Tom Holland is the poor man/realistic Spiderman, a regular guy thinking he can be a superhero, getting his Mary Jane. In this case MJ is Emily (Ciara Bravo), the girl who breaks his heart and spurs him into joining the army, a choice which will be catastrophic for his sanity, but in a superhero movie, would be his positive retribution. Cherry reveals how these superhero movies would be if they actually were about real people with traumas (especially traumas you’d endure getting involved with villains and crime, as real life wars are).

As firmly as we are rooted into the cinematic opening narrative of his voiceover we are taken out of it: Cherry is seen talking aloud to himself down the street, in a Goodfellas-esque way, as if the star of his own movie; what came before was nothing more extraordinary than him talking to himself. It’s the first gut to the heart in a film that continually highlights the harrowing impact of PTSD. This is something rarely discussed in society, never mind shown onscreen, despite the fact that it was estimated that PTSD affects around 3 in 100 people in England alone.

The film, from collegiate panic attacks to post-college life mounted by student debt, to intense soldier training and army life in war-zone Iraq, situates us in his subjective textured experience. From black and white Xanax dazes to the intense white hot violence of war, we feel everything as if first hand. This segues well into allowing the audience to feel an empathy with PTSD sufferers. Holland helps with humanising Cherry, his flip commentary about needing to be polite to women even when robbing them.

Cherry also shows how pressure within a culture of toxic masculinity can contribute and worsen PTSD. The fact he doesn’t want people to ‘think he’s a pussy’, whether it’s something as big as going into war or as banal as getting over heartbreak, every action is informed and worsened by the male culture around him. 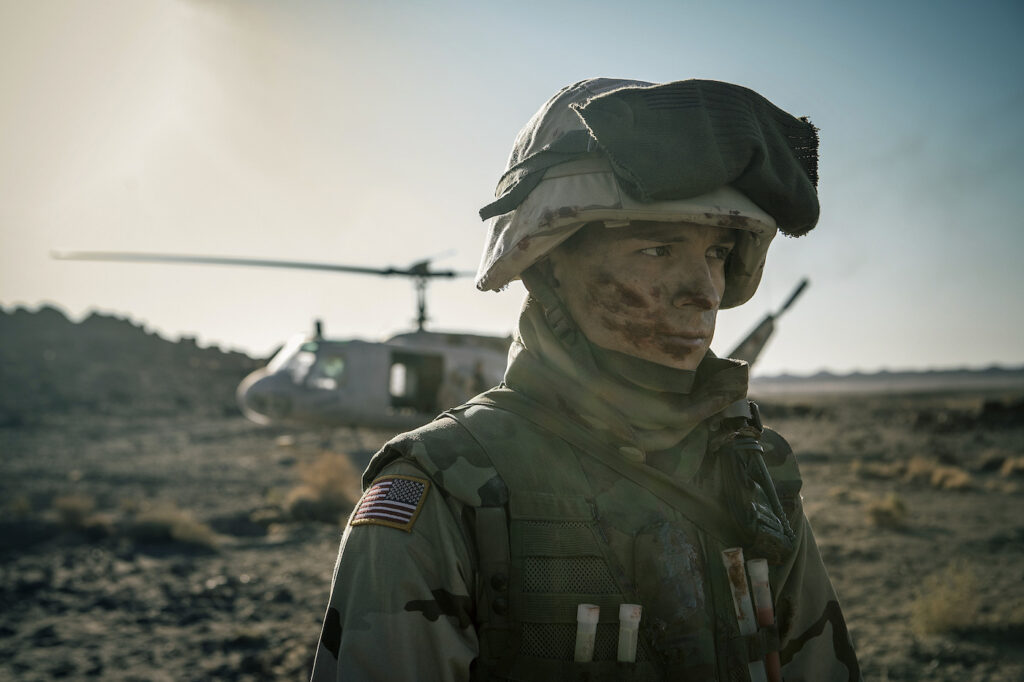 Having a mental health disorder before trauma seems to increase your chance of developing PTSD. But also, having PTSD seems to increase your risk of developing other mental health disorders. Even before the events of the film – Cherry serving, his criminality – the world around him is frayed and blurred, his hyperfocus on Emily, perhaps showing that he had a vulnerable sensitivity to begin with. He is set apart from his peers, like at parties, or with his first girlfriend Madison – the camera moving slow and ominously. He is literally one step removed from the crowds, watching from the outside.

What Cherry shows is how when issues like nationalism and war are involved, we don’t give thought to the people behind it, to the vulnerable psyches, to the way that even the most stable of feelings can snap after enduring the most horrific of violence and inflicted war crimes.

Cherry is already a sensitive soul – so where was the screening process for anxiety and for other, physical impairments (like his colour blindness?). After a heartbreak, he enlists. Yes, the film practically begs you to scream, why is it so easy to allow men to submit their bodies and minds to such distressing experiences where they’ll be subjected to ongoing pain?

Cherry may be a depressing and, at times, generalised view of PTSD and of war – its pop graphics and fast paced editing serving to distance us from the authentic and harrowing feelings of the experience. The film also shows how violence begets violence – how PTSD causes one officer to literally choke out another individual. But this could also be viewed as an offensive stereotype.

We hear time and again that those with mental illnesses like depression, psychosis or bipolar disorder are nowhere near as likely to be murderers as cinema paints or wants to paint, compared to the general population. In Cherry we constantly see violence masked with humour and stylistics. It may be that the filmmakers use these tropes as an attempt to reveal how their main character deals with trauma, downplaying it through the use of humour. However the Tarantino-esque effects and typography are effectively a distraction away from the real horrors of the lived-experience of PTSD.

Cherry is available to stream on subscription to Apple TV+