Through the use of binaural sound and moving image, Cheryl Martin’s One Woman is a multimedia piece exploring trauma and mental health. It was broadcast as part of Southbank Centre’s Unlimited Festival on 14 January 2021. Review by Colin Hambrook. 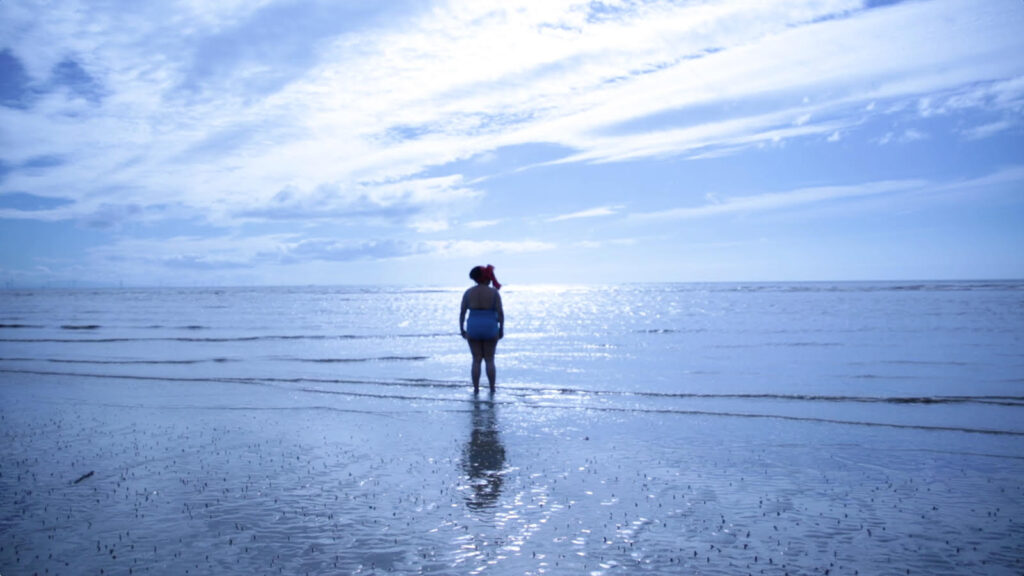 Cheryl Martin’s One Woman takes hold of your soul and wraps it in the detritus of the seashore, of the whirl of the gulls in a wind filled with the rime of the sea. The 30-minute film has a visceral, dreamlike quality. In effect, it is an art film and very much removed in genre from the play that it came from. One Woman is specifically the story of every woman surviving sexual abuse but is perhaps a vision of that inner reality conveyed from a safe space from which to look at yourself torn in pieces.

I emerged from it, bitten down on the trauma of psychiatric abuse that has defined my life… I think it’s impossible to engage with something as personal as the description of a destroyed sense of identity that One Woman portrays, without it triggering one’s own trauma, especially when it has been experienced in the early stages of childhood development. You learn to have a conversation with the shadow-selfies Cheryl Martin describes, taken on a sunny day where the sand recognises your existence when you struggle to do so yourself. Martin is a voyager into the bleak night of the soul. She takes us there, gently and with beauty so that we might feel less alone.

The film is made of fragments connected through imagery and sound – Martin performing excerpts of her poetic monologue illustrated by her image on a beach; whited out against the sky; in a room with words filling the frame in front of her. Some of the most resonant moments within the film are where the imagery becomes more abstracted and the struggle to recognise disconnection becomes illustrated by the fluttering of silken jellyfish.

At specific points we are treated to doses of science, for example: “Stress in childhood causes the frontal cortex to shrink. The Amygdala enlarges empathising anxiety.” We are at the mercy of our nature as animals. Yet somehow the beauty of a self-reflective consciousness is that we can rise through the pain and envisage ourselves in flight – as Martin does – as a hawk, skylark or a butterfly. There is something eminently beautiful about the imagery that even as it describes loss, it also elevates the spirit above it.

But then the fragments also bring us suddenly back to reality with a bump; a scene of being faced by a psychiatrist demanding you tell them what they want to know when all you can offer is silence. What right do they have to make demands when they’ve done nothing to win your trust?

At its heart, One Woman describes a journey of a search for light, a search to find a way back into the body and to feel safe there; to feel it as a home. Dancing effusively to the Buzzcocks ‘Ever Fallen In Love’ we see Martin connecting with a melancholy joy and reminding us that the deepest wounds may not necessarily heal, but that we can find ways to adapt, to find ourselves despite and because of the pain.

Michael Billington famously said of Sarah Kane’s 4.48 Psychosis ‘how do you award aesthetic points to a 75-minute suicide note?’ Well, in many ways Martin’s work moves on from Kane’s vision of the turmoil of the impact of trauma and depression and takes that reflection to a more universal space – a questioning that opens out into reflections on climate change. And when she asks ‘Who had the right to scar me?’ it’s as if the earth herself is asking why we are so intent on causing irreparable harm. Thinking about observing life from the Voyager spaceship Martin reflects “We never were the be-all and end-all.” And within that, she expresses something deeply felt about trauma as a gift – not something we would wish on ourselves or anyone else, necessarily – but a space from which truths about the human condition can be expressed with authenticity and courage.

One Woman was commissioned by Made at HOME and won an Unlimited Wellcome Collection Partnership Award. One Woman is available to watch on the Southbank Centre website until 16 January.