Chris McCausland has been performing his unique brand of observational humour across UK’s live comedy circuit since 2003. Stephen Portlock caught his recent show during a recent run at the Soho Theatre, London. At the end of Chris McCausland’s latest, typically excellent offering I found myself perplexed by the comments of a sighted audience member. Why, I wondered, did that person want more on how Chris lost his sight. It’s akin to the expectation that a gay comedian will always talk about ‘coming out’ prior to cracking jokes.

Besides, it could be argued that Chris actually had fulfilled that audience member’s wishes, explaining at one point that he wasn’t always blind. He was a web designer but then his sight got worse and worse and the websites got uglier and uglier. That’s typical of Chris – taking material that might have encouraged pathos and instead creating hilarity.

After asking his wife how she met a friend, he received a 35 minute-long reply, and she only finished speaking when they reached the front door. Chris observed that he had been dealt a bad hand: “I’ve got the wrong disability. I should be Deaf but be able to see.”

Speaking about his blindness this time around, Chris observed: “You do get used to it, right, but there are things that happen in the world around you, that you realise one day that you’ve been operating in a slightly different reality from everybody else.”

Much of Chris’s hour long set alluded to absurd misunderstandings. For example not realising that footballer Mario Balotelli is black, fantasising about Postman Pat’s son (voiced by a twenty-something woman) and hating Mr Tumble’s patronising tone before discovering that the latter was addressing Deaf children. Some of the topics might come across as a tad obvious such as an opening discussion of his goofy guide dog, but Chris’s strength lies in taking such material and making it laugh out loud funny.

Indeed part of this lies in his mastery of digression. So, for example, discussion of the aforementioned Balotelli led to inconsistencies in our language; how is it that racists are anti other races, but royalists are pro-royal?

There was also whimsy with Chris wondering why we have flavoured condoms but not flavoured dentist gloves. Yet the overarching theme was fatherhood and the awkwardness that arises out of not being able to see. That meant being potentially mistaken for a paedophile after his wife darted off after their baby daughter leaving Chris alone in the middle of a busy playground.

“How should I know? You know more than both of us at the minute darling!” thought Chris when his two year old daughter, sitting in the bath, pointed to something and asked “what’s that?” prior to plopping a handful of soggy shit in his hands.

All this might sound a bit too specific to the field of sight loss, but many sighted peers might empathise with Chris’s frustration as his wife’s pre-natal breasts became untouchable like museum exhibits. Just before this, he had elaborated on his wife’s labour – he brought in a sandwich expecting to be several hours and remained there for 41 hours – “bollocks to the health of my child. Look at the state of my bloody lettuce!”

The intriguing title Jesus Was Married And Look How It Turned Out For Him’, arose from a discussion of religion, God and of Heaven – potentially lazy targets but again amusingly handled. In fact my one quibble with the show lay in a brief anecdote about a friend of his from the past who was terrified of using the office toilets.

Chris did not imply that his friend had any specific mental illness and the anecdote was, I admit, funny but it did leave me subsequently feeling just a little queasy. Overall though Chris is going from strength to strength and I look forward to seeing him perform again. 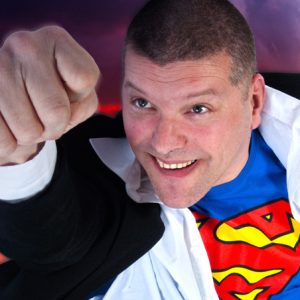 Laurence Clark has been touring his new show Independence since the spring with rave reviews from a run at the Edinburgh Fringe. Susan Bennett saw him at the Unity Theatre, Liverpool on 26th November 2016 It may have been Black Friday in Liverpool with half the street lights out on Hope Street, but the Gothic gloom ...