Claire Cunningham speaks to Joe Turnbull about Thank You Very Much, a brand-new commission by Manchester International Festival, National Theatre of Scotland and Perth Festival in association with tanzhaus nrw and Dance Umbrella. The work looks at the world of professional tribute acts as it asks ‘who have we been trying to be all our lives?’ Thank You Very Much features an ensemble of disabled performers and will premiere at the Ukrainian Cultural Centre, Manchester 17-20 July as part of Manchester International Festival. 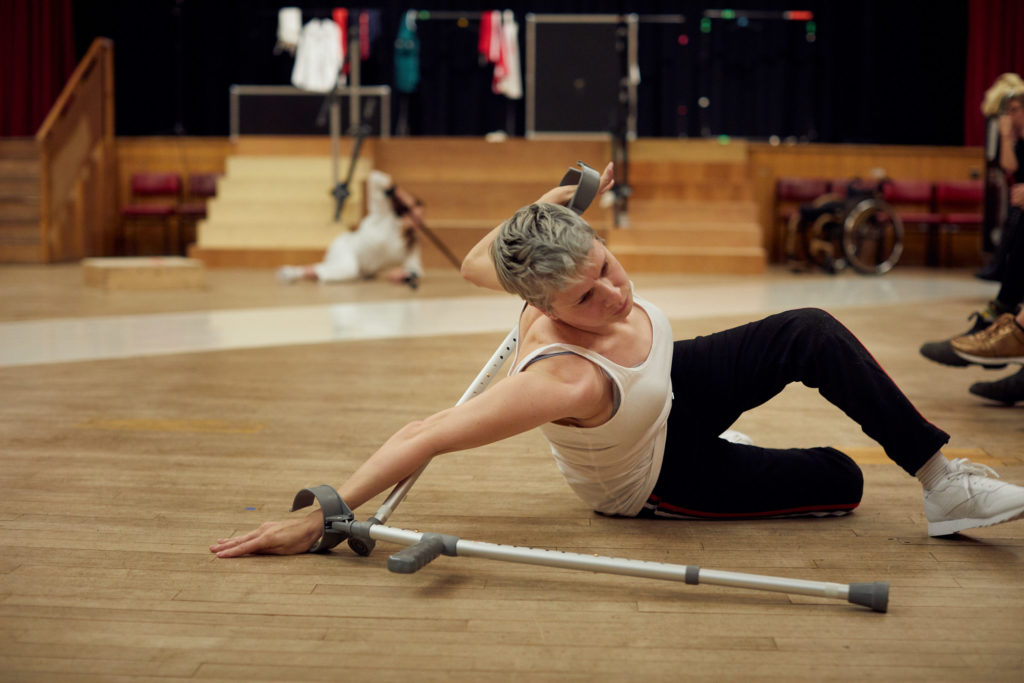 Claire Cunningham in rehearsals for Thank You Very Much. Photograph Peter Dibdin

Back in 2014, choreographer Claire Cunningham was in the early stages of research for a new piece of work. “It started by being about an interest in the movement language of Elvis Presley and then became about an interest in the idea of tribute artists,” Cunningham explains. A trip to the Porthcawl Elvis Festival played a seminal role in this shift, and in lots of other aspects of the piece. Porthcawl is a small seaside town in South Wales, but each year it undergoes a transformation. Cunningham recalls:

“It’s extraordinary and hilarious. Everything is about Elvis. From Greggs to Oxfam, every bar, every single corner of the town is dressed up, or singing songs and generally getting quite terrifyingly drunk. It’s carnage, but it’s also lovely. I went there thinking ‘this will be a bit fun, but it will also be ridiculous’. But seeing some of the really experienced professional tribute artists was a bit of a slap in the face for my snobbery and cynicism. Seeing some of the artistry and the skill, I couldn’t help relating to that as a fellow performer.

It was also about a space where people could come together to celebrate something they loved and they wouldn’t be ridiculed for it. There was something about that sense of community that sort of reminded me of the first time I went to DaDaFest. Some of the work was really high quality, but also there’s a respect for just giving it a go.”

Compared to religious views on disability (Guide Gods) or Hieronymous Bosch’s apocalyptic paintings (Give Me a Reason to Live), Elvis Presley and tribute acts feels like quite jovial source material. “It has been inherently fun,” enthuses Cunningham. “I love the fact we had professional Elvis tribute acts in dance studios, like The Place. The next day they have body-mind courses and very somatic practice. But I’m in there with someone who is showing me their big belts and they’re singing away.” 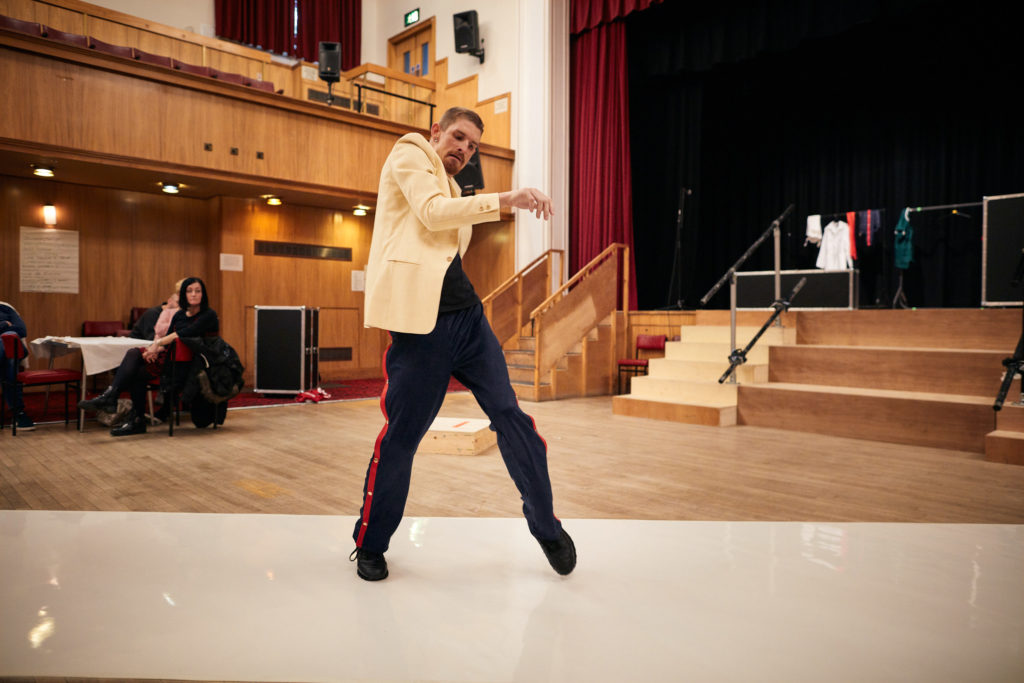 Dan Daw in rehearsals for Thank You Very Much. Photograph Peter Dibdin

But when Cunningham expands on the ideas underpinning her research interest, it’s clear there’s some real weight grounding the piece.

“When I looked back at Elvis when he was young, as a choreographer, I saw movements which I related to as having connotations of crip vocabulary. He uses what you might call broken lines in the body, there is very little straight arms and legs in the way that he danced. It’s all quite distorted, disjointed and there’s a lot of isolation of ankles and wrists. I could see some movements similar to my own body.

But zooming out further, the way that he moved – which was appropriated from black communities – was considered disturbing to the social norms at the time. That really reminded me of the experiences of so many disabled people – your body is read as a disturbance either in the space that you enter or to societal norms of how bodies are ‘supposed’ to move.

Zooming even further out is this idea of spectacle. The idea of being that recognisable and being that much of a spectacle everywhere you go is another common experience for disabled people – you might as well be walking round in a full Elvis, rhinestone-studded jumpsuit – even if all you’re doing is getting on the bus or having a coffee.”

The interest in looking at tribute acts started out as quite a practical concern. “I was interested in how Elvis moved, but I didn’t want to learn about it from video,” says Cunningham. “I wanted to learn from people who tried to embody it. How it felt and how they would explain or try and teach it. That’s at the root of the piece.” As part of the devising process, Cunningham and the rest of the ensemble have been learning from professional Elvis tribute acts – to take in the movements and gestures.

As the piece has developed, the notion of the tribute act has itself taken on thematic significance for the piece. “Elvis is one of the few figures who has become famous as a body, not just a voice,” explains Cunningham. “Everybody thinks that they know what he looked or moved like. This idea that there is a mythical body that you should look, move or sound like felt significant from a disability perspective.” 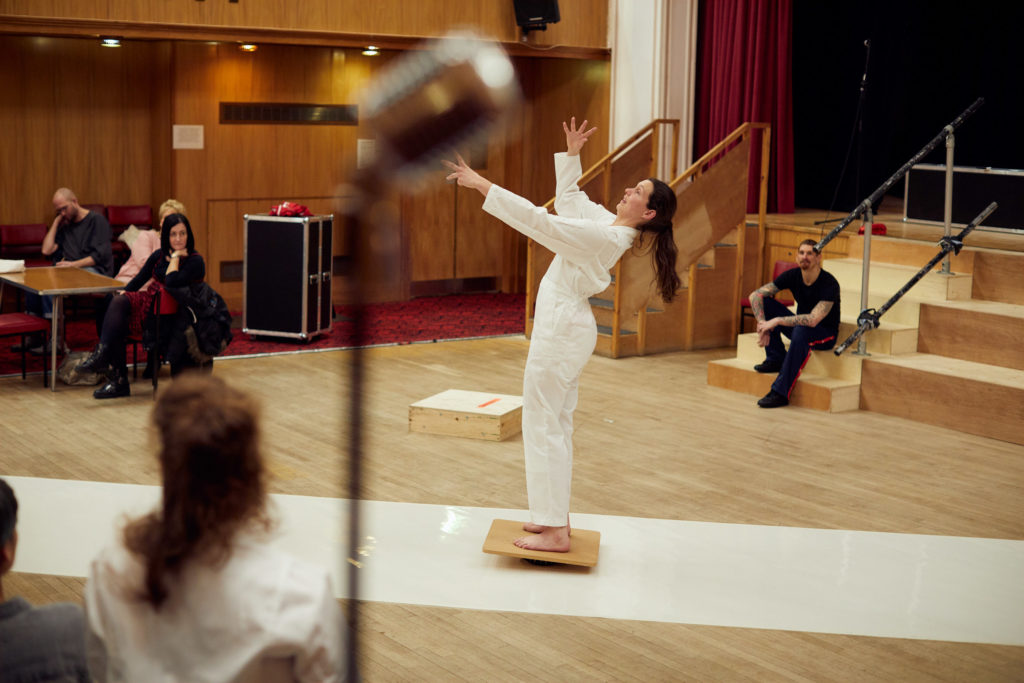 Victoria Malin in rehearsals for Thank You Very Much. Photograph Peter Dibdin

“I began to wonder if a lot of the training that disabled people experience at the hands of medicine – especially in childhood – where they work towards the notion of getting us to conform to a mythological, normative body that none of us could ever have in reality? I’ve heard some quite horrific tales of the physio people went through as kids which wasn’t about helping the individual but more about getting them to move like a normative body.

The horror that someone should crawl; the pressure put upon individuals to be vertical; or forcing someone to try walking when it’s clear using a wheelchair would be more efficient. To make someone eat or drink in a particular way that is more about other people – the audience – rather than about the most efficient way for that individual. Is there an odd parallel between training as a tribute act to mimic someone else and this enforced training for disabled people to conform? The clearest difference is tribute artists are choosing to do this, whereas it is thrust upon disabled people, no matter how much you push back against it. So it’s about agency; it was never our choice.”

Cunningham is a solo performer in an industry dominated by companies. It feels significant that Thank You Very Much sees her work with an ensemble with three other disabled artists including Victoria Malin, Dan Daw and Tanja Erhart. “They’re all artists that I admire and that I’ve wanted to work with for many years,” explains Cunningham. “I specifically cast other artists who identify as disabled, which from the outset was really important to me and it also interested me to cultivate that environment – not only aesthetically – but also to understand what that meant as a working process.”

“Working with a group was partly about the loneliness of making and touring solo work. It’s quite a hard life. With Guide Gods and Give Me a Reason to Live I was touring with groups of people and sometimes had support on stage but for the most part, it’s me as the only performer. Working in a duet with Jess Curtis on The Way You Look (at me) Tonight, reminded me how fun it is to have other people on stage. Plus you don’t have the sole responsibility to carry every moment. There was something about wanting to build a little family.”

Thank You Very Much will be the first time Cunningham has both devised and performed in a group work. Aside from the comradery aspect, the notion of pushing herself and her practice into uncharted territory is central to her way of working.

“The way that I work tends to be from one project into the next. Along with my dramaturg Luke Pell, we look at where I have become comfortable in the last piece and try to push me out of my comfort zone in some way. Before Guide Gods, I’d become comfortable performing to proscenium arch (to one side of the theatre), with audiences out in the dark. So we put audiences on three sides and brought them close because that terrifies me. I’m kind of scared of interacting with audiences so we also included some mild audience interaction. Then trying to learn from that. The Way You Look (at me) Tonight took that even further. Let’s have the audience everywhere. Let’s really engage with people and think about how we do it safely for them and me but in a way that still feels live.” 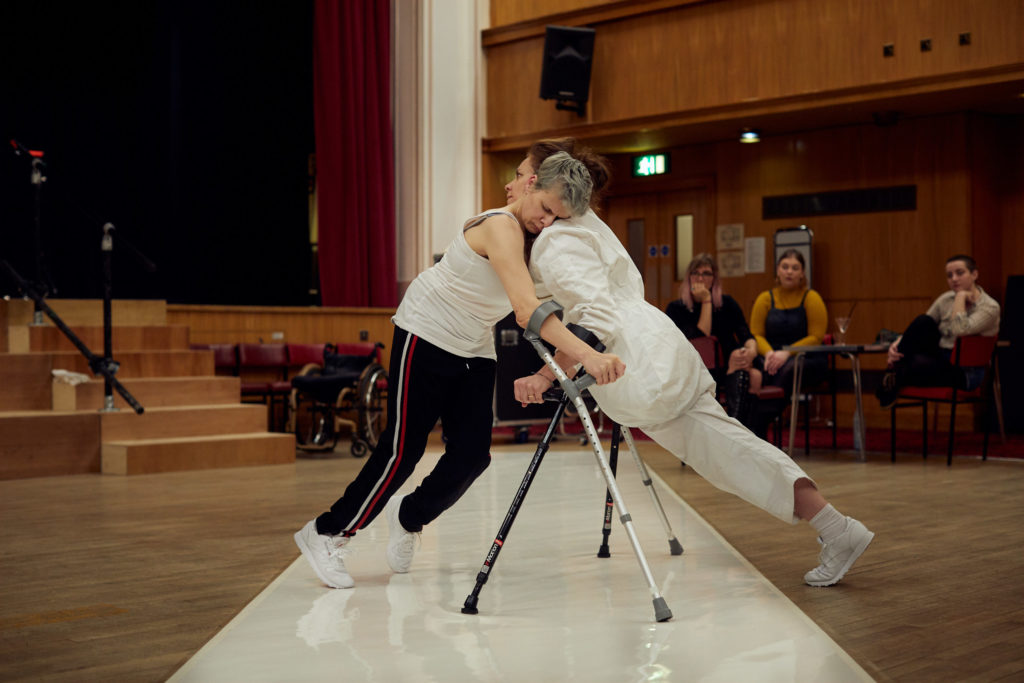 Claire Cunningham and Tanja Erhart in rehearsals for Thank You Very Much. Photograph Peter Dibdin

As well as working with an ensemble, the type of venue is an area where Cunningham is pushing her own boundaries for Thank You Very Much. Partly inspired by that fateful trip to Porthcawl.

“Being there was a wake-up call that I might’ve got myself trapped in this bubble of the black-box theatre, contemporary dance world which is mostly white and middle-class, university educated, non-disabled audiences. This was another area where I’ve become comfortable, so part of the idea of this work was to take it out of those spaces.”

At the Porthcawl Elvis Festival, bars and social clubs are one of the most common venues. They’re also the usual circuit for tribute acts. The practicalities of these places in terms of sufficient space for movement and access aren’t straightforward, “So we’re looking for spaces that have that feeling but might be bigger,” explains Cunningham. For the premiere at Manchester International Festival the Ukranian Cultural Centre fits the bill because It breaks the formality of the black-box theatre world.

Despite a glittering career and international acclaim, the significance of Thank You Very Much being co-commissioned by Manchester International Festival (MIF) is not lost on Cunningham:

“I’ve had an unbelievably fortunate – and I acknowledge, privileged – career in terms of the interest in my work from high-profile venues and institutions. But there’s something about that circuit that MIF sits on and what it means for a disabled artist to have a presence there. I hope it is the first step for something beginning to filter through and beginning to come onto the radar of these bigger festivals that haven’t been interested historically.”

And regardless of all of her success, Cunningham is disarmingly modest and, when we spoke, genuinely trepidatious. “I might be one of the first disabled artists they have commissioned. So, it feels like there’s a big responsibility. Try not to fuck it up Claire!”

Given her critical approach, rigorous process and highly talented team of collaborators, I for one am sure Thank You Very Much will be more than a fitting tribute.

Thank You Very Much is at the Ukranian Cultural Centre, Manchester 17-20 July and at the Couper Institute, Glasgow 31 October – 3 November.

Find out more about Claire Cunningham on her website. 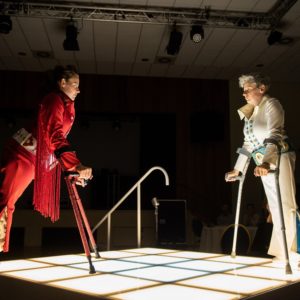 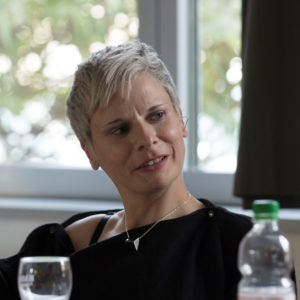