Inclusive dance-theatre company BLINK use dance, live music and storytelling taking their audiences inside the lives of four strangers. Review by Kate Lovell A bold, primary-coloured set design showcases four performers, each with a colour distinct to their character, poised in four corners as the audience enter. The image instantly conjures memories of a childhood board game, Ludo. Sure enough, this metaphor fits well. The show is lively and playful. It also explores the ways in which chance can significantly impact on our day-to-day lives, for better and for worse.

Each character goes on a journey, some ordinary, some potentially life-changing, all expressed through dance, dialogue and music. The use of live music and sound effects is delightfully witty, with the show’s musician leaping up to become a busker on business tycoon Majekodunmi’s commute to work, before returning to the mic to make Tube announcements.

Four Corners is at its most engaging when experimenting with the possibilities that live performance work affords and in its pure dance sequences. Sometimes the dialogue is superfluous or slows the pace, however. The stories are most exciting when told through the body as all performers are mesmerising when working physically. The stories performed by Majekodunmi and Hawkins were particularly compelling. Hawkins’ character is a teen, finding out about who she is through experimenting with membership of a religious cult. Majekodunmi is a City boy, who finds himself racially profiled and accused of a crime he did not commit. The show achieves a rare found balance of exploring meaty themes whilst maintaining joyfulness and dynamism. Majekodumni’s caricatured portrayal of a skiving Canary Wharf wideboy is great fun to watch. He is caught performing a dance routine outside his glass-walled office, playing truant from a business meeting.

But, his story takes a dark turn. Majekodunmi being interrogated in a police cell, not given the opportunity express himself fully with an unforgiving interviewer is stark and impactful. It raises numerous issues, not least about the barriers that learning disabled people face when interacting with bureaucratic regimes and our justice system.

Watching this character struggling to respond to quick-fire questions is a sharp contrast to the skill and control displayed in his dance routines. It’s a reminder that people are as capable as the environment allows them to be; the social model expressed through dance. The stories performed by Weekes and Gill are very much more light-hearted in tone, which provides important balance in the piece. It does, perhaps, mean that there is less opportunity for these performers to find a necessary depth to their characters. A beautifully choreographed sequence of Weekes’ morning routine and his solo-sung performance at the show’s end are both highlights, with room for the audience to see more of this story in between.

The striking thing about Four Corners is the equality on stage between both disabled and non-disabled performers. It is evident in the performance itself that the process is democratic, giving equal weight to all four artistic directors who both choreograph and perform this piece.

Witnessing the nuance of sensitivity and responsiveness of each performer to one another is as exciting and engaging as the liveliest hip-hop routines. BLINK are a company to watch with a wealth of talent held within those four corners.

Four Corners is on a national tour throughout July, with the following dates 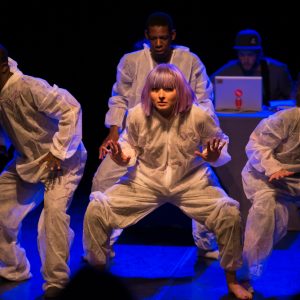 BLINK Dance Theatre’s FOUR CORNERS is a production which weaves together dance, original live music and storytelling, to tell the tale of four strangers. It originally played in June 2016 to sell-out audiences, but returns this June and July for a national tour. Kate Lovell speaks to Francis Majekodunmi, co-director of BLINK Dance Theatre ahead ...