Alison Wilde takes a glance across two decades of Coronation Street in an analysis of the ITV soap’s representation of Disability, highlighting characters whose storylines portray an understanding of the social model of disability. 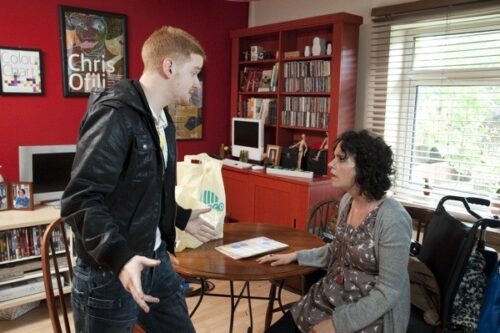 I am a long-time fan of Corrie, despite some occasional despair at over-extended storylines that sometimes stretched the credulity as well as patience of the audience (e.g. the Phelan killing spree of 2017). As a northerner, a soap opera scholar (my PhD in Disability Studies) and a fan of comedy, they don’t come much better than Coronation Street for pantomime moments (apart from Victoria Wood’s Acorn Antiques, perhaps); these are what make it the best contemporary soap for me. As I now have to limit my soap opera diet, taking the temperature of representational change in soap opera portrayals is entirely reliant on Corrie.

Recent Corrie stories made have me realise how far we have travelled from the pathological forms of imagery which dominated in the 1990s, e.g. the oedipal trajectories of Don Brennan and Jim McDonald, and the portrayal of disabled women as burdens on the rare occasions they appeared (e.g. Maud Grimes).

Coronation Street now demonstrates more awareness of disabling barriers, and has shown considerable commitment in employing disabled actors recently, with two regular disabled actors (below), and two recent irregular characters, Emily Bishop’s niece Freda (played by Ali Briggs), and Imogen (played by Melissa Johns).  It feels like we are really getting somewhere when we can even see incidental characters featured, e.g. a Deaf couple using sign language as they dined in the Bistro, in May 2018. We may soon look forward to a third regular character, with one of Gemma and Chesney’s quadruplets (Aled) born deaf in 2020. 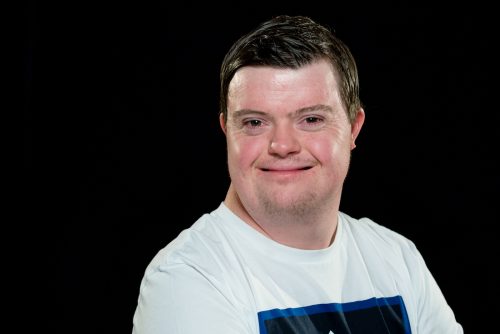 Sadly, there has been a noticeable absence, or only scant appearances, of the two regular disabled adult actors during the pandemic, Izzy Armstrong (played by Cherylee Houston), and Alex Warner (played by Liam Bairstow).  Well before 2020, both characters were welcome additions to the soap, ushering in new types of disability representation.

Cherylee Houston was the first disabled actress on Corrie, as Izzy Armstrong, and one of the first disabled actresses in a UK soap. I am assuming these absences may be due to the pandemic; although she’s not mentioned as a character who is shielding there have been efforts to include other actors who have to shield, i.e. showing them on online calls. Izzy is occasionally mentioned in people’s conversations but has not made recent appearances, an absence which could have been utilised to bring viewers attention to the extraordinary weight of issues disabled people have faced during the pandemic, e.g. the fact that many disabled people have not been able to leave their homes for ten months.

It would be easy, now, to forget how radical it was to employ a disabled actor on television in 2010, with only very few representations of disabled women, or characters, on British television before 2008 (for example, Lisa Hammond and Cerrie Burnell on Grange Hill).

Thankfully, Izzy has largely avoided the kind of stereotyping we saw with Maud Grimes, even providing one of the earliest representations of successful disabled and interdependent parenthood. Similarly, in 2015 Liam Bairstow was the first actor with Down Syndrome (DS) to appear on Corrie and his storylines have steered well away from the usual tropes afforded to people with DS, refusing stories of infantalisation and stigma, instead emphasising agency, whilst remaining honest about barriers and needs.

Despite the relative absence of Izzy and Alex during the pandemic, there have been many impairment-related storylines throughout the last year, many pre-dating this period. I even began to question whether there are too many impairment-related storylines on the street, when it became very noticeable that two different characters were admitted to hospital in the same week as part of two different storylines.

One of these was the story of Oliver, Leanne Battersby and Steve McDonald’s son, who was three years old when he was diagnosed with mitochondrial disease; his eventual hospitalisation and worsening condition resulted in a court case when the hospital decided to withdraw his treatment. With Oliver constantly unconscious or sedated, the focus was on the agonising experiences of his parents and family; as well-acted as this was, this heart-rending story of life and death decision-making is typical of issue-based soap drama (and, sadly, a potential candidate for soap awards).

However, the development I think breaks new ground is the story around the character of Shona Platt. She is not the first person to have an accident which results in brain injury (in 2020) but the trajectory of her rehabilitation makes many departures from the storylines of the past. Not only do we have her devoted, if troubled, husband David showing a deep commitment to her, but the potential rejection of her old life (as unwanted) comes from her, and leads to a situation where he declares his greater love for her (disabled) self; a bit schmaltzy perhaps, but it probably spoke volumes to many of us with acquired impairments.

We were also given insights into some of the difficulties that brain injury might bring in her reintegration into family life, alongside gentle and respectful comedy incidents which have largely been built on the lack of communication filters resulting from her injury. These have been used to good effect to question what passes as normality in social situations, a facet of disability representation I have rarely seen outside Disability Arts. Although I am not a big fan of slushy moments, the scenes of David’s re-enactment of their wedding to aid her memory, and his declaration that he was more in love with the ‘new’ Shona  were delightful, taking a progressive step in disability representations, where the new disabled person asserts their right to be loved as they are, not for who they were.

There have been several disabled narratives in the last few years, some featuring children. In 2018 Jack Webster had his foot amputated after he was diagnosed with sepsis (due to a sporting injury); Jack is played by a non-disabled actor Kyran Bowes, who had worked on the soap since 2016.

Max Turner (played by Harry McDermott,) the adopted son of David Platt, was diagnosed with ADHD in 2014, aged eight. Other recent additions include the later diagnosis of Multiple Sclerosis (LOMS) for Johnny Connor, also in 2018, at the age of 64. Disability-wise, I am glad to have seen that this depiction has avoided common associations of MS with sour personalities and the positioning of an MS diagnosis as a tragedy; it is neither ignored nor central to Johnny’s life. As good as this is, if I am being picky, I wish they’d go a few steps further and confront issues such as the bladder and bowel difficulties (very common for people with MS), and could easily fit well within both dramatic and comedic elements of the show.

Overall, although the majority of impairment and disability storylines have been played by non-disabled actors, it is worth noting that another character who has an impairment which matches with his own is Steve McDonald (Simon Gregson);  the character was diagnosed with clinical depression in 2015, close to experiences Simon Gregson has in his own life.

Much progress has been made, I think, but there are some caveats. First, all the characters I have discussed so far are white. We rarely see Black disabled characters in film and television, and, given the large amount of people with impairments currently on the street, this absence is becoming noticeable – notwithstanding the newish character of Grace Vickers (played by Kate Spencer), former girlfriend of Michael Bailey. It is implied that her mental health problems are linked to the loss of a baby, but the storylines so far have encouraged us to take a side between characters, dependent in part on our fondness for the Bailey family, and our position on  the old ’mad’ or ‘bad’ binary. Whilst the same could be said to be true of several white people on the street, including the current difficulties Peter Barlow is having with alcoholism, this is the second time we have had a Black mixed-race woman with mental health problems set against ‘good families, i.e. Kirsty Dobbs as an abusive partner (played by Natalie Gumede) in 2013.

Nonetheless, this is offset, to an extent, to the casting of Alexandra Mardell as Emma Brooker, an immensely likeable empathetic character, and daughter of Fiona Middleton (Angela Griffin), another well-liked character from the early 1990s. Nonetheless, in terms of equity it would perhaps be prudent for the producers of the show to think a little more specifically about the intersectionality of impairment and ethnicity portrayals.

In contrast to the high number of white people with impairments there are now several other long-running characters who are either Black or people of colour such as Yasmeen (Shelley King), Dev (Jimmi Harkishin), Imran (Charlie de Melo) and Alya (Sair Khan), as well as the Bailey family all of whom are non-disabled characters. Given this disparity and the dearth of Black disabled women on our screens, it would seem wise to start employing disabled Black actresses and to strenuously avoid endowing them with angry/deviant mental health-related impairments for the foreseeable future, especially if we are to avoid the re-creation of old tropes of angry/hysterical Black women as the deviation from ‘the norm’.

Second, I was quite dismayed when I saw a recent storyline featuring Maureen Lipman as Evelyn Plummer. It may seem picky but some of the most insidious disabling portrayals can often be found in the fine detail, without a disabled character being present. Evelyn was put into a potentially romantic situation with a character named Arthur where the eventual drama is caused by the existence of Arthur’s unmentioned and unseen wife who is very ill.

I have seen too many repeats of this storyline in films over the last few years, where we are invariably encouraged to empathise with the husband who is cheating on his wife, by pitying his ‘burden of care’ and understanding his need for affection. Although this would be an entirely different tale if these people were in polyamorous relationships (none of them were), I always find them chilling in the blatant disregard for the value of the life of the disabled ‘other’, especially as the happy ending is only made possible by the spousal death (e.g. the 2020 film 23 walks). Arthur’s wife has now died, and he has gone to Canada; I hope there is no reunion.

Well, that’s my two-penneth, as Evelyn might say. All in all, I think Corrie has achieved much over the last twenty years, especially in the last ten, but inclusion is always a work in progress where we learn from our mistakes and strengths. I don’t know how I’d have got through the pandemic, so far, without Coronation Street, but a commitment to inclusion means that there is always room for improvement. 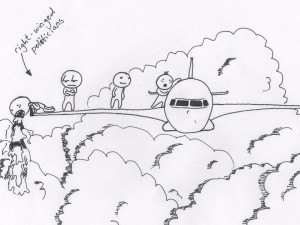 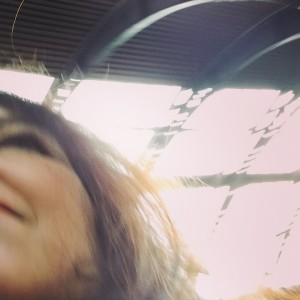 Considering the number of people in the UK, with disabilities and health problems, I would say we are very underexposed. In fact, I have had an E-mail from the BBC, saying that if I contacted them again about the same subject. My name would be put on a blacklist, and they would prevent my E-mails being read. I contacted them, because, I was unhappy they very rarely showed holiday programmes for disabled people, that’s all.