Edited by Eva Egermann, Crip Magazine draws from the history of the disability rights movement and creates a visual culture of crip subjects with 80% of its contributors identifying as disabled artists. 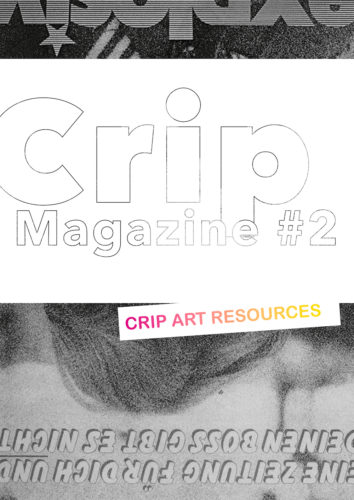 With kind permission of the editor, DAO publishes the english version of a featured article taken from the second issue of Crip Magazine, published in May 2017, ahead of the Crip Convention in Vienna on 19th and 20th September 2019 where a workshop on the continuation of the magazine project will be held,

‘An Archive of Pain’ by Alyson Patsavas

These types of questions dominate discussions of pain to such a degree that they leave little space for those in pain to direct conversations (about their own pain or otherwise). But these questions also place those in pain in the position of having to account for their pain. This often translates into accounting for what we have done to eliminate said pain. These questions, of course, are deeply rooted in the dominance of a medicalizing gaze, a gaze that has long extended beyond the borders of doctor’s offices and therapy centers. These questions, then, carry the diagnostic gaze from the physicians and therapists to everyday exchanges. They manifest in everyday encounters, everyday movements.

I cannot count the number of times that I have been asked by distant relatives, bank tellers, gas station attendants, or strangers on the street: “What is wrong with you?”; “What happened?”; “How did you hurt yourself?” Perhaps if I could number such exchanges, then they would count – in the sense of evidencing the harm, weight, and violence of such questions.

Questions that demand I account for “what’s wrong” reflect the degree to which people assume that they have a right to know what is happening with others’ body-minds. This “right to knowledge” reflects a broader cultural and discursive demand for disabled people to account for themselves, account for their presence, the space (and resources) that they take up, and the efforts, energies, resources that they personally invest in their own recovery.

At their worst, these questions – and the answers that they compel – fuel the brand of ableism that uses the presence of pain to justify the dismissal and devaluation of disabled life. As such, can we think of the refusal to answer as a political act? By refusing to talk about where it hurts, how it hurts, or what “major life activities” pain interferes with, do we frustrate the right to know or just cede the narrative to those who ask… all too willing to fill in with the available narrative scripts?

What would it mean to consider the ways that inciting new forms of knowledge about pain actually requires a refusal to ask or answer questions that have come to shape and limit dominant forms of knowledge? How might we shift meaning? How might we reframe the question of “where does it hurt?” “What do you feel?”, “What do you do for the pain?”, or “What’s wrong with you?” – what might it mean to take these questions and turn them outward, to shift the object of the inquiry?

Using a queer, crip analytic – a sensibility and critical practice that takes the playful, radical critique of hetero/ homo-normativity and combines it with the ragged, unflinching focus on challenging and remaking structures of ableism – I began to imagine An Archive of Pain. The full archive includes sections of old journal entries (kept since the accident that initiated my experiences with chronic pain), journal entries kept as a conscious part of my research process, and photos, taken in moments of pain flair-ups or crisis, as I more generally call them. Included here is a selection of the photo archive, with textual descriptions of the visual images. 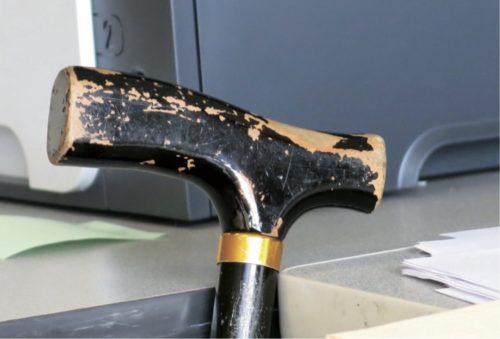 How Does it Feel? An Archive, a Cane
Image taken in my office, in the late afternoon. The image shows a black cane with a wooden handle leaning up against the corner where two desks meet. The handle of the cane is large and central in the image, revealing the wear pattern that exposes the wood. The handle is scratched and the edges chipped from falling too many times on the ground. A copper ring connects the wooden portion of the cane to the metal portion below. Papers sit on either side of the cane on the desks. In the background the bottom portion of a printer appears. 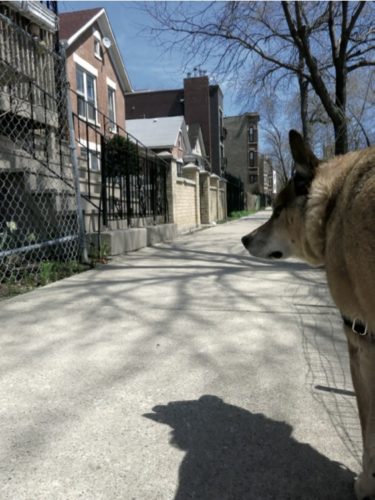 When Does it Hurt? The Everyday
Picture of street on a sunny day. A medium-sized dog (part Shepherd, part Pit Bull) in the right hand corner, his shadow falling on the pavement. The sky is blue, the bare trees cast a shadow on the pavement and the left side of the picture reveals a row of two and three flat houses with a variety of different types of fences (steel, wrought iron, brick, and wood). The dog looks toward the steel fence in the foreground. 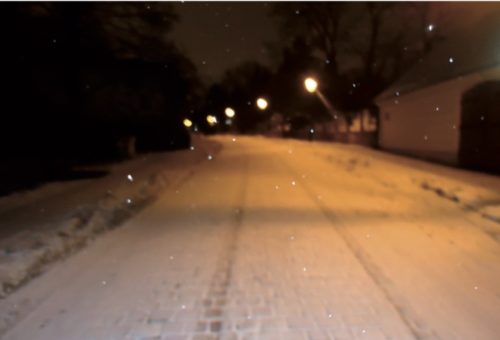 When Does it Hurt? Long Walk, Perfect Night
Slightly out of focus cobblestone walkway, covered in a light dusting of snow. Five out of focus lights disappear into the background. The foreground of the picture reveals speckles of snow. Two tire tracks on the cobblestone start in the foreground and disappear as they move toward the five (street) lights in the background of the photo. 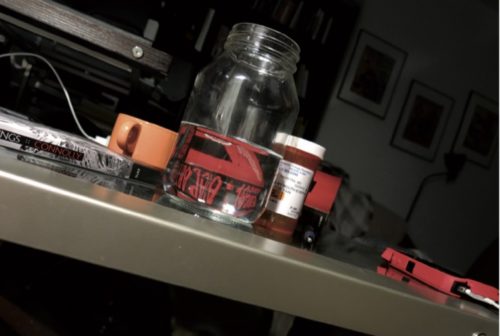 When Does it Hurt? Falling Asleep, Staying Awake
Titled picture of desk. On the desk is a mason jar, half filled with water, an orange coffee cup, an empty bottle of pills, a pen, a phone with a red and black case, and two books. Both titles are obscured. The one in the far left of the frame is written by Connolly (The Fragility of Things) and the one behind the water glass has a red and black cover (Washington’s Medical Apartheid). Out of focus in the background on the left is a bookshelf and two pictures hanging on a wall above a chair (with blankets on it) and a floor lamp in the background on the right. 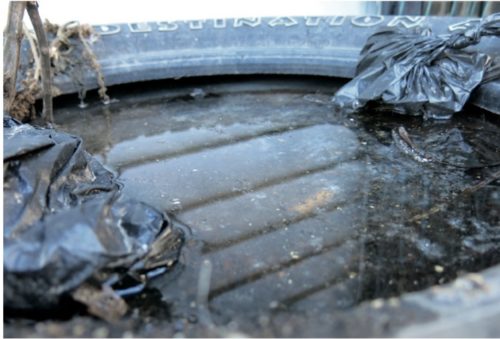 How Does it Feel? Like Shit, In a Bag, Frozen Over
Close-up shot of an old tire, turned into a planter. The word DESTINATION is visible across the top of the tire. Inside is filled with water, frozen over. A dead branch from a plant sticks out of the ice in the top left-hand corner. Two bags hang over the tire, one in the top right of the picture, one in the bottom left. They are both partially frozen into the water. A single cigarette butt is visible (out of focus) mixed in with the sticks and mud underneath the ice. The siding from the side of the house reflects in the ice as well. 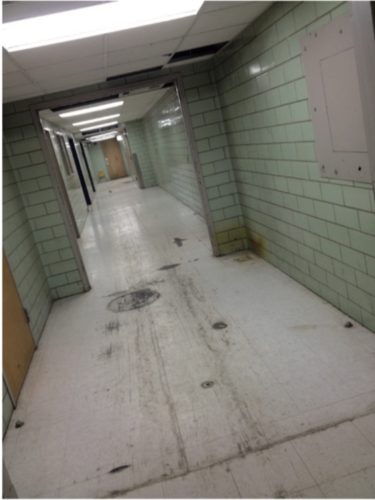 What’s Wrong with You? Walking with/ in the Institutional Legacy
Image of a long hallway, frame slightly obscured (tilted to the left). The walls are tiled in a sea foam green. The image shows a door- way leading to another section of the hallway. The doors have been removed. A rust stain remains on the tile by the door frame. Dark lines of wear patterns run down the hall, marking the tracks of gurney and cart paths. An orange chair, small in the top corner of the picture sits at the end of the hallway next to a wood door. 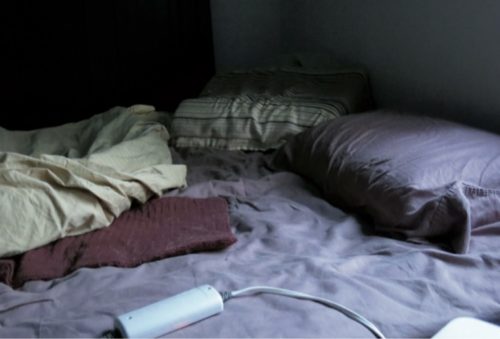 Where Does it Hurt? Comfort, Home, Survival
Image of an empty bed. The sheets are light purple color and the comforter, a beige color, is pulled back as if it was just thrownback. Laying on the bed is a maroon red colored heating pad. The cord to the heating pad snakes around the length of the bed and drops of the frame. The white controller panel on the heating pad is facing upside down, but faintly against the bedsheets a slight orange light shows. The light comes in from the window that is just out of view of the image. 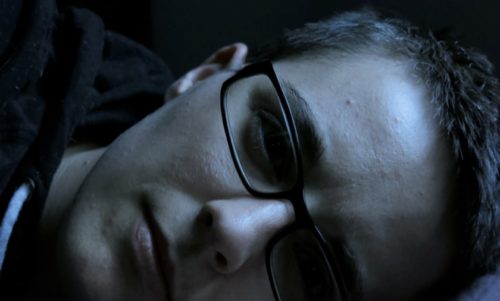 How Do You Feel? Just Fine
Close up image of a white person’s head lying sideways, just over 3/4 of her face visible. She wears black-rimmed glasses and has short cropped brown and grey hair. Shadows cover her eyes from being fully visible. Her mouth is closed and she stares at the camera. The light fall revealing the lines and pimples on her face, nose, and chin. She wears a black shirt with a white string visible, hanging down. Her face ap- pears resting, but not fully relaxed.

Alyson Patsavas is lecturer at the department of Disability and Human Development at the University of Illinois at Chicago (UIC). Her research focuses on the cultural politics of pain, the cultural politics of health and illness, the intersections of queer theory and disability studies, as well as representations of disability in film, television, and popular culture. She is a co-writer and co-producer on the forthcoming documentary ‘Code of the Freaks’.

The Crip Convention in Vienna on 19 and 20 September 2019, will gather artists, authors, scientists, and cultural producers whose work deals with norm-critical issues. In addition to public readings and performances on the first evening of the convention, the workshop on the following day will explore ways to continue running the Crip Magazine together as a collective artistic platform.

During Wienwoche, an exhibition will display a selection of art works as well as previous editions of the Crip Magazine project. The redesigned barrier-free rooms of the queer community café Villa Vida Café of the Türkis Rosa Lila Villa will be the meeting place for various groups and initiatives such as Mad and Dis_ability
Mad Pride Vienna or the DISTA (Disability Studies Austria) network.

The goal of the Crip Convention Vienna is to advance the networking of the queer and disability/crip art and cultural scene in Vienna. MAD LOVE!

Event language is German. The programme on Thursday Sept 19th will be translated to Sign Language.

On request, there will be child care during the event on Friday Sept 20th. Please let us know if you want to make use of our available child care services via reservation@wienwoche.org until Sept. 17th 2019 and please state the child(ren)’s age.

For more information go to the Crip Convention Facebook page 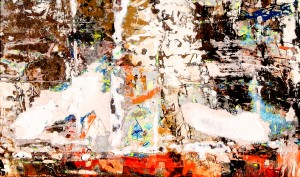 Great stuff. As someone who suffers with Chronic pain, and as an artist I really appreciated this article and it’s imagery.