Dave Lupton aka Crippen has initiated the CRIP Tributes 2021 – a series commemorating the achievements of disabled people. This month Dennis Queen nominated Sue Elsegood for acknowledgement. Those of us who know Sue, either through her activism or on a more personal basis, recognise the understated role she has played in our fight for equality. 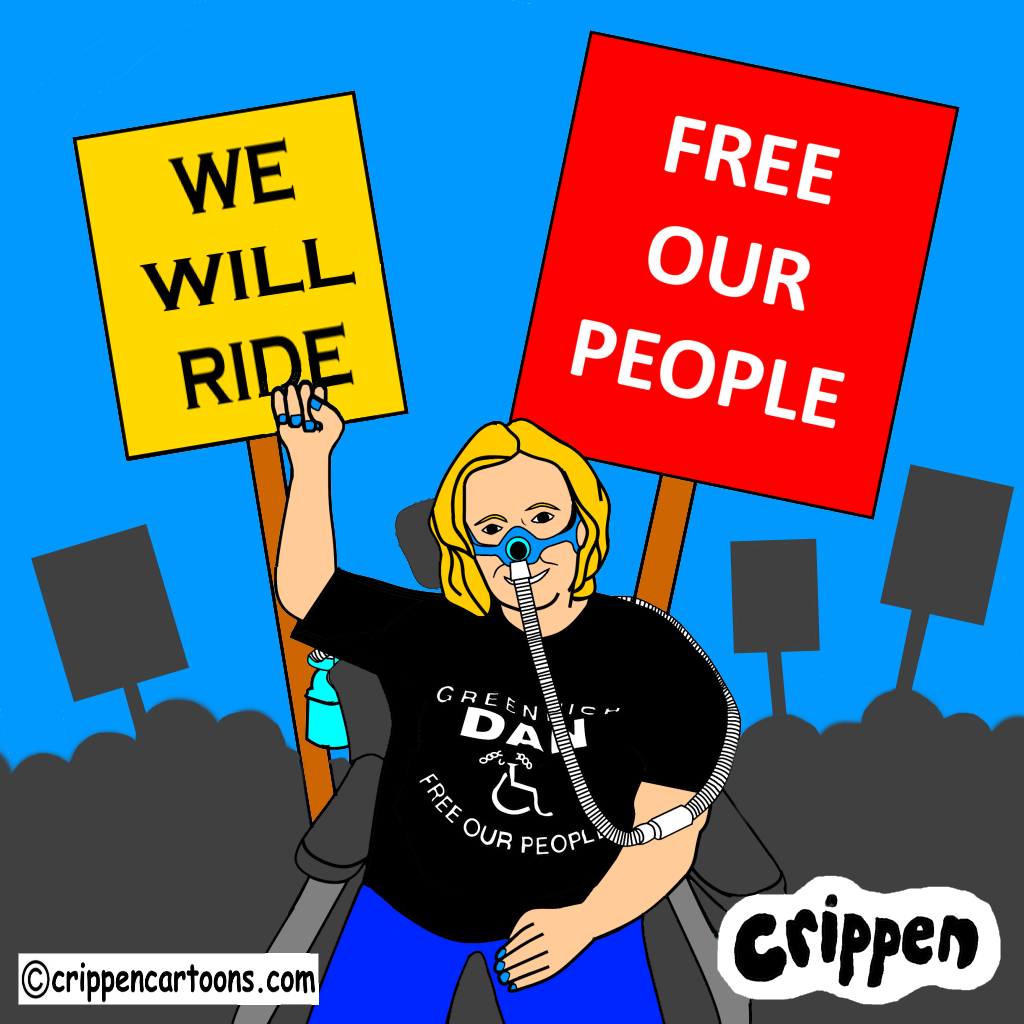 Sue’s friend and colleague Dennis Queen has known Sue for over 20 years, during which time she has participated with her in various actions, mainly organised by the Disabled People’s Direct Action Network (DAN).

Dennis tells us: “Sue appears at first meeting to be a quiet gentle soul, dignified and serene. Her acts of kindness and the help she has offered through a peer support role, encouraging self-advocacy and independence to those disabled people disempowered by those institutions who claim to represent us, are legendary.

“But behind this gentle image, there is a fighter as tough as nails. Sue was one of the original group that formed the Campaign for Accessible Transport (CAT). Taking part in blocking the routes of the inaccessible London bus’, she was once arrested with eight other disabled protesters and charged with obstructing the Queen’s highway. The protesters were all later released without charge.

“She has dedicated most of her life to fighting for our rights, blocking roads, occupying buildings, and protesting about the degrading Telethon debacle in the early 1990’s. Sue was also part of the small International team that produced ‘Thrive Aid – The Art of Protest, that myself and other disabled artists performed in on the International Day of Disabled People 2020.

Sue is bold and solid: brave like a warrior, unmovable. She has put her life on the line for our emancipation many times and is behind many an ‘escape’ by disabled people from unsuitable residential establishments.

“Sue was also amongst the first disabled activists to be arrested at a demo organised by DAN. She appears in the BBC documentary ‘Desperate DAN’, and was shown being released from police cells, again without charge. We’ve also participated together in many actions and occupations together since then, along with fellow activists from DAN, Disabled People Against Cuts (DPAC) and the Not Dead Yet! (NDY) campaign.

“As a member of the Greenwich Association of Disabled people (GAD) since 1989 – now called METRO GAD as they merged with METRO in 2019 – Sue has been involved in many of their empowerment projects aimed at working with local disabled people. She is currently Co-Chair of METRO GAD.

“It is with great pleasure that I nominate Sue Elsegood for a CRIP tribute in recognition of her continuing fight against an inaccessible society. I am proud to call her my friend.”

To nominate a disabled person for a Crip Tribute please email colin[at]disabilityarts.online with details of who you would like to be recognised and why.

Thank you so much Dennis, Dave and Colin! You are the real stars!!

a very well deserved tribute having seen Sue in action outside DWP Head Office I know just how obstructive she can be. Next year Shaw Trust 100 maybe???? (just joking obviously)

Loads of positive comments and messages after we posted this well deserved Tribute in facebook. You’ve got a big fan base out there Sue … ever thought of standing against Boris?! 😀 xx