DaDaFest 2016 hosted a two-day Congress at the Museum of Liverpool 1-2 December. Designed as a set of provocations to explore the impact of disability and d/Deaf arts within the context of growing media exposure and responsiveness to the work within the mainstream, 40 years on. Colin Hambrook reflects on some of the conversation and the dilemmas presented by the will to become part of popular culture. There are so many reasons why the DaDaFest Congress is important to the disability community. Firstly, it is one of the all-too-rare opportunities in the calendar (and even then it is only biennial) for Deaf and disabled artists; individuals and allies to get together in a safe space and have a conversation about what disability arts − for good and for bad − means to us as a community.

The DaDaFest Congress, designed as a set of provocations and conversations to explore the contexts and impacts on how disability and d/Deaf arts practices are being delivered was headed with a nod to Shakespeare: “All the World’s Stage… but not if you can’t get on it!”

A major theme running through the conversations from the keynotes, question-and-answer sessions and breakout groups, was around the tension and conflict between disability arts and the mainstream. Kaite O’Reilly chairing the first day of the Congress set the tone by asking to consider whether we felt the disability perspective still held importance and whether when we talked about diversity we meant diversity in body and mind.

She reminded us of the debate at Tate Modern produced by London Disability Arts Forum and chaired by Melvyn Bragg back in early 2008: ‘Should disability and Deaf art be dead and buried in the 21st Century?’ The vote was pretty much a unanimous “no” yet even so, by the end of the year LDAF had lost their funding and had closed, alongside a plethora of disability arts fora across the UK.

O’Reilly reminded us that disability arts at its most experimental, radical, or unorthodox is a challenge to normalcy and as such is the last of the avant-garde movements of the 20th century.  University of Bremen Professor Peter Burger and author of The Theory of the Avant-Garde says avant-gardism rejects the “institution of art” and challenges social and artistic values, and so necessarily involves political, social, and cultural factors. In its attempts to change the language of the arts, to find different ways of doing things that revolutionise access and continue to use the arts to fight for social justice, disability arts fits the bill. As O’Reilly put it: “the atypical body is not neutral, but is a signifier” − we become a foil for all kinds of interpretations of what it is to be human. Often tragic but brave, ugly and a nuisance and sometimes evil and dangerous, we are the unintended performers infesting the mainstream world with our presence.

For many of us, understandably the priority is to be accepted, included and to have the means of access made available to us. We don’t necessarily want to change the world or to challenge anything. In the face of punitive austerity cuts and the stripping back of any social agenda in the new age of intolerance we’ve entered in the last year, it’s perhaps no wonder that we’re frightened and desperate to fit in.

The motion for debate at the end of day two of the congress that “Disability Arts should gain more recognition as a diverse and distinct sector in its own right” was carried, but not with anything like as high a margin as I certainly, would have hoped for, considering the number of disabled leaders in attendance.

Keynote speaker Heidi Thomas, writer, creator and executive producer of BBC’s Call The Midwife asserted that ‘life is mainstream’. A key motivation for her, as a non-disabled person who grew up exposed to the brutality of the disableist attitudes her disabled brother encountered, was a determination to reflect society in her work. Her TV drama, which goes out to millions has featured many disabled characters played by Deaf and disabled actors like Colin Young, Genevieve Barr and Sarah Gordy.

Thomas made a strong invitation to disabled writers to pitch to write for the show, set as it is in the late 1950s when the welfare state was fired by idealism and society was making a shift to resolve issues of exclusion as the remainder of the generation who’d grown up under rigid Victorian classist hierarchies entered old age. Claire Cunningham’s point that it always takes the mainstream at least 20 years to catch up with leading arts movements like disability arts is perhaps reflected inversely by the historical setting of Call the Midwife. Cunningham talked passionately about how DaDaFest 2008, when she was commissioned to perform for the first time, changed her life as a performer, opening up creative possibilities.

At the time, she was aware that the audience was largely made up of disabled people and disabled artists but wasn’t interested in being part of a disability community. Like many artists her journey to embracing disability arts happened over a period of time.

New to the social model and new to the language of disability arts, she responded negatively to descriptive terms like ‘crip-culture’. She was clear that she didn’t want to make work that reinforced ableist attitudes, but equally felt that making work with the political intention of challenging attitudes would fail.

Her priority was to be ‘normal’ rather than be a disabled artist until she realised that ableism taught her to love bubblegum-pop trio Bros – and for that, if for nothing else, the constraints of popular culture deserves to be eradicated. But joking aside, the discomfort younger disabled people face at embracing crip-culture is harder to bear in this time when a dramatic change in the political climate is influencing the way society is thinking.

Even with the presence of Young DaDa at the congress, the sparsity of younger panellists and younger audience was palpable. John McGrath, Artistic Director of Manchester International Festival made the all-important suggestion that in bringing younger disabled people on board we must listen first and not go in thinking we have to educate. Cunningham described how Garry Robson had taken that approach in encouraging her at that DaDaFest eight years ago.

In her keynote, Jenny Sealey added some optimism in talking about the feistiness of her ‘astro-elves’ − a group of young disabled children Graeae are working with. But equally she talked about how ‘cripping-up’ and inaccessibility within theatre and film go largely unchallenged.

McGrath pointed to the influence disability arts has on the mainstream, teaching collaborative skills and an unprecedented level of consideration in understanding individuals’ access needs. And as the aesthetics of access are interrogated more, so the impact of disability arts becomes more apparent. His intent is to ensure the Manchester International Festival is owned by the full diversity of the city. One of the breakout roundtable sessions. Photograph: Mark Loudon

However, the attempt to appropriate the mainstream can further water down the voices of disabled artists. We become assimilated into it and our voices nullified as the power for us to tell our narratives becomes transferred to non-disabled gatekeepers.

It will be interesting to see how Ramps on the Moon – the collaborative network of seven National portfolio organisation theatres to produce a touring program – pans out over the next six years. This year’s production of Gogol’s The Government Inspector was a resounding success. The plan to revive The Who’s rock opera Tommy next year is more of a risky venture considering the disabling aspects of Ken Russell’s storyline. And will they find a deaf-blind actor for the lead in order to keep the story authentic?

From the floor Robin Surgeoner pointed out that the disabled voice is coming through less and less as the will to kowtow to the mainstream grows. He said something along the lines of: “When the mainstream get hold of us, disability art loses those individual artists and they lose the strength of any conviction to use their art to fight for a full and equal world.”

Surgeoner’s words of warning about being drawn in by the mainstream were backed up by Sealey telling the story of deaf performers working in the mainstream who thought they had to be more like hearing people in order to get the work.

Disability Arts has a role to play, lifting the veil on the reality of disabled people’s lives. Without disability arts, there is no ground from which to point a spotlight on to disability rights and the struggle to survive with the punishment enacted on our community by austerity measures and the dismantling of the welfare state. Equally, it’s clear that something has to change. We’re 40 years on, as a movement, yet still we struggle to attract artists from outside the bubble of white, and largely middle-class communities. We are, as ever, in danger of talking only to ourselves, within a small, self-serving clique unless we make attempts to make stronger connections at a grassroots level. Mike Layward and Colin Hambrook in conversation about The Incorrigibles

Perhaps the saving grace of the congress was Julie McNamara (alternatively known as McNaMayhem) who gave an impassioned speech on choosing life, reaching out, making links and challenging collusion with oppression, whilst admonishing us to “love” from the words of Toni Morrison: “In this here place, we flesh; flesh that weeps, laughs; flesh that dances on bare feet in grass. Love it. Love it hard.”

We can but carry on, with thanks to DaDaFest for all their love and care and attention in hosting DaDaFest 2016 and giving us an opportunity to come together in solidarity.

In conclusion, I can only hope that whatever the upcoming generation determine, that they will continue to be incorrigible, impervious to constraints or punishment; willful, unruly and uncontrollable. Mike Layward told us that DASH Arts named their table-top history of disability arts The Incorrigibles because “it sounds like the name of an art movement, like The Surrealists or The Dadaists.” I don’t know if it will take off, but I like it. Long live The Incorrigibles! 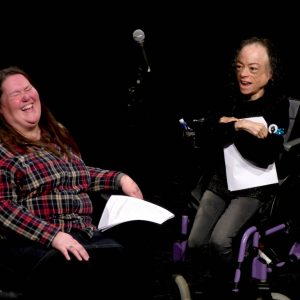 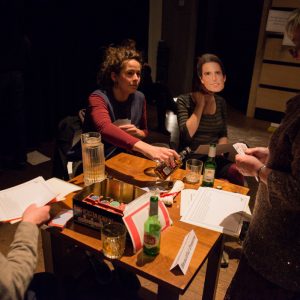