Artist gobscure takes us on a meandering journey through their recent exploits in composition and sound art (‘mad sound,’ as they call it), sending up the notions of the art ‘canon’ and suggesting an alternative via the concept of ‘bandwidth’ along the way. gobscure writes in colloquial parlance, eschewing the hierarchy of capital letters. We have chosen to keep their writing in its intended style. 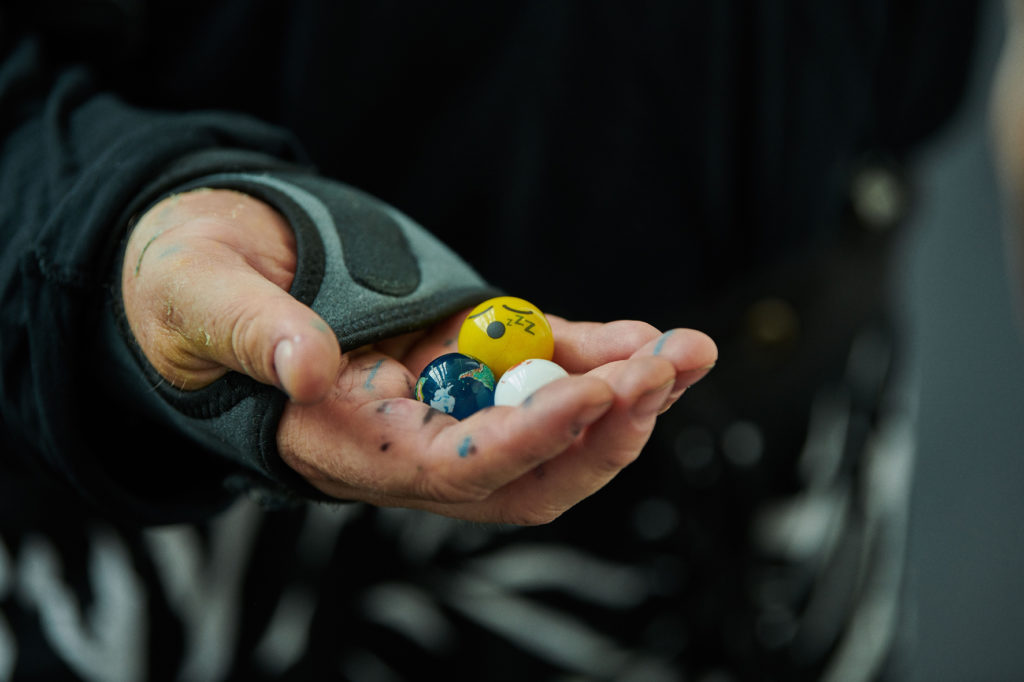 alexander (‘al’) boris de pfeffel spaffer-johnson recites rudyard kipling in a temple in myanmar.   he did this 2 years ago as foreign secretary, the only other talk in myanmar at that time wz ‘is this genocide – yet?’.  this sums up everything about what arts call ‘canon’.  canon is hierarchy.  canon is power.  canons a pyramid inviting us to scrabble /  gouge / kick / spit or hiss others out the way so the borises climb higher.  canon wz deliberately, knowingly, maliciously set up only to ‘prove our sons ov empire are better than their sons ov empire’.  (writers ov canon knew how to offend as much as those firing cannons).  we dont want to be part ov some disability ‘canon’ by kicking someones crutch away – breaking anothers fingers so they cant sign – poisoning assistance dogs – & just as we finally rise get clobbered by sanism / another heart-attacks / other … canon is only empire rewarding sons-ov-boris. 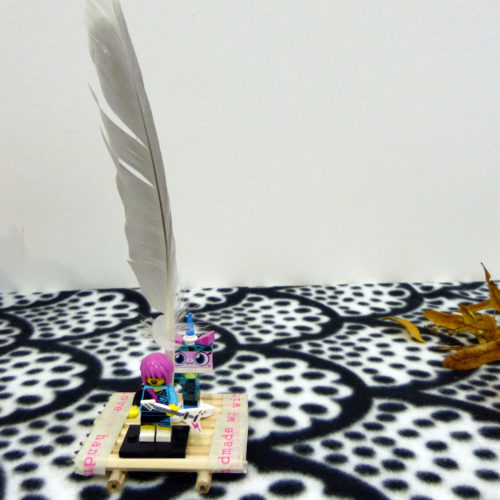 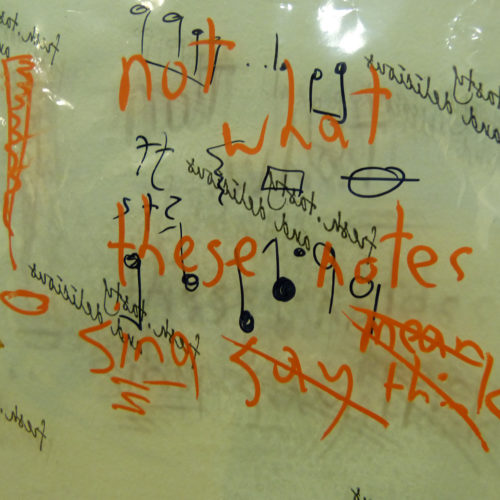 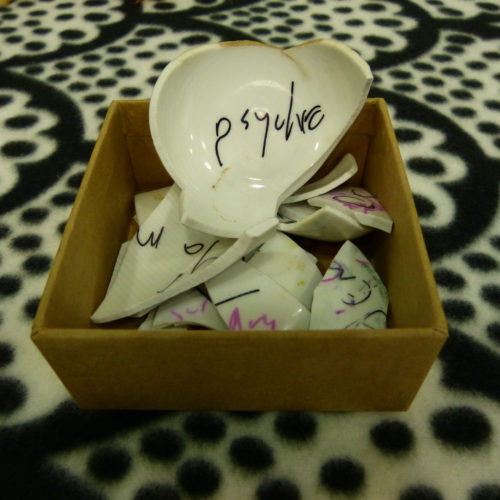 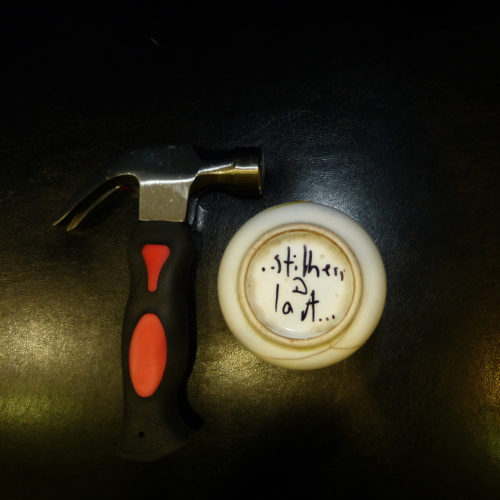 musical instrument of a stubby clawhammer slowly cracking a pot till were left holding the base which reads psycho – turn this over and audiences see ‘stillness at last’. photo credit gobscure

we are only amplifying what many others, tom leonard included, have voiced.  (clip ov tom including his poem ending in the beginning wz the sound

canons the wrong model for disability, for other aspects ov our identity also.  think on the implications ov how disability canon can only be ‘mini-canon’ (how disablist is that, yeah?)

andrew vachss says ‘anybody who has served in combat in any way understands that words are weapons. & i’m in a war. the war hasn’t stopped.’

laurie anderson in berlin 2017 replied when asked how to begin again with:

it’s a collaboration with the audience, hopefully… I think that the resistance will be in the language, & I think that it will be artists that do it.

a more useful model for us is bandwidth.  we talked bandwidth on a train with north-east mad studies collective (missing all ov yu’s, especially those no longer here) after a course in musselburgh.   we suggest bandwidth is a more useful model for anyone who has been othered – including by disability, sexuality, lack-ov-money etc.  bandwidth comes from computing – where capacity is added all the time.  bandwidth offers a wider vision not an inaccessible pyramid.

only the spaffer-johnsons have resource / sociopathy enough to climb over others so they can get up the pyramid.  a while later for nudging meteors in wakefield (thanks art house / mental health museum) we gave out broadside including ‘canon occupies the wrong space.  … from now on think bandwidth.  … r/evolution helping generate greater equality – in the spirit ov punk / d.i.y. – refuse to be silenced, add yr voices into the mix, sing out – before its too late – there’s more than enough room.  room for everyone.  canon controls.  bandwidth liberates.’

we’ve made mad sound forever – whether headbutting out windows ov asylum, drowning out homeless hostels noise with our own or sitting in the river tees singing wednesdays child is full ov woe – what happened  & getting ignored forever.  we believe in mad sound.  as we type clutch are howling ‘all the best locations are located on the margins‘ (50,000 unstoppable watts).

& yet we write this as an award-winning composer.  in our fifties & seeing others use that c-word for their sounds we use it for the first time & are rewarded with a francis chagrin award from sound & music.  this plus a summer studios residency with sage gateshead is allowing us to develop ships-ov-fool – about finding a hard-won peace. 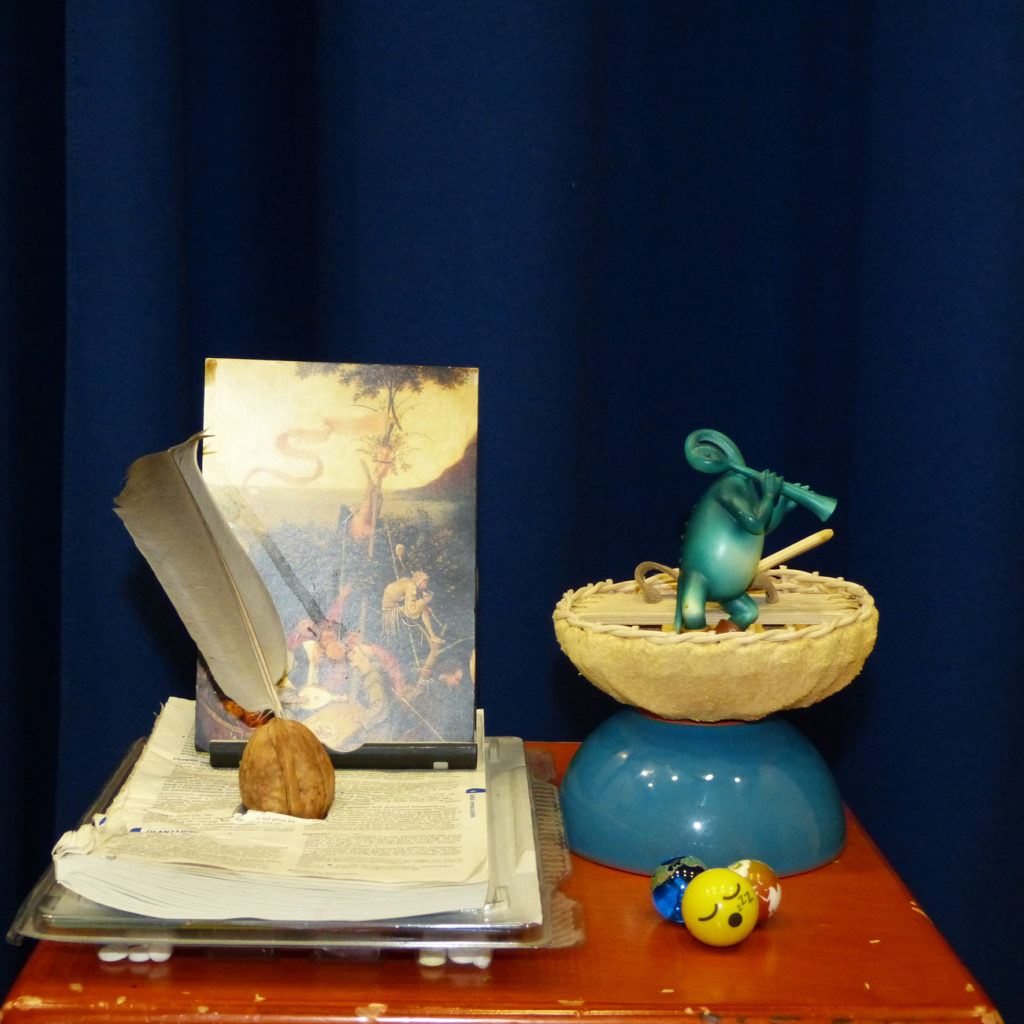 bosch ship of fools, plus a meds box (much sampled) plus marbles (ditto). photo gobscure

hieronymous bosch – whose (european) hometown ov den bosch gave the world red tape (& red tape saves lives) knew all about being provoked to madness.  look at the mutations ov creatures into instruments or musics playing as worlds disintegrate.  when we came across his art as teen – ship ov fools included – we felt we were coming home, someone else sees as we do.  musical instruments we’re working with include river tyne, hammers to crack pots, marbles in towers, a wind-up clanger, nursery rhymes & more.  photos attached.  get in touch to offer yr support so our mad (international) sound can be fully realised.

we’ve also literally delivered work including an album ov mad sounds to the group  exhibition art ov protest, cheers dolly sen.  these six decompositions are collectively called ‘a birds singing can still delay laws’.  this album will be part ov our solo show provoked to madness by the brutality ov wealth, touring in 2020, thanks in part to us being accepted onto third angel sheffields boost scheme.  the group exhibitions in bedlam – we travelled so far south we went underneath london, had to ask where we were.  turns out bedlams in kent, home to jeremy hunt & theresa may.  dada  wz an international artists response crossing fronts ov world ward one, ov gender, artform, language-divides, money & more.  anti-art, diy as fuck, folks knowing they could die tomorrow making mad art / sound across divides – tada.  kurt schwitters wz on the fringes but continued dada thru his life, he really wz disability arts.  schwitters final artwork is here in toon (newcastle).  his maddest  sound is the ur-sonate.  jaap blonk performed it against 2000 stranglers fans in utrecht in 1986, describing that gig as an away-match, surviving projectiles cos the soundsystem wz on-side.  a 2005 version can be found below

we loved reading vivien goldmans revenge of the she-punks and listening to the cd compilation of her work ‘resolutionary’.  (staubgold records.  2016).  the ‘unruly’ hildegard ov bingen, voice-hearer extraordinaire, punk as fuck almost a millennia ago – carving out what safe space she could for women away from trauma.  sure she would love diamanda galas wild women with steak-knives.

noise artist lingua ignota – whose name comes from hildegard ov bingens own invented secret language is one ov the most exciting howls in the face ov silencings.  radical in facing down violence, visceral yet honest about vulnerabilities.  raw yet transcendent as she triumphantly brings ‘let them fear me’ (https://linguaignota.bandcamp.com/).

austerity is not ov our choosing but it wz a declaration ov war.  as in any war some folks make a killing (atosers for e.g.), psy-ops (psychological operations) ov ‘scroungers – slackers – swarms’ & then erasing even the a word drives everyone over edges, & our bodies are piling up.  mad sound is about making some noise, about refusing to be silenced, about adding something into the mix – its bandwidth now on in.  so, among the voices & the stolen voices – lets make more noise, adding the bandwidth ov mad sound into the mix

some gobscure mad sounds can be found here

dash commissioned a film (mad sound is layered in) for awkward bastards in 2015.  firing the can n on is at

photos – collectively these document some of our ships-ov-fool.  musical instrument of a stubby clawhammer slowly cracking a pot till were left holding the base which reads psycho – turn this over and audiences see ‘stillness at last’.   a graphic score with liquid chalk marker, a riotgrrrl and unicorn pencil raft (contact-mike pencils for starters), bosch ship of fools, plus a meds box (much sampled) plus marbles (ditto), finally a close-up ov our arthritic hand with backing vocals provided by marbles (a sleeping emoji, and two different  worlds) – the sounds yu can make with marbles!

The Francis Chagrin Award is for composers looking for that quick top-up to get them to the next step in creating new work. gobscure was awarded a Sound and Music Francis Chagrin Award in August 2019. Click on this link to read about the latest recipients of the award. The next deadline for applications is 22 November 2019. With three rounds per year, meet the latest artists who have benefitted from that extra bit of money to make their projects a reality. 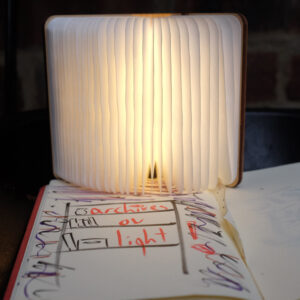 turn the book around e.p.

4 tracks of sound art culled from many sources longterm including residencies with dash, cesta & our associateship with greyscale theatre leading to touring joey after our worst sectioning (psychiatric prison) we discovered that creative industries had designed / marketed spoonrests. more recently shredder lubrication paper now exists - its sole function is to feed into ... 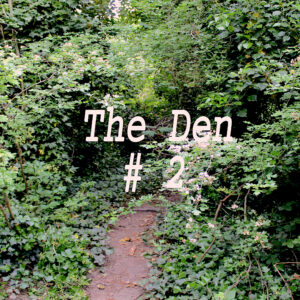 Sop, The Den: meditative sound art in response to lockdown

The Den is a series of meditative works in sound and other media that gather material from Sop’s regular trips to their ‘den’. As someone in the “clinically extremely vulnerable” category for coronavirus, Sop has been shielding. In response to circumstances during lockdown, they take solitary walks at dawn in a nearby wood and cemetery, ... 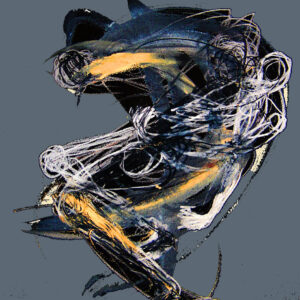 With my deteriorating eyesight caused by a condition called retinoschisis, sound has become an increasingly important part of my visual art practice. I am now conscious that I hear sound in my mind as I make drawing and painting strokes. In this blog I would like you to meet composer Freddie Meyer’s who I have ...

feel the magick change the age