Delta 7 is a seven-piece rock band from Eastbourne made up of learning-disabled members. On 12 March the band kicked off the Oxford Human Rights Festival at Oxford Brookes University. Following the gig, two of the band members, Mikey Reynolds and David Campin plus Julia Roberts from Culture Shift (which oversees the band) caught up with Joe Turnbull. Delta 7 before the gig at the Oxford Human Rights Festival

Delta 7 is a band which seems to be really going places. And I don’t just mean up the M25 from Eastbourne to Oxford. In fact, headlining the Oxford Human Rights Festival is just one of their recent achievements. In 2016, a short film made about the band entitled ‘We Rise’ won the Picturehouse Members Film Competition, meaning it was shown before every full-length feature at all Picturehouse cinemas across the country. Last year, they organised a crowdfunding campaign which smashed its target by 1548%!

But let’s rewind and find out how it all began. Julia Roberts is Associate Director of Culture Shift, a Community Interest Company which creates dynamic partnerships where the creative and cultural sector work with community, business and education partners. Roberts explains the origins of the band:

“Four years ago Culture Shift ran a pilot arts project for learning disabled adults in East Sussex and Delta 7 was an unexpected outcome of the music element of the project. Basically, by the end of a 10-week course, seven people were keen to continue to work together and be a band. Delta 7 was born and has gone from strength to strength.”  ​

Delta 7 is a collection of individuals with varying impairments who write and perform all of their own material. Their range of influences is highly eclectic, as Mikey Reynolds and David Campin explain:

​Mikey Reynolds: “We all like lots of different music. For example, I like Johnny Cash and Elliot (our guitarist) likes heavy metal!  We write all our own songs and we have try to vary the type of music we play so there is something we all like.”

The Oxford Human Rights gig came somewhat out of the blue for Delta 7, as Roberts explains:

​“Oxford Brookes University contacted us via our Delta 7 Facebook page. Someone at the University had seen our film, We Rise, and asked if we would like to play at the Oxford Human Rights Festival. The band were very excited to be given this opportunity. I think it is especially great that the band were invited when the theme of the festival is ‘identity’. It is important to acknowledge how important it is that people have opportunities to choose their own identity.  Delta 7 are a band, disability is only a part of a person’s identity, not the whole of it.” ​

“We travelled to Oxford on a coach together from Eastbourne,” says Reynolds. “We always like travelling together if we can. Transport is a big issue for us and it’s fun to be together. We sing and talk and have a laugh.”  ​

​Campin was unfazed by the opportunity: “We have done lots of good gigs but this is the first time we have performed in Oxford and that was great. We had a great time and everyone loved Delta 7. ​We would like to travel to other places too.” Delta 7 on stage at the Oxford Human Rights Festival

I ask Reynolds why Human Rights is a cause which is significant to the band:

“Well, it’s important to everyone, isn’t it? We talked about it and then we decided to write a song, especially for the gig. It’s called, ‘Everybody needs human rights’ – we need to be listened to, we need to be given a fair chance, that’s it really isn’t it? We all deserve that.”

The topic gets them all thinking about the barriers disabled people, and especially learning-disabled people face in the music industry. Campin explains: “It’s hard for people like us to be taken seriously. We think we can do whatever we want to now. Everyone loves us and we are brilliant!”

Reynolds concurs: “Yes, it’s about being given a chance, isn’t it?”

Roberts sheds some further light on the subject:

“It’s about opportunity. Mainstream music is always going to be about making money but lots of people are looking for something different, anyone who likes their music a little outside of the ‘ordinary’ will love Delta 7. Their music has heart and humour​ and it’s about a different take on life. It’s exciting and every time a new person hears their music or sees them perform, a little bit of the barrier comes down.  Bit by bit, things do change and I guess it’s up to people like Delta 7 to make change happen.”

Delta 7 had something of a tragedy befall them recently. Tom Salway who mentored members of the band and helped to establish it, sadly passed away last year.

​“He supported us and helped us to learn music and perform,” explains Reynolds. “We all loved him and miss him, simple as that.” Campin mirrors the sentiment: “He was a pianist and he helped me a lot playing the piano.  He was brilliant.”

“Tom was a big part of the Delta 7 family.  Everyone misses him, and he will always be a part of the band I think and we talk about him and think about him often when we are together.  Lots of special people used their talents to support other people and Tom was definitely one of those special ones.”​

To commemorate him the band launched a crowdfunding campaign on Just Giving, to try and secure the future of the group. It was an overwhelming success. With an initial target of £250, the campaign has now raised £3870 from 113 supporters. I ask them what is on the horizon for Delta 7. Reynolds is defiant: “We will keep going.  We don’t know what we’re doing next really.  We’ll just see what happens”. “We will continue to create original music and encourage the band to be bold and advocate for learning disabled people in a powerful and positive way,” says Roberts. “I have a feeling the future will be fun!” 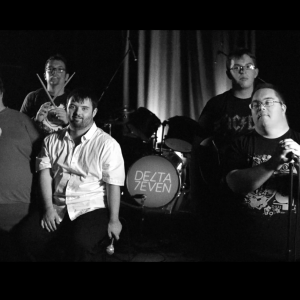 A band that found the limelight when they were the focus of the winning entry in a short film competition has been supported to take the next steps in their music career. Delta 7 have launched their catchy debut single, ‘The Jungle’. Delta 7 is a seven-piece rock band from Eastbourne, East Sussex, who write and ...