Deviation Street is a ramshackle out of kilter blog and magazine  – a hybrid mix of words and images that covers a range of creative pathways. Colin Hambrook asked its editor Brian Gibson aka Bri Nylon about the enterprise.

CH: What drove your love of the ‘zine’ back in the halcyon days of punk and your efforts now to keep the DIY feel alive? 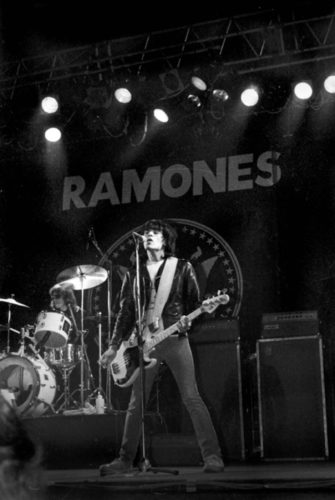 We relaunched Deviation Street the blog and the magazine last year with a similar DIY ethos. The publication is now a 16 page broadsheet which is the format that suits us. We continue to develop with each issue. It’s a hybrid of Art and Music across the creative spectrum.

The Blog has very much an open-door policy and we welcome contributions from writers, artists, musicians, poets. People are the heartbeat of what we do and so many people have been supportive in helping us out, it’s incredible.

As well as interviewing and reviewing bands we put on occasional gigs and open calls for exhibitions; it seems to work. As the song goes “Make it up as we go along, head in the sky, feet on the ground“.

We keep some material exclusively for the printed publication but we also select articles from the blog for the magazine. Alongside this, we have the archive material from the original fanzine with images of The Ramones, Talking Heads and so forth. We also have stories, fictional and true from tales of The Pope and Pinocchio meeting in a cafe in the Vatican City to the last of the free festivals and a day in the life with flatmates Sid Vicious and Nancy Spungen. 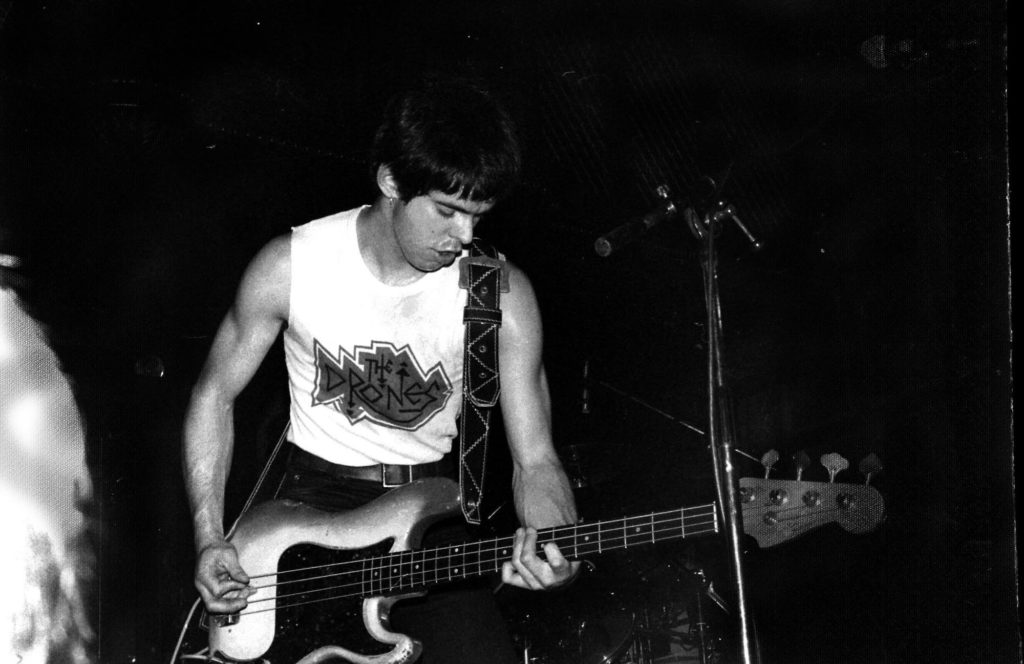 We know what we can put out a quality product, so now we are starting to look for sponsors and advertisers that fit in with our ethos. It’s another skill set to develop! We are also on the lookout for new staff, particularly if people have skills in social media, design and especially bookkeeping. No one gets paid at present, but everyone who contributes knows this, we put on occasional gigs and art exhibitions so there is a sense of supporting each other. It’s like being in a band where your forking out money just to get started. The returns from sales go back into the print run or events.

CH: 40 years on being labelled deviant has potentially even more precarious connotations. What were your thoughts when deciding to keep the name when relaunching the blog and magazine? 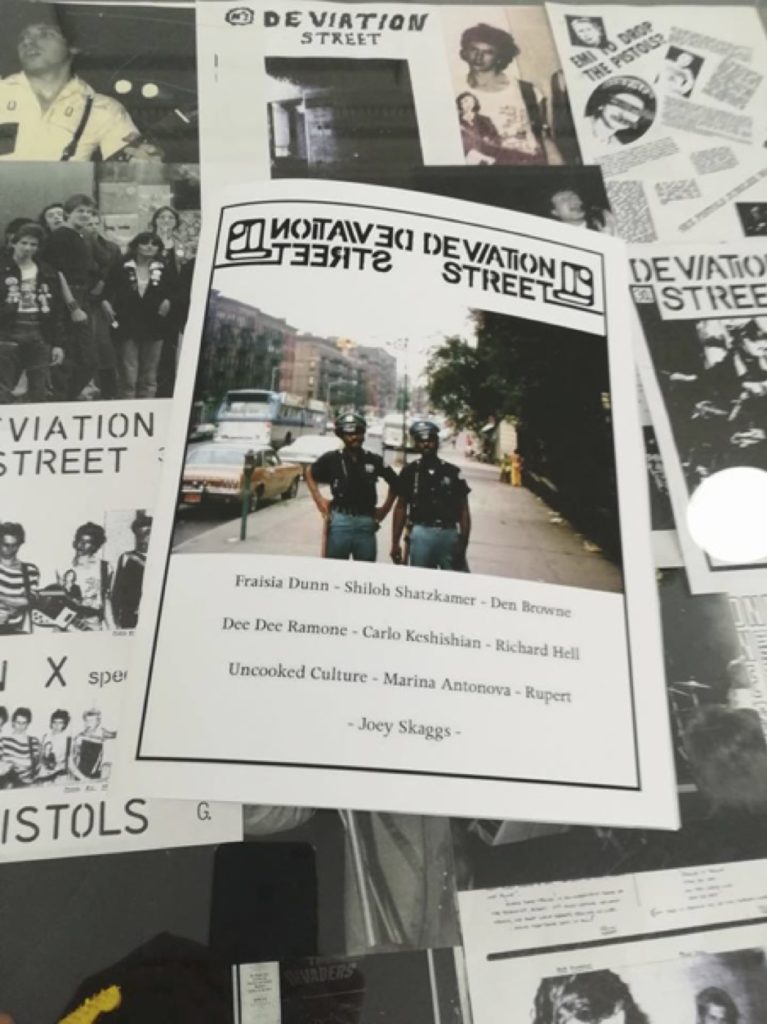 BG: I don’t think any of us involved with the publication consider ourselves to be ‘deviants’ as such. Rather, I think we are people who have deviated from certain pathways. It’s not like we even chose to take some road less travelled because its ‘on trend’ or ‘alternative’.

It’s just that we ended up where we are and are trying to make the best of things: a disparate bunch of folk who have either come from or ended up in a similar place hence the Street aspect. The Street is something local and globally understood.

When relaunching the publication I did consider some other names, one relating to the Sturm und Drang movement of the late 18th century, and another a kind of funky punky Peoples Friend but I think Deviation Street covers both these aspects, homely, passionate and driven.

I believe that that whole DIY ethos maybe more relevant now with the digitisation and branding of culture, which stifles creativity and thoughtful expression. It’s very easy to just become a passive consumer, acquiring more and more apps to pass the time. Most of what we hear and see seems to come from the top down and for so many people the aspiration is simply to be a celebrity. I  just don’t get that. The interesting stuff springs up elsewhere and from unexpected places. 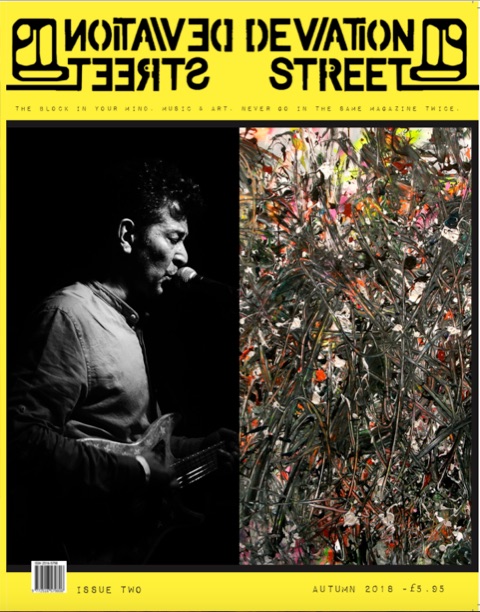 Issue 1 came out in May 2018 as a 62 page magazine along with an exhibition of artwork by the featured artists at 44AD Gallery, Bath. The original intention was and still is to produce a quarterly Magazine. Coming into this from scratch has been a learning curve with several curve balls to match.

We managed to produce  3 issues in our 1st year. Interestingly,  most fanzines tend to last between 3 and 6 issues, we have become are Tortoise than Hare evolving into a broadsheet newspaper and so I think we will be around for a good while.

BG: Silence… I love silence, I was fitted with two hearing aids earlier this year and have (not) been getting used to wearing them, taking them out and feeling the silence is bliss.  Music wise, the list is endless. I still enjoy the idea of listening to a full album. I can be partial to a lot of things, from bursts of Afropunk to Fischer Deiskau .  Certainly, how and when I listen to music has become more important to me. Art-wise Ben Shahn and Bruegel the Elder are two painters that spring to mind but the list again is endless. Within Deviation Street we are considering the idea of putting out a CD by the artists that we cover.

CH: You took some wonderful shots of some punk legends back in the day under the artist name Bri Nylon? Do you have any thoughts on the synthetic revolution originally started by Wallace H Carothers back in 1939?

BG: Ha ha. That’s an interesting question. I guess the notion of synthetic fibres has gone full circle and so he could be seen as a pioneer who lead a pathway to the development of organic and  biodegradable synthetic fibres, which is  better than the industrial production of non-organic cotton with its heavy pesticide use and pollutants.

If you are interested in getting involved, either as an editor, writer, contributor or with experience of sponsorship contact Brian Gibson deviationstreet101@gmail.com
https://deviationstreetmagazine.com/