Nwando Ebizie’s ‘Distorted Constellations’ is an exhibition that uses sound, projections and holograms to immerse the audience in the imagined landscape of the artist’s brain. It is co-presented by Lighthouse and Brighton Festival and co-commissioned by Unlimited, Eclipse Theatre and HOME. Distorted Constellations is on display at Lighthouse 4-19 May, accompanied by various live performances. Liz Porter reports on its opening ceremony/performance. 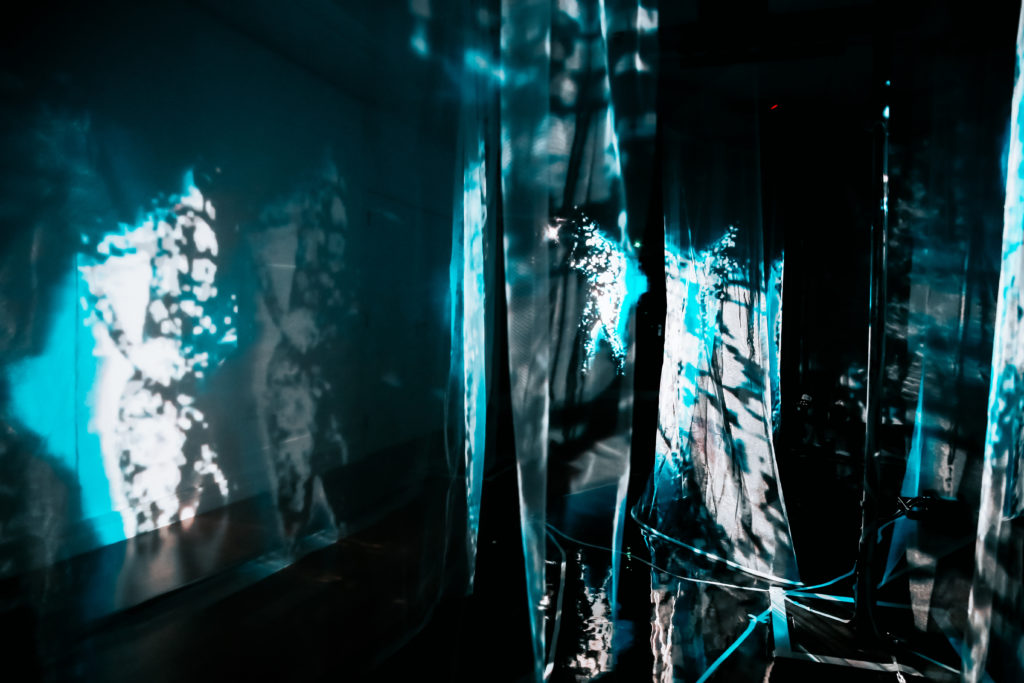 “I wanted to create an immersive installation that would externalise my internal reality demonstrating and normalising the subjectivity of perception,” says Nwando Ebizie about Distorted Constellations, an Unlimited commission. It invites audiences to actively consider how they visually and neurologically perceive the world.  A kaleidoscope of vibrantly coloured shapeshifting lighting encourages active participation in exploring its themes. Highly energised pulsating soundscapes are an integral element, as are the forces of nature and elemental representation of earth, air, fire and water. It’s a creative exploration of Ebizie’s condition, known as ‘visual snow’. As someone with a visual impairment myself, I was intrigued.

I have fond memories of Dreamthinkspeak’s Don’t Look Back, PunchDrunk’s The Masque of the Red Death and Fittings Multimedia’s previous Unlimited commission, The Ugly Spirit, at each of which the audience was encouraged to interact with the installations and performers through touch dance smell and taste. This allows the audience to get inside people’s worlds and ‘creatively play’. So I had high expectations of Distorted Constellations. 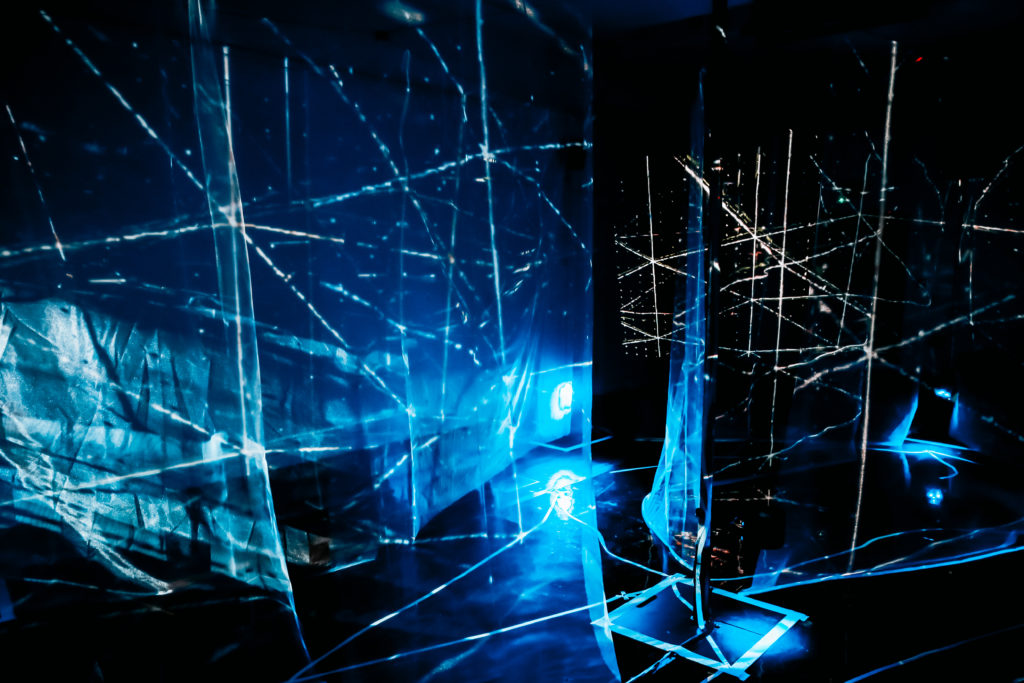 “I wanted to invite everybody to be a scientist to strive to break our own realities,” explains Ebizie. “And to think about the things that make us uncomfortable to understand how our perceptions feed into cognitive bias. Neurologically speaking, we are all on a spectrum of neurodiversity”

In the opening ceremony/performance, an audience of around 50 people were welcomed to take part in a circle influenced by Haitian ritualistic dance to awaken the space and invoke the elements. A world of earth (flour) was created in front of us, sweet smelling water and delicate scented pink flowers were handed out, whilst three women performed a powerful dance in the centre.

Ebizie exuded a strident force of nature clad in a silver cloak, whilst her collaborators Karina Labelle and Jennifer MT White, moved evocatively and with grace.

Movement and glare in the white snow installation reflect the difficulty in navigating through space and depth perception with a visual impairment. Ebizie creates channels for conversation between the medical and social models of disability.

I’m not sure the space at the Lighthouse is fully suitable to host such a large audience within the installation; it felt too small and you could sense the shape of the room too much. It also had a clinical feel, but perhaps this was deliberate. On a subsequent visit, with fewer people in the space, it was much more atmospheric and mesmerising. The location is hugely important for supporting emotional engagement and showcasing the work. 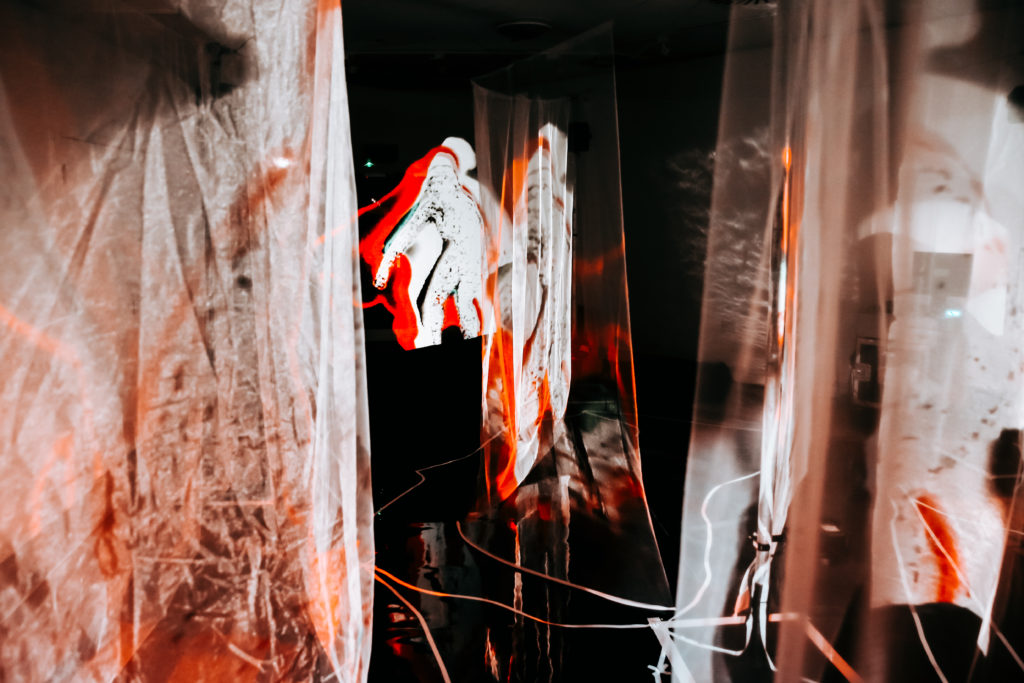 Equally important, is the technical support and practical logistics of organising how audiences move around. It should feel seamless. It was clear that a great deal of work has gone into Distorted Constellations, with collaboration between the artists and venue staff. However, they needed a bit more practice with timing and considering diverse access needs in each activity. It’s really hard to know what’s happening in this kind of set up if you are visually impaired and I didn’t feel connected or able to fully join in.

As the night unfolded, the space was transformed into a lounge with soft cushions to lie on and ambient lighting. A scientist talked about perception and we were encouraged to interact – unfortunately unsuccessfully – on our mobile phones, in an attempt to make the point that we experience the world differently. Backed by her digital sound score, Ebizie then read the story of ‘skeleton woman,’ a dark transformation myth that evokes death and re-birth and we were left to contemplate our own ‘rebirth’ moments.

The marketing had promised a multi-sensory experience that included potential head and hand massage and pancakes in addition to the above. I missed out on this and some of the more exciting digital elements, because it wasn’t clearly stated how long the performance would be, so I inadvertently left early, which was a shame.

Despite teething issues, the project has great potential and scope to reach broad audiences and to open up conversations between science and creativity. There are many fun elements in the creative play space. I reckon it’d go down brilliantly in clubs or universities and in such settings as The Vaults. It’s great to see a venue like the Lighthouse embracing the challenges of presenting this kind of work, and I think it will only improve as the festival goes on.

Distorted Constellations is on at Lighthouse, as part of Brighton Festival until 19 May, with multiple extra performances and activities.