“Dragons represent the fears and worries we all have”: Taking Flight director Elise Davison talks to Kate Lovell about their accessible children’s show, You’ve Got Dragons, and how integrating access into all of their productions has made for a unique brand of theatre. You’ve Got Dragons is currently on a tour across Wales and England. You’ve Got Dragons is an accessible family theatre show based on the picture book written by Kathryn Cave. It’s a beautiful story that explores one child’s journey to come to terms with their dragons.

The show has been developed with access at the heart of the creative process, integrating BSL, creative captions and audio description; it’s our most accessible show to date.  It features live original music which is played on stage by the actors, and the set has incorporated tactile and sensory elements.

The dragons mentioned in the title are the physical representation of the fears and worries that we all have. The play explores how we don’t necessarily know why we get dragons, but they can be scary and frustrating when we get them – especially the first time. Children’s dragons are often not given the attention they deserve.

We get dragons when we go to bed, turn off the light, go outside or to a busy place, start a new school, or a new job, when we struggle to understand something and feel under pressure, when we move house, after a break up, if we are bullied, but often for no apparent reason at all. It’s a show that we hope is intergenerational and is something which can be enjoyed and discussed by the whole family.  When we performed the first version of it in 2014 we were told by a grandparent who was Deaf that it was so great to be able to discuss the show with her grandchildren afterwards.

When we set up Taking Flight, we were adamant that we did not want to only provide access at one or two of our performances but all of them, so that everyone could choose exactly which performance they wanted to attend, regardless of access requirements.

Every year since 2008, Taking Flight have produced an outdoor tour, usually Shakespeare, and we have always integrated BSL into these performances.  Over the last few years this has really developed in style as we have brought in more BSL consultants and have worked with more D/deaf actors.

Access is the starting point in our artistic process and it’s an exciting creative tool which brings so much to the work.  As most of our work has traditionally been outdoors we have struggled to find a way to caption it.

Last year, we built a beautiful 1960s style caption box, found a small projector that could work wirelessly and spent ages creating colour coded captions for the entire script.  We excitedly took it outside to trial it and we were totally foxed by the sunlight!

You’ve Got Dragons is our most accessible show to date. Television screens are built into the set and the captions have been designed to complement the visuals, and we have tried to make them visually stimulating and humorous for a pre-reading audience. We worked with Brian Duffy, a visual theatre consultant, to make sure the sign language we were using was suitable for younger audiences.  A lot of the time we have moved towards using Visual Vernacular which is a form of visual theatre which uses physical gesture, facial expression, iconic signs and mime.

VV works really well for D/deaf and hearing audiences alike, especially those who aren’t necessarily BSL users as it doesn’t rely on an understanding of BSL. Some young children are not yet fluent or use simpler signs – we spent a lot of time discussing which ways to interpret the spoken English in a way that was accessible to D/deaf/hard of hearing children – we often favoured an approach that used VV, which is bigger and more theatrical than pure BSL.

We have been developing our own style of live audio description, most successfully last Summer in our 1963-influenced Romeo and Juliet, which was set in a school environment.  The audio describers where prefects and accompanied the action throughout, audio describing via a school radio station using song, sports commentary and sound effects. It was subjective and daring, but we think it really worked.

Integrating access throughout the rehearsal process means that we start with this, which can seem like a strange way to approach rehearsals for some actors, but most people who visit our rehearsal room find it a fascinating way to work.  Sometimes, however, it can lead to us getting caught in what we call the ‘access circle’. If the Visual Vernacular or BSL interpretation is particularly funny or beautiful, we then feel the need to AD it, but then the AD is funny for other reasons, we feel that we need to interpret this with sign language, but then this is also funny and so we need to AD it and so it goes on! Eventually we draw a line under it and wait for the audience response.

We are based in Wales, and we don’t have as many inclusive companies here as in Scotland or England. It would be fantastic if a Welsh venue signed up to the Ramps on the Moon initiative. We have the Hijinx Unity Festival which brings excellent international inclusive work to Wales. However, it is disappointing to see that, in a time when most people are becoming more aware of inclusion, some venues have reduced the amount of accessible performances in their venues.  The shift in attitude needs to come from the top and when the people at the top aren’t interested it’s a hard battle to fight.  That’s why the Ramps on the Moon initiative is so great as it’s supported wholeheartedly by all the venues involved.

We have had a fantastic response from audiences mainly because we create really good theatre and most people love the creative access and comment on how it improved the quality of their own experience, even though they had no access requirements.  Most of our audiences don’t know our work is inclusive and we don’t market ourselves as such. My co-director Beth and I look forward to a time when there won’t be a need for the words inclusive and accessible in relation to theatre as all theatre will be just that.

You’ve Got Dragons is produced by Taking Flight and tours England and Wales until the end of May. 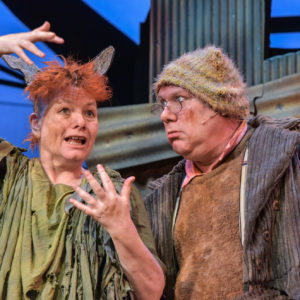 Derby Theatre's family friendly production of The Jungle Book is playing until Saturday 20 April. Award-winning writer Neil Duffield’s new adaptation is inspired by Rudyard Kipling’s magical stories with fully integrated BSL interpretation and captioning. Review by Melissa Mostyn Raised by wolves as an orphan, Mowgli continues to live and play in the jungle until the ... 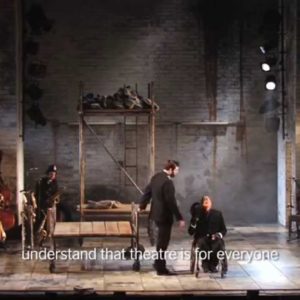 Disabled people have had to fight to have their basic access needs met for decades in all areas of public life. The arts are no different. But out of struggle often comes innovation. In the case of the performing arts, sign language interpretation, audio description (AD) and captioning are the main areas of access provision. ... 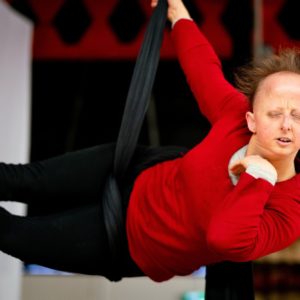 Extant and Yellow Earth theatre companies have joined forces to present an ambitious new play which involves innovative approaches to writing, choreography and technology to integrate access into aerial silk performance. At the culmination of a five-year process of research and development, DAO hears from Maria Oshodi, Kumiko Mendl, Glen Neath and Vicki Amedume reflecting ...