Multi-sensory children theatre company Oily Cart was set up in 1981 by Tim Webb, Max Reinhardt and Claire de Loon. The latter left in 2016, with Webb and Reinhardt stepping down last year. Having worked with the company previously, Ellie Griffiths was recently appointed the new Artistic Director, alongside Zoe Lally as Executive Director. This autumn marks the first productions under the new stewardship; Jamboree is currently touring special schools and Christmas production, All Wrapped UP is at Artsdepot, London 10-31 December. Joe Turnbull speaks to Ellie Griffiths about her new role. 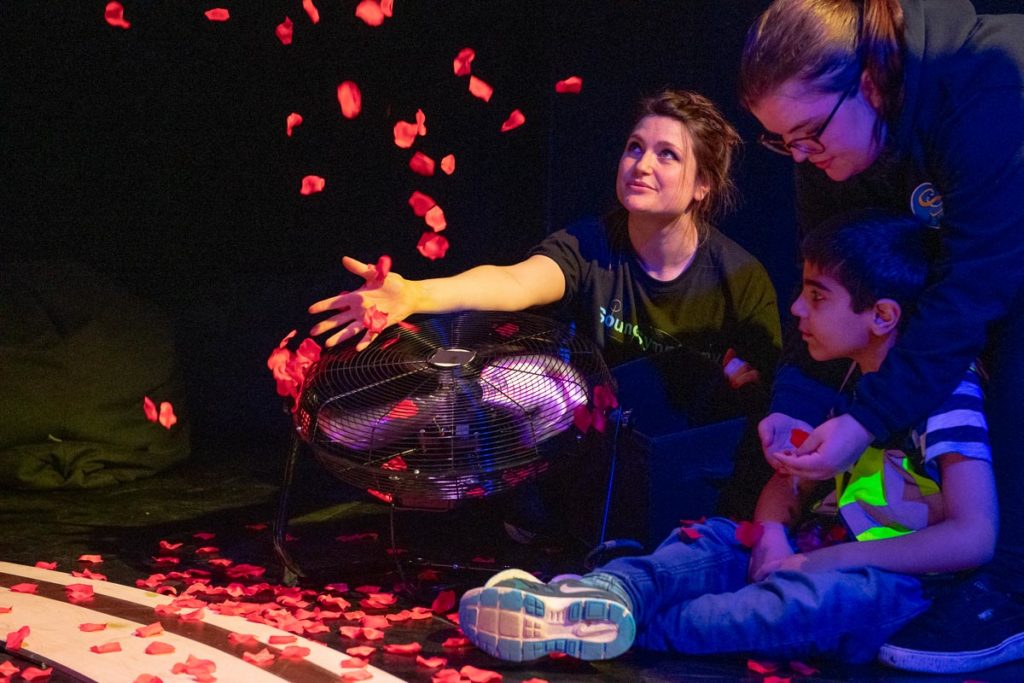 Ellie Griffiths has come a long way from performing as her alter-ego, Dr Wonderpants, a Clown Doctor for Theodora Children’s Charity. “For me this was theatre,” explains Griffiths. “It didn’t make sense to me unless it was in contexts where it activated or shifted something.” Coming from that kind of performance background, making work in non-traditional settings, with non-traditional audiences, seeing a company who embraced and championed that approach was a seminal moment for Griffiths: “When I first saw the work of Oily Cart it was like an epiphany, bringing together everything I was interested in. After lots of pestering them, I began working for them as a performer in 2011, and became totally obsessed with sensory theatre practice.”

Griffiths stayed with the company for five years, working as a performer in Gorgeous, Something in the Air, There was an Old Woman, The Bounce and Tube, before stepping up to the role of director for Mirror Mirror. “The best thing about these shows is that you never know what is going to happen,” says Griffiths. “I have a memory bank bursting with beautiful, hilarious and weird moments that are my motivation for continuing to do this work.”

“One of my most precious memories is from doing Bounce, which was a trampoline show. As we were singing, gently bouncing along to the music, a member of the audience positioned himself with his head under my chin (to feel the vibration of my voice I think) he began harmonising through his vocalisations and stayed there for a really long time. I remember the lighting was very beautiful and tears were streaming down my face. The word connection comes to mind whenever I think of the shows…countless intense, often unexpected moments of unguarded, authentic human connection.”

“I also remember the first time I ever performed for the company – one child was dancing to the music in a totally uninhibited way, one was sat with a washing basket on his head, another was playing the percussion alongside the musician and another was on the floor licking my shoes as I sang! I really remember this moment where I just thought ‘this is brilliant. I love this.’ I feel like I’ve re-learnt the world from these interactions with people I might never have met otherwise. This work teaches me to be more present, more spontaneous and to stop talking and listen with my whole body. It’s the most alive, spontaneous performance environment I have ever been in as performer or audience.” 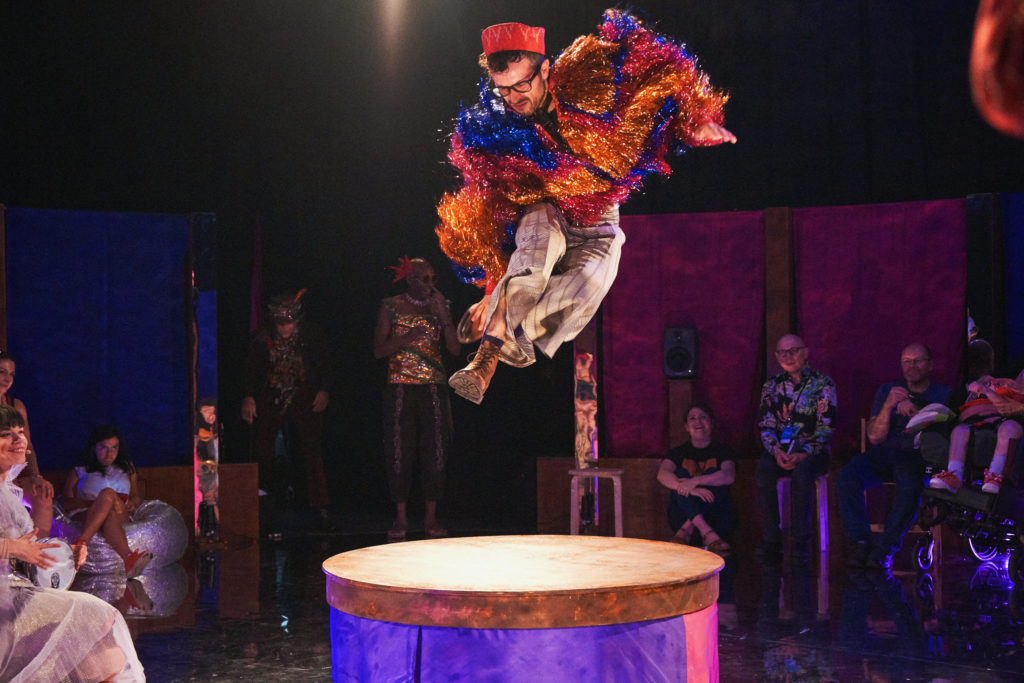 All good things must come to an end, and in 2016 Griffiths decided to up sticks and move to Scotland to make her own sensory performance work, as she explains:

“There wasn’t much provision for audiences labelled as having complex needs happening there at the time. With Independent Arts Projects, we were quite strategic in both making high-quality work and being a catalyst for more artistically accessible theatre to be made. During this time I started the Upfront Network – connecting international sensory theatre-makers – which gained a lot of traction. I also completed a Winston Churchill Travel Fellowship, looking at new approaches to making sensory theatre across the globe.”

Clearly, Griffiths was making serious inroads north of the border at the time Tim Webb and Max Reinhardt stepped down after nearly 40 years at the helm. “When I saw job advertised I was quite set on my career path in Scotland so wasn’t planning to apply,” recalls Griffiths. “Then whenever I thought about someone else doing it I had a really emotional reaction because I just felt really strongly that no one would care as much about it as I do. So I thought I should give it a try and let fate decide.” Evidently, fate was on her side:

“This role is my dream job. After years of struggle as an independent artist it actually feels weird to not be clawing for anything anymore and to be very very content. I can’t now imagine myself doing anything else, its a wonderful feeling. I realise how lucky I am to have the relative stability of core funding and access to the resources that the company has worked hard to build up over the years.  The selection process was long and fairly gruelling (as it should be). When I finally got the news I was shocked and overwhelmed, it meant such a big change for my life. Beneath it all going on, and at times feeling overwhelmed, I’ve had this quiet confidence throughout. I think it’s because, although  Its the biggest opportunity of my life, in a way it feels more like coming home. I’m really aware of how lucky I am. Every day I feel so excited and energised working with Zoe, and the rest of the team to take the company forward.” 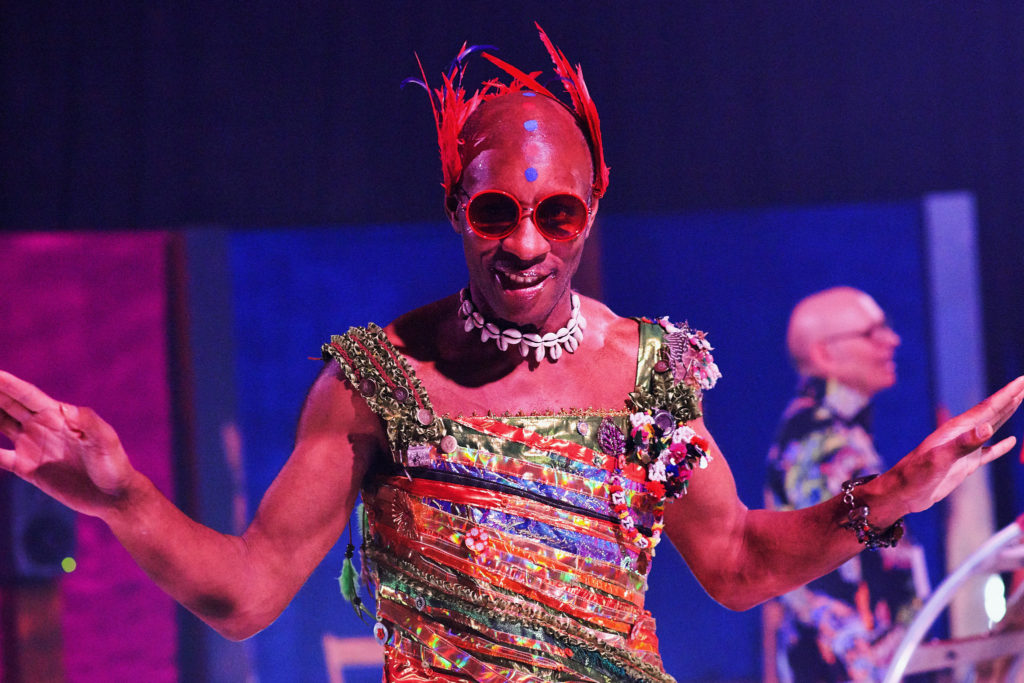 Even well-oiled machines need to be taken in different directions to keep progressing. Griffith’s expands on the competing needs of bringing something fresh, whilst keeping a winning formula:

“The founders are all passionate about this work continuing to evolve and know there’s lots more left to explore. Having come from being an independent artist, I have a clear sense of what feels authentic to me and I think its really important for the work that I stay true to this. Good work is never an imitation. I have such a love and respect for the company’s legacy, but I am also really excited about where we can go to next, and I feel confident in Zoe and my ability to carve out this new route. It’s a hugely exciting journey to be on.”

“As Zoe and I are joint CEO’s, we are naturally leading the company in a more collaborative style, we already have a really strong, supportive partnership. We are a proudly female-led company, which is different. All of us feel passionate about working to increase diverse representation at every level of the organisation to enrich the work we do. We also have lots of research projects planned, looking at ways of collaborating with young people to make the shows. Advancing communication technology brings new opportunities for this which we are keen to explore.”

“I am a bit of a creative magpie, so love testing out new forms of sensory work, collaborating with artists from different disciplines, so you can expect lots of continuing to play with form and setting. Staying curious is at the heart of it for us. We want to keep learning, keep exploring and keep sharing so that sensory performance practice continues to thrive. What I hope to protect and continue is the company’s sense of playfulness, generous spirit and rigour in all our working practices.” 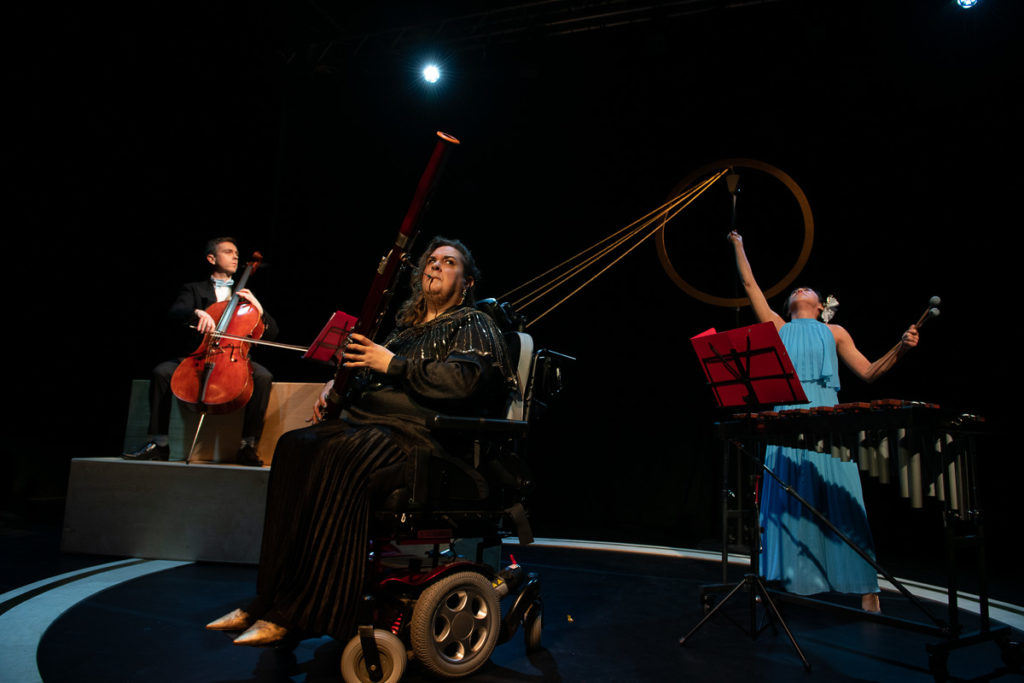 This autumn/winter sees the first forays under the new leadership with Jamboree and All Wrapped Up. Jamboree is a sensory-gig performance for teenagers who are labelled as having complex needs. The tunes in it were co-created with young people who are non-verbal. On tour each week it begins with two members of the band spending a few days jamming with young people in a school. This input is then integrated into that week’s show and the young people come to see their tunes performed to them by the full band.

All Wrapped Up, on the other hand, is a devised, non-verbal and highly visual show exploring shadow and light. “The theme is about the power of imagination and it really encourages creative play between families with simple materials,”  explains Griffiths “We want this piece to really be immersive, so one element I am really excited about is the ‘sensory soundtrack’ which is triggered by torches live during the performance. This will be fed through to seating where the audience can feel the vibrations through their whole body.”

Next year, Oily Cart is re-touring two existing works in Jamboree and Sound Symphony. “This leaves room for us to do some meaty research and development, to seed in ideas for future projects,” Griffiths explains.

“It feels like we are beginning this new chapter at a really interesting point… where new questions are being asked, and more artists and venues are becoming excited by the potential of inclusive practices. Against such an uncertain, troubling political backdrop, it feels great to be a small part of positive changes happening to make our country more inclusive.”

All Wrapped Up is at Artsdepot, London 10-31 December. Find out more about Oily Cart.