Lesions in the Landscape asks ‘How do our individual and collective memories influence our understanding of society?’ Susan Bennett reports on an exciting art/science collaboration on show at FACT, Liverpool, which parallels the effects of amnesia on one woman and the evacuation of the inhabitants of St Kilda in the North Atlantic in 1930.

“In an attempt to stimulate Claire’s memory of the visit to St Kilda there is an array of 32 microphones hanging from the ceiling.” Photo © FACT

Imagine you have no past, and no future you can recognise. Every moment you experience is blinkered, narrowed into the here and now. You see what’s there, experience things happening, but it soon fades. You have no past, nothing left to imagine the next day, month or any moment of your life to come. Nothing lingers in your head. Welcome to Claire’s world.

Claire is an active collaborator in a research project, called Lesions in the Landscape, led by Shona Illingworth, an artist who works across sound, film, video, photography and drawing. Following a trauma to Claire’s brain, which created a lesion and her memory loss, Shona explains: “Claire can no longer remember much of her past, she cannot create new memories or recognise faces, even her own.” Because she is unable to hold onto her experiences she cannot put together a story of herself, who she is or easily articulate, express, or communicate what it feels like to experience the inner landscape of her life.

For the last four years Shona and Claire, with a team of academics from London, Exeter, Glasgow and Sydney with specialisms in neuropsychology, experimental arts, philosophy, geography, history, science, writers and researchers, have been exploring ways of enabling, explaining and empowering individual and collective memory using science and a wide range of expressive media.

By gathering data and insights gained when they visited St Kilda, a remote island in the Outer Hebrides, which was evacuated quite dramatically 85 years ago dispersing a community that had been there continuously for 2,000 years, the team have together drawn out similarities between the sudden loss of Claire’s memory and the schism in the cultural memory of St Kilda in 1930. In the process they have identified problems in reconstructing a past, which has to be largely written by someone else and developed creative collaborative solutions across their own areas of expertise, Claire being her own expert by experience.

After four years the project culminated at FACT in Liverpool with presentations involving an expert panel discussion with members of the team, multi-screen installations and an Amnesia Museum with items and artefacts. These reflected not only unusual ways of expressing Claire’s loss of identity and the capacity to imagine the future but innovatively using images, maps, models, photos and pictures of St Kilda in the North Atlantic, mapped scientifically how Claire experiences the world. The exhibition aims to evoke the reality of living perpetually in the present, searching for memories whilst relying on others or technology to fill in the gaps.

The landscape of St Kilda, itself a site of scientific investigation, is a pallet on which the team of experts have investigated aspects of Claire’s perception using their own special knowledge and areas of interest.

For example: You see three large screens each depicting a hillside on St Kilda, where three or four people wander the hillside with torches, searching. Each of the screens is darker than the other so gradually you lose the ability to ‘find’ what is there and like Claire, struggle as you can only see what the torch randomly illuminates.

A sensory operated camera which Claire wears round her neck is shown, with Claire watching the resulting downloads on her computer, which form her private portable memory. A set of pinhole pictures of St Kilda with brief snapshots of faces, places, events shows how Claire sometimes experiences memories in separate episodes.

In an attempt to stimulate Claire’s memory of the visit to St Kilda there is an array of 32 microphones hanging from the ceiling, a representation of the sonification of Claire’s EEG. Each plays a sound produced by Claire’s brain activity when she saw photos of the trip.

A set of GPS slides produced by the geographer give another snapshot of the trip and were something Claire was particularly attracted to as a memory stimulus. You can even see a 3D scale powder print of Claire’s lesion, the cause of the disruption in her internal landscape.

This is more than a premier of an exhibition, it is a partnership between science and art, academics and the expert collaborator, Claire. It is a thoughtful evidenced exploration of what it is like to live in the now, and in many ways is as beautiful as intangible, scientific as elusive, challenging and illuminating. As I left, I wondered how Claire, who has been all along an important collaborator in this project viewed it, seeing it as if for the first time in the narrow spotlight of her lesioned landscape, sandwiched in the narrow now between no accessible memories of the past and an equally unimaginable future.

—
Lesions in the Landscape after premiering at FACT (Foundation for Art and Creative Technology) from 18th September to 22nd November 2015, will tour to the UNSW galleries, Sydney, Australia, Taigh Chearsabhagh Museum and Art Gallery, Outer Hebrides and finally to Dilston Grove and CGP Gallery in London. An accompanying book will be published in Autumn 2016.

The exhibition is produced by FACT and is supported by an Arts Award from the Wellcome Trust with additional support from the University of Kent. 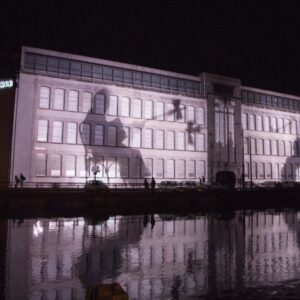 In Conversation at FACT Liverpool

Building on a fifteen-year history in creative collaborations, 'In Conversation: Discussion event on Arts, Disability and Collaborative Practice' on 1 April 2016, kick-started FACT Liverpool’s new spring programme which aims to explore disability, art and communities through a series of pop-up exhibitions. Review by Jade French. In tandem with this discussion event is the first exhibition ... 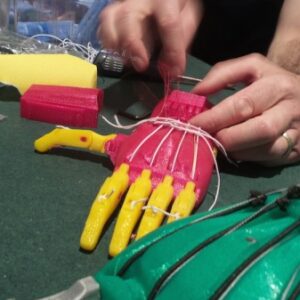 DoESLiverpool are developing an iteration of the Enabling the Future project within the Build Your Own: Tools For Sharing Exhibition at FACT in Liverpool until 31 August 2015 with the Crafts Council and in association with Norfolk Museums Service and Norwich Hackspace. Review by Susan Bennett. Ross Dalziel, Patrick Fenner and Adrian McEwen who are permanent ... 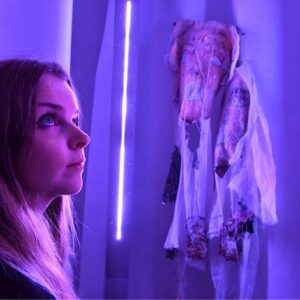 Originating from FACT’s extensive work within mental health and wellbeing, Group Therapy explores the complex relationship between technology, society, and mental health. Jade French responds to the brilliant lens the exhibition holds up to some of the darker aspects of living with mental health issues. Group Therapy urges audiences to rethink their understanding of mental health ...