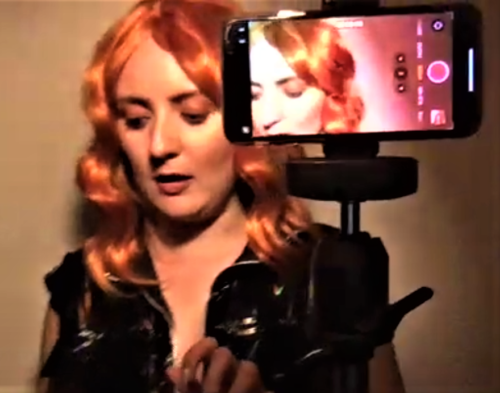 Philippa Cole as Mim in a filmed scene for Siege

“The whole world’s a stage; except the stage I’m not let on” : this line in Wreford-Sinnett’s Siege powerfully encapsulates the double-discrimination of disabled people. We are forever observed but never seen. This early iteration of Siege may be a snip of a monologue at twelve minutes long, but the piece sure packs a political punch.

It is a dynamo solo performance from actor Phillipa Cole and is chock-full of witty and cleverly explored disability politics and feminist issues. There’s so much to think about and so much to get angry about: it’s a delightfully fizzing adrenaline buzz to watch and witness. Feel the fire course through your veins as Mim (“rhymes with quim”) tells her story of being fetishised and sidelined as a disabled woman. Any disabled person, particularly women, will be nodding furiously, crying in recognition and laughing in shared understanding with Mim as she shares her hilarious but heart-breaking experiences working as a barmaid. The direct address works brilliantly: Siege feels like an intimate chat with Mim, as if we’ve been invited into her home to gossip and rage over a cuppa, or maybe a glass of something stronger.

Mim works in an exotica bar where the nightclub’s owner, the sweating and stinking Hungry Steve, peddles “freaks” as cabaret acts for the braying men who come to watch, grope and salivate over any female they can lay their wandering hands on. Though Mim’s initial ambition was to be an onstage performer at the cabaret club, she’s filed under “background curiosity” and shoved behind the bar.

She’s reassured that she can still get tarted up in her fetish fineries for the delectation of the clientele and will learn about performance by watching the other acts. This side-lining of a disabled woman into a lesser role than she is qualified for, wrapped up in the lie of it being a ‘learning opportunity’, made me bounce in my computer chair with furious recognition. It is a stark reminder of the state of play.

So often disabled women are told they’re “not ready” for their obvious next step: for the leading role in the musical, for the writing commission on the mainstage, for the biggest legal case on the books – even to perform cabaret on stage in a seedy basement club. Forever stuck as the quirky best friend, the black-box studio success, the paralegal or, in Mim’s case, the mini-skirted hostess with the mostess. When, exactly, will we be ready if we’re never afforded the opportunity to do what non-disabled men seem capable of sauntering into with nothing but their cock to qualify them?

Another strength of Siege is that it has been created for its medium – it is a film monologue to camera, rather than a theatre piece that has been filmed, and the careful design choices and edits allow a full immersion into Mim’s world.

Siege sits alongside a series of five conversations called The Wrong Woman Discussions, also hosted online by Home Manchester. Vici Wreford-Sinnott hosts, alongside artist-activists: Julia McNamara, Melissa Johns, Bea Webster and Tammy Reynolds (with BSL interpretation from Sue Lee). These are lively and fascinating debates delving deeper into the intersectional issues of disability and feminism that are raised in Siege, articulately illuminated by women whose lives are effected by this double discrimination on a daily basis.

Mim’s fightback against her oppressors is savagely satisfying and brings a Thelma and Louise-like energy to the short film. You’ll have to tune in to watch her victory strut. Billed as part of a larger production to tour theatres in 2021, it’s exhilarating to consider how Mim and Siege will be able to further flourish in a live performance.

The Wrong Woman discussions are free to watch on the Home Manchester website.