Under the heading of Interdisciplinary Disability Studies, Dr Alison Wilde has recently published Film, Comedy, and Disability with the academic publisher Routledge. Review by Mat Fraser Those of us who are familiar with some of the studies on Disability in film, will be aware of the seminal book by Martin F. Norden, The Cinema of Isolation. A great book explaining the framing and deeper understanding of the meanings involved with portrayals of disability on film – mostly within the film drama genre. Phrases such as ‘the objectifying gaze’, and ‘obsessive avenger’, etc have framed my understanding of so many films getting it really, really wrong, and occasionally a bit right.

However, one of the genres that has not had such an acute spotlight on it, is the use of disability in comedy films – a thorny genre for us crips, as it has so often made us the butt of their jokes. Well good news folks, one of our own and one of the best critics of disability portrayal in film, Dr Alison Wilde, has written a superb addition to the film and disability collection – and it’s mostly about comedy on film.

Film, Comedy, and Disability takes it all much further than any cross-referred analyses on the subject of comedy, disability and film have ever done before. She states up front that to really understand the finer, and deeper, nuances of the presented portrayals, we have to understand film studies as much as disability studies, also taking in appreciations of the persuasive use of light, colour, costume, and also review the context under which any production is made.

‘Good’, or ‘bad’ disability portrayal claims can be over-simplistic she argues, if you don’t also consider the what, where, why and when etc of the film-making. Indeed, nothing means anything without the context, and this book really goes along with that, with fascinating and inspiring results. As you read it, a deeper understanding of disability’s constructions emerges: of different meanings of impairment, and disability, society, culture, the norm, outsiders, ‘othering’ – all of these ideas and more, that go into constructing the perceived disability and disabled people in comedies on screens.

The book is concerned mainly with comedy, romantic comedy, and gross out comedy as genres to discuss the impairment and disability aspects, and uses case studies to make its points. Romantic comedy is a thorny one for us, and Alison illuminates much of the inherent problems most romcom makers have with disability. This is of course exemplified, though not so much of the comedy, in the apparently romantic Me Before You.

Now maybe like me, sometimes you see a film that is such an onslaught of sophisticated disability hatred, steeped in tradition and dominant cultural normality, that your inner objection to it seems like a pathetic, and ultimately doomed, drop in the ocean.

Speaking to this I feel, Alison’s deconstruction of how specific film scenes use many film techniques to bolster the social messaging, rendering it more powerfully normalised, is a real eye opener. For all disabled writers and filmmakers – and non disabled ones even more – it’s an invitation for us to make it better, using the same techniques, but to rebalance the historical usage of disabled people with weak metaphor and cliché ridden othering. She discusses film language that renders our point of view to be potentially powerful. It’s exciting!

For the gross out genre, unsurprisingly the Farrely Brothers’ work, from There’s Something About Mary, Dumb and Dumber, to Stuck on You, The Ringer, and others, is interrogated, and with really surprising results – ones that I felt were true and right. It was refreshing to have my inner feelings about some of these films and constructions of disability, corroborated.

I’ve always loved Stuck on You, about conjoined twins, one of whom wants to be an actor, and despite it being played by two non-disabled actors, and having so much ‘un-PC’ stuff, it gets right to the heart, I think, of the disabling social treatment that so many visibly different people experience. Alison makes a similar point, but also rightly savages some of the earlier work for being the very opposite of that, further ‘othering’ disabled people’s differences. She also takes a look at The Office and other work of Ricky Gervais; inevitably not altogether convinced of the ethos behind his work at all.

There are other chapters and much academic consideration is had, but I’m not an academic. I’m scared by the way academics speak sometimes, and yet this book was utterly accessible to me, fascinating, and compellingly inspirational. To have it laid out like that, to know how to combat that; priceless, and a real move forward

Its film, comedy, disability, the meanings, constructions, explanations, mass consumption of, culture, the future, and the meta-mélange that is the cake they all make. It’s a must read as far as I’m concerned. Check it OUT!

Film, Comedy, and Disability: Understanding Humour and Genre in Cinematic Constructions of Impairment and Disability is available from Routledge, priced at £88 hardback and £31.99 as an e-book 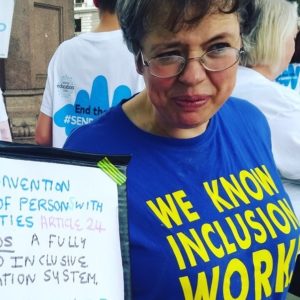 What’s wrong with the representation of people with learning difficulties in the media?

Simone Aspis examines what is lost when the voices of people with learning difficulties are excluded from the media Over the past decade or so the media has begun to take on board that they should diversify the representation of different groups of people including those with learning difficulties in their programmes and productions. As we may ... 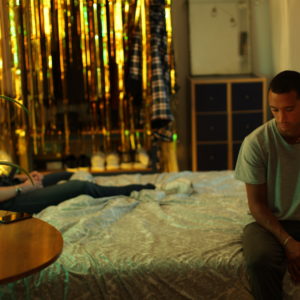 Alison’s book is exceptional and taken Disability and Film Studies to the next level – superseding anything previously written (as Mat rightly states above). Hopefully this will be the book that crosses the wall that blocks most film studies text books on issue of difference / otherness ignore disability. I recommend getting a copy one way or another. A truly significant moment is film studies and disability studies. I, myself, could not be more pleased it is Alison who has done this. Great stuff.

Thank you so much Paul, and Mat of course!

Thanks for that reivw Matt, anyone interested come along and see our feature documentary The Social Model at Together Film Festival on 7th December, in which we mention the very same Stuck on You!