Dr Alison Wilde explores the impairment and disability-based narratives in a ‘disability film’ she can finally recommend. Finding Dory offers the Disney-Pixar package but rolls with the punches while ultimately providing a reassuring message for children about the possibilities life presents. Have you seen her? poster. Image © Pixar

I took my four year-old grand-daughter to see Finding Dory directed by Andrew Stanton for Pixar – she was of course, a feeble excuse to see the film. She was completely absorbed in it. It was a film full of humour, although she didn’t laugh as loudly and as frequently as she did at the scatological visual jokes and language of the BFG. Predictably, Pixar excelled in their creation of art which has content designed for adults (including references to ‘grown-up’ films), whilst appealing to children on other levels. Tilda questioned my laughter on a few of these occasions, entering an age group where she is becoming increasingly curious about other people’s responses which don’t fit with her own understanding.

This film was ‘a blessing and a curse’ in its occasional use of text to understand the story; hence I found myself reading out narrative signposts such as the signs Dory was following to reach her destination, but then again, the inclusion of some textual information may have increased Tilda’s desire for reading fluency. It also provided basic information to the audience about ‘fun facts’ on fish. This was perfect viewing then for a four year-old, but I’d recommend it to everyone.

There are some givens with Pixar film – one of these is that you will expect and get a beautiful aesthetic experience. This didn’t disappoint, particularly if you like fish. In an odd twist of synchronicity, I saw Tarkovsky’s Solaris (1972) the same week and some of the animation of the sea in Finding Dory reminded me of the quiet beauty of the slow shots of flowing reeds in the opening and closing sequences of Solaris. The reeds, and other images of ‘nature’, were memorable aspects of both films and arguably fulfilled similar purposes for the viewer, especially in the treatment of nature as a ‘comfort zone’ from emotional pain, and as a contrast to other rhythms of the film.

Before the release of film, I did research with thirteen-year olds, which involved watching and discussing Finding Nemo. Most of these young people had lost count of how many times they had seen the film before, and all of them thought a sequel was long overdue, but few had considered Finding Nemo to be about disability. A quick reminder; Nemo has a smaller right fin, no surviving siblings and an over-protective father, Marlin, and gets lost, thereby meeting a key character, Gill, a captive of a fish tank in a dentist’s surgery.

Gill is portrayed initially as a villain, perhaps the Pixar equivalent of a (disabled) James Bond villain, replete with scars and a deeply cynical attitude but plays a central role in aiding Nemo in claiming a more independent, fearless identity before becoming reconciled with his father. Gill teaches him about the strength and benefits of collective identity and solidarity with other fish – as part of their bid to escape captivity. And, of course, his travelling companion was the inimitable Dory (played by Ellen Degeneres), star (fish) of this film, a female whose personality is characterised by trust, warmth and loyalty when she can remember who she or anyone else is, due to her ‘short-term memory’ difficulties (cause unknown). Unlike Finding Nemo, it is highly unlikely that a film viewer will leave Finding Dory without thinking about disability, especially as the whole film is premised on Dory’s impairment – writ large.

Like the Toy Story trilogy, Finding Nemo and Dory seem to have difficult life issues at their core and, in that sense, Finding Dory is a reprise of themes of family, home and parent/child relationships – almost a treatise on how to care for others in ways that meet their real needs. The impairment and disability-based narratives are there in both Finding films, most obviously in the case of Dory. Most of these themes are revisited and elaborated further in a story which focusses on Dory’s gradual recognition of her own value; almost a coming of age story for Dory – a rare female disabled protagonist. Disabled characters abound in this film. Again we have the cynical, potentially villainous, figure, this time in the shape of Hank (played by Ed O’Neill), an octopus, or septopus as Dory calls him, due to his loss of a tentacle – again this figure is as essential in the development of Dory’s growing sense of agency as Gill was in Nemo’s.

Two of my favourite characters were Destiny (a whale shark, played by Caitlin Olson) and Bailey (a beluga whale played by Ty Burrel); these characters and their supposed impairments were used in an expert manner, first to create slapstick humour, then to illustrate the personalities of both characters, before the story turns to show us the immense value of their talents, including Bailey’s skills in echolation (biosonar) essential to the assistance provided to Dory and other characters in facing unsurmountable difficulties. With these and other characters, the story subtly but convincingly reveals how most of the barriers faced by these animals were externally imposed on them – indeed the whales find their ‘impairments’ only result in difficulties when they are in captivity. If we do fail to see these themes, the mantra of ‘Rescue, Rehabilitate, Release’ (throughout the film) must surely raise questions about ‘care’ ‘protection’, freedom and agency, even for four year-old viewers. Tilda was chanting ‘Release, Release, Release’, along with many of the fish, by the end of the film.

However, David Chen and Alice Wong (Disability Visibility Project) have both demonstrated that there are elements of Finding Dory which are questionable in the narratives of the film; these are the characters of Becky the loon and Gerard the seal. As the main non-speaking characters in this film, Becky and Gerard are treated as ‘figures of fun’ by some of the other animals – Marlin distrusts Becky’s competence in providing crucial assistance to Nemo and himself, and Gerard’s main role seems to be as the butt of the joke for the other seals’ bullying. It is also a worry to me that these characters are implicitly (if invisibly) defined by their non-speaking status, amongst more the more multi-dimensional personalities of the other main characters. And it continues to worry me that this may compound the disregard that most cultures have for people with limited or no communication skills. This seems especially pertinent here, in a film which seems consciously designed to make us rethink our everyday ideas of difference.

The exclusion of disabled people who are unable to communicate for themselves is often neglected, even if within disability arts and disability studies – a regrettable consequence of movements which struggle to transcend the formidable barriers facing us and the silencing of voices which attempt to speak for us. I am ambivalent about this however, as these sub-plots also allow us to see the bullying which occurs for many disabled people, particularly those with least agency; arguably a necessary feature in cultural representations which challenge stereotypes.

I cried in a part of this film, at a moment which had deep resonance for me; it moved me immensely. I won’t tell you why as I have taken great care to avoid spoilers here as this is film which could easily be ruined by prior knowledge of the plot. However, for those of us who need trigger warnings for feelings of unbearable loss and those who may struggle to retain faith amongst the depths of such sadness, this is likely to make you cry. For me it was cathartic, a feeling which put me in mind of Michael Rosen’s Sad book, one of my favourite books. Unlike Rosen’s book, this is likely to leave you with feelings of possibility and joy, if you enjoy a little schmaltz. Finding Dory is, above all, celebration of disabled identities, interdependency, collective endeavour, love, care and infinite possibilities – and it left me wanting to become vegan. 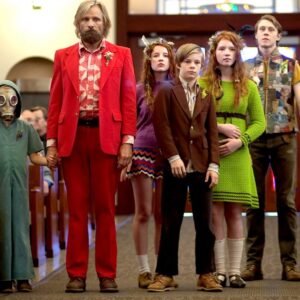 The recent US film release Captain Fantastic is an ‘off-grid family drama’ set in a remote Pacific Northwest forest. In a heated discussion of tropes around diversity, disability and the family, Deborah Williams and Alison Wilde go head to head in a conversation that points to the poignancy as well as the flaws within Matt ...