For All the Women Who Thought They Were Mad, written by Zawe Ashton examines ‘the myriad of forces that collide and conspire against black women living in contemporary Britain today’. It plays Hackney Showroom’s pop-up theatre residency at Stoke Newington Town Hall, London 14 October – 9 November. Review by Omikemi. 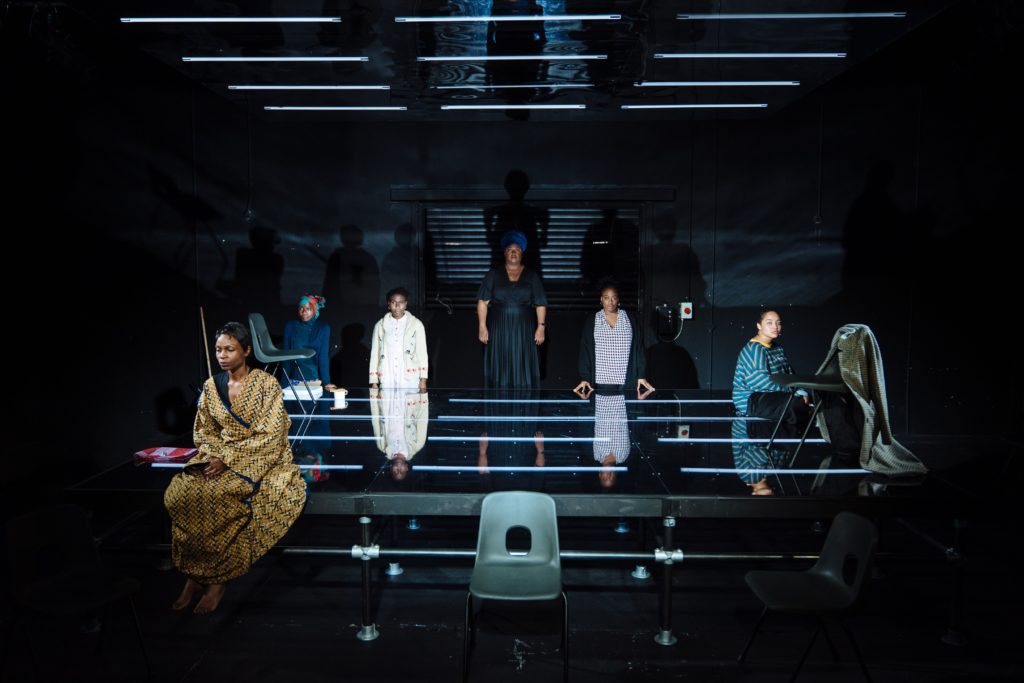 For All the Women Who Thought They Were Mad is timely, ambitious witnessing of black women’s mental health experience. It is the second play by Hackney-born Zawe Ashton, known for her acting, in Betrayal, Fresh Meat and docu-drama Dreams of Life. The play is centred around the suicide of Joy (Mina Andala), a forty-something African-heritage woman working for a callous corporation, desperate for a promotion, and overdue a visit ‘home’. It touches on topics such as post-partum depression, trans-generational grief, single parent-hood and colonialism.

Ashton’s strength as a writer is evident, the adept use of refrains, repetition and amplification of symbols – shoes, water, ginger-root – create a haunting effect found in poetic forms such as sestinas and pantoums. “Some of us will sink in the upstream”, “laughing butterflies”, “hair like lightning rods” are just a few instances of the poetic language, which produces an ethereal atmosphere and brilliant depiction of the altered perception that can occur while experiencing mental illness. The play is at its best in these moments, when Ashton’s writing borders on magical realism.

The story’s engine is a chorus of five women spanning generations  (Jumoké Fashola, Janet Kumah, Layo-Christina Akinlude, Rae Ann Quayle and Jennifer Dixon) using call and response to re-tell significant moments of Joy’s disintegration, attempt intervention and muse on her predicament. This provides momentum and a stunning choral effect that is simultaneously engaging and confusing.

At times I was unsure whether the women were in dialogue or disjointed monologue and their shifting from present-day characters to people from the past is not always apparent. In chasing the narrative, words were missed, and most importantly, voices lost. The refrain “we must tell” at the beginning of the play indicated the voices of these women being heard was a central motivation for Ashton, but this was not always achieved. I sensed fewer actors doing more would have created a more cogent performance. 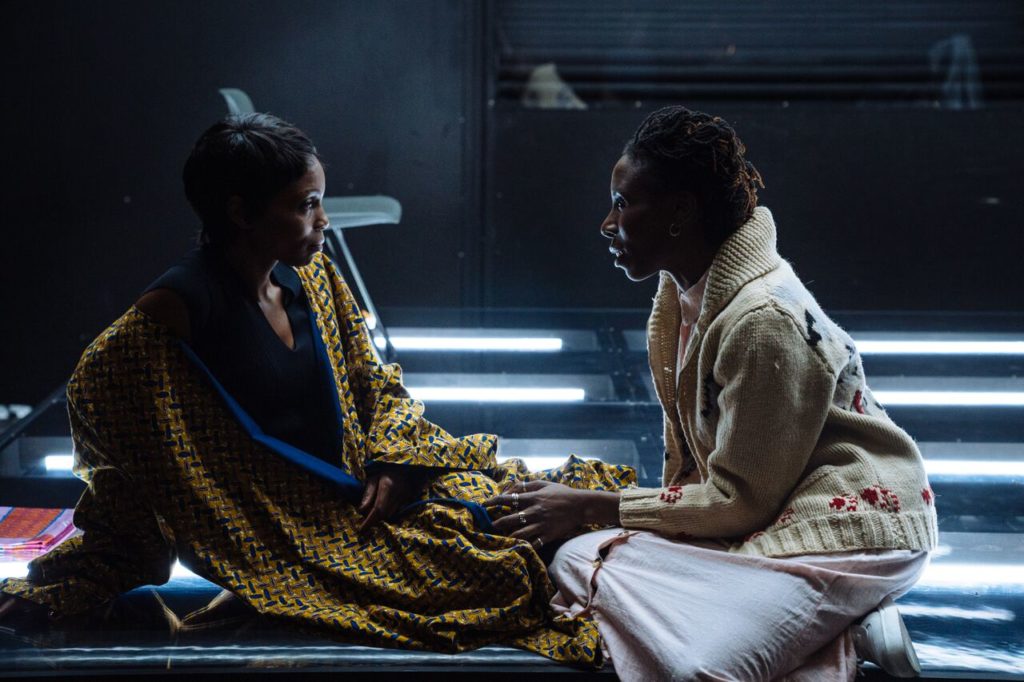 For All the Women Who Thought they Were Mad. Mina Andala (Joy) and Janet Kumah (Rose). Photograph: Helen Murray

It felt awkward and problematic to find me and a friend were two of too-few black people in the audience (that evening) for a play that clearly speaks to black female experience. I considered this might be connected to the location of the play, a nice enough, pop-up theatre space in Stoke Newington Town Hall with poor acoustics and an accessible ramp like a poorly put together Scalextric track.

“Never let them see you suffer…we keep our hardships, there are many that would feed off it”, Joy’s mother (Jumoké Fashola) warns. Apart from potentially reinforcing the invulnerable black woman stereotype, the line pointed towards the need for more reflection on, how as black writers and theatre-makers we can share work that has cultural resonance with black audiences without it potentially resulting in (predominantly) white audiences consuming ‘black pain’ narratives. I wondered what Ashton would have thought about this

The most compelling aspect of the play is where it points to systemic factors impacting black women’s mental health. The male, pale and stale corporate boss (Michael Fitzgerald) who makes constant reference to black women wearing ‘fat’ things; ‘smelling of coconut oil’, and shows disdain at Joy wearing traditional cloth for mourning, is a perfect embodiment of the daily micro-aggressions and psychically hostile work environments that characterise the lived experiences of many black women in present-day Britain. 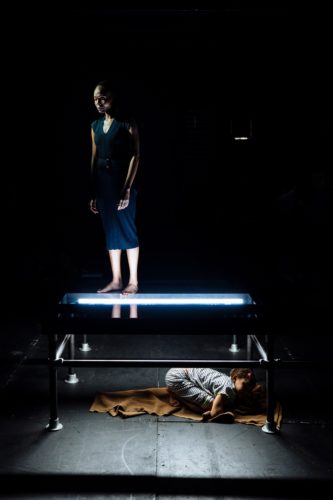 for all the women who thought the were Mad. Mina Andala (Joy) & Chiamara Nwosu (Nambi). Photograph: Helen Murray

Echoes and repetitions call in the long-term and trans-generational impact patriarchal capitalism has had on black female soma and psyche, and a pertinent parallel is drawn between now and then – black women jumping from ships, and a black woman jumping from the fourteenth floor of a corporate building.

“The need to bury this grief”, allusions to an ‘eternal heaviness’ and references to ‘traditional’ medicine calls in a re-think of what a mental health crisis is, and highlights the pathologization of African diasporic medicinal processes and practices. The acknowledgement of mental health being treated and perceived differently in other cultural contexts felt crucial to the play.

Yet there was a hankering after a utopian abstract elsewhere called ‘back home’ interwoven with lines like “medicine from the ground is best” and “it’s these pills that make you sick”, that produced a rhetoric polarising western and ‘traditional’ medicine, which I found unrealistic, ableist and veering towards irresponsible.

Many black women navigate ancestral callings, psychic shifts, mental health crisis, through engaging healing modalities ranging from anti-depressants, ancestral spiritual systems, psychotherapy and entheogens. I was left wondering about the message this gave to black women using medicines and modalities that are not ‘traditional’.

The play is a beautifully written and bold attempt to capture an experience that is very complex – broad strokes, as opposed to nuances, are its strength. What it does best is bear witness. I hear Ashton saying, I see you, and in doing so she gives voice to all of the women, some of us ‘mad’, all of us brave.

More information about For All the Women Who Thought They Were Mad.