Freaks: You’re One of Us is a German Netflix film directed by Felix Binder, which offers a modern retelling of Tod Browning’s controversial 1932 Freaks. Review by Katie Driscoll 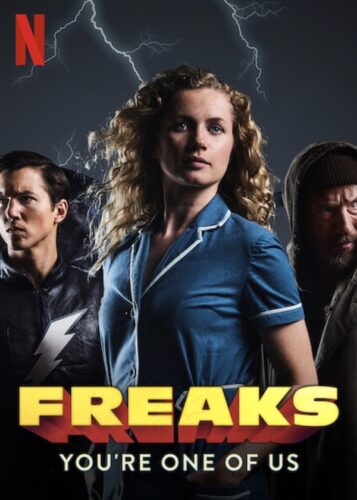 Cornelia Gröschel, Wotan Wilke Möhring, and Tim Oliver Schultz in Freaks: You’re One of Us (2020).

Freaks: You’re One of Us is like Browning’s original in some ways but then also, not at all. The film centres on a fry cook, albeit one who doesn’t run away to join a circus; she isn’t a gold digger but is a ‘freak’ herself, and the identification is altered, the gaze turned inward. We are not on the outside looking in, but the ‘freaks’ are instead superheroes, rather than monsters, with a score akin to the retro synths of David Mitchell’s ‘It Follows’ (2014).

Representations of disability in cinema have always been contentious, with physically and mentally disabled people dehumanised, turned into the ‘other’, made into monsters. The title of the film is a direct reference to an iconic scene in the Browning film, the incantation of ‘One of Us’ – ‘us’ alluding to the downbeat and neglected, those ignored by conventional society due to physical or mental disability.

Wendy (Cornelia Gröschel) takes tiny blue pills given to her by her psychiatrist Dr Stern (Nina Kunzendorf), and is approached by a homeless man one evening, Marek (Wotan Wilke Möhring). Our ‘god in the machine’, Marek proceeds to give Wendy an ominous warning about how the pills dampen her fear and sadness, but also her power. In a somewhat heavy-handed manner he tells her that the true self is the depressed, mentally ill self (a trope that feeds into the ‘artist as crazy genius’ myth, too).

The idea that the world of pharmaceuticals is sometimes a band-aid approach to our dysfunctional brains is one worth exploring, although perhaps is a little irresponsible? Is the power in her illness? Is everyone else crazy? Or is she?

A paean to the outsider, the tale of Wendy and Marek becoming superheroes of the comic book variety, helping those in their town, but also helping themselves, would have been told better with Ryan Murphy’s (American Horror Story, Ratched) camp sensibilities to hand, but the comparison to comic books is a visually interesting one. However, Wendy’s acceptance of her powers and subsequent bonding with her co-worker Elmar (Tim Oliver Schultz) over his medication lacks any chemistry or character development.

Without any reason why she would suddenly turn up at night, there she is in his bedroom, to deliver the words of their powers like a prophet. The films’ play at comedy is awkward, a montage of Wendy’s newfound strength and confidence utilised for such banal tasks as moving her car or helping her son defeat his bullies. However the film does pose some interesting questions: If mental illness weren’t so stigmatised: might we get the promotions, earn the respect of those around us for being able to cope with such adversity?

Can we view our disabilities as a strength instead of a weakness? If only not needing medication and embracing mental illness was enough to make you into a superhero who can function. ‘Freaks: One of Us’ proves itself as light fare which doesn’t provide any depth or insight into how it feels to embrace yourself. It instead appears to be trying too hard to be a genre film with a social message tacked on, not blending together well at all, leaving an interesting idea to wilt.

Freaks: One of Us is currently available on Netflix