gobscure’s show provoked to madness by the brutality ov wealth had an outing at The Place Theatre, Bedford on 22 May. Colin Hambrook was there at this seminal social distanced outdoor event. 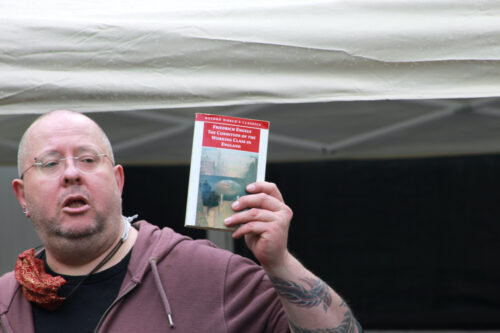 gobscure brandishes a copy of Engels’ The Condition of the Working Class in England (1845). Image Issy Malt, The Place, Bedford

A mix of personal storytelling punctuated with historical anecdotes, humour and a powerful provocation based around an approach to theatre enshrined by Augusto Boal, gobscure’s show is intelligent, unsettling and entertaining in equal measure.

As much as anything ‘provoked to madness…’ is a show about ideas and central to that is a critique of theatre, taking it down from its lofty heights as only being relevant to an elite. Augusto Boal’s Theatre of the Oppressed sits at the heart of gobscure’s performance. They want us to think about freedom as a frame for our perception of things, using performance to reaffirm some basic human values along the way.

gobscure becomes animated when engaging with word-play – and one of the first warm-up exercises they introduce their audience to, is a form of gentle participation. In collaboration with Lindsay Nicholson, Co Artistic Director of Workie Ticket Theatre, they tell the story of Boal and his idea of the ‘spect-actor’ – a term invented to describe the dual role of those involved in the process of theatre as both spectator and actor; observing and creating dramatic meaning and action through performance.

We were asked to expand our horizons through a simple practical exercise before gobscure opened us up to getting to know a little of the stories held by the audience members. The process gobscure takes us through gives their audience a chance to tell their truths; to become ‘spect-actor’ as the third wall between actor and audience is casually removed. 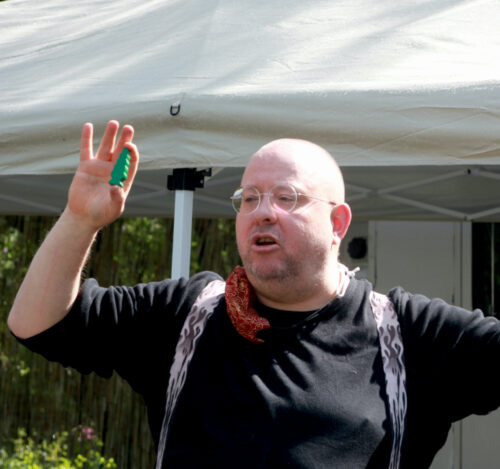 Humour is the glue that holds this show together and here they provide a brilliant opportunity to plunge their audience into raucous acknowledgement of various elements of what it is to be human.

gobscure’s talent lies in their strength in telling difficult stories about abuses of power, inequality and resistance in ways that allow us to examine our own relationship to privilege and marginalisation but always with some focus on the absurd. If there is one takeaway from gobscure’s blend of engagement with their audience it is that however difficult life can get there is a freedom in humour, be it ever so dark at times.

There were a number of audience members present at The Place who had come from the Museum of Homelessness and one of the things that came out in the conversations that maybe should not be such a surprise is that over a quarter of the 450 or so disabled artists applying to Unlimited at the end of last year have a lived experience of homelessness.

Art is a way out of oppressive situations for so many of us. One of the central stories to ‘provoked to madness…’ was that of a support worker who questioned why as a homeless person gobscure would need books: the assumption being that access to culture would be the last thing they would want or need on the streets. Their response was to take inspiration from Engels The Condition of the Working Class in England (1845) – the book that ‘provoked to madness…’ takes its name from and one that changed gobscure’s life.

Another key theme within the show is the idea by American cognitive linguist and philosopher George Lakoff – that of reframing a narrative as a way of avoiding the trap of collusion with unhelpful ideologies or perceptions by trying to argue against them.

Illustrating this idea with the kind of dark humour that runs through the performance, gobscure tells us about their strong connection to the work of Hieronymous Bosch. They pull out a toy plastic copy of the Prince of Hell – a figure from The Garden of Earthly Delights of a man-eating bird-headed monster feasting on human corpses, which are excreted through a cavity below the object. Bosch’s artwork illustrates his visions and nearly 600 years on, we can relate to the messages from all that time ago within our history. We can hear Bosch’s voice as a message for the future. One of the current narratives that gobsure reframes is the notion of red tape as a way of frustrating common sense. They tell us that Hertogenbosch – Bosch’s birthplace was also the birthplace of ‘red tape’ – after the city burnt down in 1463. provoked to madness by the brutality ov wealth has many take-home messages, but a key memo to bear in mind is that contrary to popular belief, red tape saves lives.

As gobscure says in the zine accompanying the show “we’re all born with a voice, mostly it gets stolen, silenced or denied. At most we’re permitted to speak on certain things in small ways. Our first battle is regaining voice.” Disabled people and in fact anyone living on the margins feels that sense of our voice being taken from us. It is a commonality that sits at the heart of our existence. provoked to madness by the brutality ov wealth admonishes us to look for alternative empowering narratives and to regain our voice and to tell different, better stories.

provoked to madness by the brutality ov wealth is supported as part of BOOST: the Third Angel Mentoring Scheme in association with Sheffield Theatres.