Aruna and the Raging Sun was a large-scale outdoor performance in Chennai, India produced in partnership with Graeae, La Fura dels Baus, Prakriti Foundation and local partners which took place on 24 February. Director Amit Sharma spoke to DAO about this hugely ambitious project. Aruna and the Raging Sun

What happens when you take one of the leading disabled-led theatre companies from the UK, mix them with a respected contemporary urban company from Barcelona, ship them both over to India to work with a host of local partners and throw in 100 disabled performers and an 8-metre puppet? A bloody great spectacle and some shattered barriers! No surprise then that the project has its roots in the 2012 Cultural Olympiad extravaganza, Prometheus Awakes. Graeae’s Amit Sharma explains:

“Aruna was part of Re:Imagine India and UK-India Year of Culture, both events supported by Arts Council and British Council. I wanted to do something really ambitious not just for Chennai but for Graeae too. We’d worked with La Fura before as part of the Cultural Olympiad in 2012 (Prometheus Awakes) and we always wanted to work together again. The lead producer had always wanted to do a production in India and I have my own personal connection to the country, so I’m extremely delighted to say that our dream became a reality.

It’s also really important to highlight the wonderful organisations that were based in Chennai who we couldn’t have done without: Prakriti Foundation, Vidya Sagar, Krupa, DCF, Artspire, Wheelchair Basketball Federation, MGR Janaki College the list goes on!” The production is based on the Indian legend of Aruna, who is the personification of the sun’s glow. The intention was to reimagine this old myth for a contemporary audience, told through a lens of disability. Sharma expands:

“I was looking for a story that was from Indian culture that was well known. Bala (our writer) rattled off a list of stories from the Puranas and we landed on Aruna. There were some elements to it that felt dated so we reimagined it but keeping the idea that Aruna was a disabled superhero. We also felt a real affinity with the theme of climate change so that the production wasn’t just talking about disability.

We then had to make sure we had the right apparatus to fit the storyline which was brilliantly helped by the video designer Adrita Das (whose work is stunning) and beautiful music from Lewis Gibson. We had blind and visually impaired signers who didn’t want to perform but wanted to be involved. The lyrics were spoken in Tamil and had an ethereal quality particularly representing Mother Earth. To frame the whole thing I found a quote from an Indian text called the Katha Upanishad which read ‘Look back how it was with those who came before, look forward how it will be with those who come hereafter’.” Aerial performers in Aruna and the Raging Sun

As with any project that involves so many disabled performers with a range of impairments, access is always tricky to get right. But as this anecdote shows sometimes belief and creative thinking can trump traditional access provision:

“What was incredibly unique about the production was that everyone got on with it. That’s not to say we didn’t have the right level of support. More that the opportunity to perform was liberating. There was one moment where we had a bunch of D/deaf volunteers from a bank who were following cues from their sign language interpreter when they were dancing. They stopped looking out and performing to the audience, they stopped working together and they stopped trusting themselves.

One idea was to give status to the interpreter and make him a maestro or a conductor of an audience. I wasn’t really comfortable with that idea and I spoke to the D/deaf performers and told them to believe they knew the choreography. This caused a slight panic! After a little time of cajoling we rehearsed it without the interpreter and they were bang on. The elation they felt was immense.”

Working across cultures often throws up interesting debates about language, perception and the framing of disability. Despite differences of opinion Sharma is adamant that India is forging its own path in disability representation:

“I can’t tell you how progressive India is as a country. There’s a programme called ‘Accessible India’ which is beginning to challenge the old and bring in the new. The press loved the fact that such a big spectacle had disability at its core. One thing that I hadn’t quite anticipated was terms of language. Using ‘disabled’ and D/deaf’ are quite regular and standard here but in India some found these those words offensive and preferred ‘Differently Abled’ and ‘Hard of hearing’.

We had a chat at Graeae about it and my feeling was that we need to respect the culture we’re going into as well as explaining why we’re using the language we are. It did get me thinking about whether the language we’re using is progressive as well as how confusing it must be for anyone who is coming to the idea of self-identification, whether disabled or not. Language evolves as do ideas – Has the disability community stopped or even shut down the conversation? I don’t know.” Huge crowds gather for Aruna and the Raging Sun

The press may have responded well to Aruna and the Raging Sun, but it seems the best reaction of all was from the live audience. Sharma recalls with glee:

“I absolutely love projects like these because it’s such a unique event where D/deaf and disabled people can show off their skills. The key to all of this is that the work isn’t hidden away both for the performers and the audiences. By the end the audiences wanted their photos taken with the performers. It was like a pitch invasion when a cup upset happens. An outpouring of emotion for everyone involved.”

Sharma reflects on what impact the project has had, beyond just the spectacle of the performance:

“We’ve been working in India for the last two years and so we’ve shown you can work with D/deaf and disabled performers, particularly in an outdoor setting. We’re in discussions with the British Council to go back and reflect on Aruna and keep the momentum to push change. I’d love for us to go to other parts of the country with this production as India is vast and there’s nothing like landing in a place and doing something that has a wow factor and challenges people’s ideas of what D/deaf and disabled people can do. It’s an exciting time for India and it’s important everyone can fully participate.” 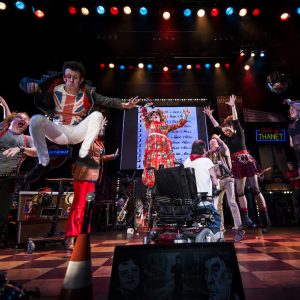 Four Directors Give Four Reasons to be Graeae

To mark the launch of Graeae’s new book Reasons to Be Graeae which charts the history of the company which was founded in the early 1980s, Natasha Sutton Williams talked to four Graeae directors whose work has spanned the decades. They give four major insights into what makes Graeae so unique and daring as a ... 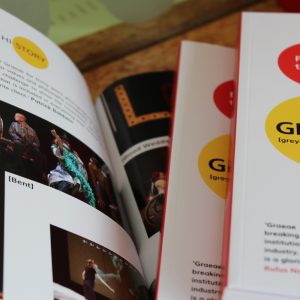 Reasons to be Graeae