Angela Edmonds talks with live performance artist Noemi Lakmaier about her 2016 performance ‘Cherophobia’ and ‘The Task of Containing’, commissioned by Shape Arts for Tate Exchange 2018.

Angela Edmonds: Hello Noemi, good to talk with you. In your performance work you use your physical body in relation to certain objects in time and space. A perfect example is your 2016 performance ‘Cherophobia’ in which over a 48 hour period you were eventually elevated by 20,000 helium filled balloons. ‘Cherophobia’ which means an aversion to happiness certainly seems an appropriate title. Colourful balloons are usually celebratory but here they became almost like instruments of torture until the final moments?

Noemi Lakmaier: Tension is important in my work, including ‘Cherophobia’. I’m interested in the contrasts – for instance the celebratory and the tortuous as you put it. I don’t think one replaces the other though, both attributes and associations remain present at the same time. 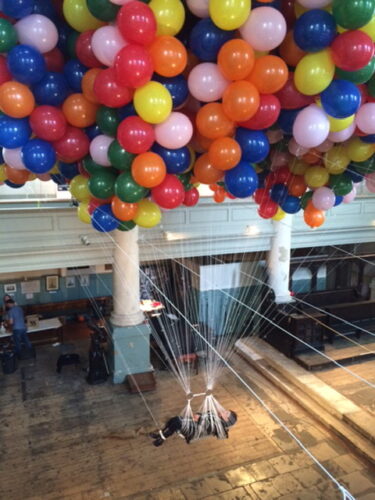 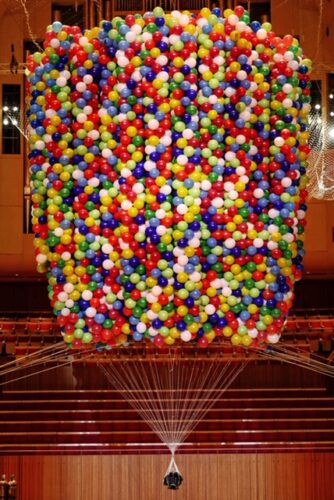 A.E I like the way you see the contrasts as part of a whole, just like life. The performance struck me as both a crucifixion and, when you were finally lifted into the air, a resurrection. The fact that it took place in a church really reinforced that for me. It looked very ritualistic and sacrificial.

N.L Yes, the fact that it took place in a church certainly reinforces the religious connotations. I’ve since performed it at a Sydney Opera House and in a theatre in Berlin. I think it felt a bit different in those places.

N.L Interesting point. I think I mean passive in the sense of uninvolved in and powerless over the events in the performance. Sure, you have thoughts and feelings in response to watching but they are intimately yours. You are a voyeur in that sense – you watch and you have an emotional/ physical reaction.

A.E Yes that’s true. Can I ask you about the restraint that you experienced whilst tied to the hoist? It looked like an extraordinary act of endurance and the ropes tied around you looked like a type of bondage. I’m aware that at one point you asked to be released from the hoist before bravely returning to it until you were successfully lifted into the air by the balloons.

N.L Yes, we had a bit of a medical situation which meant we had to interrupt… Not sure about ‘bravely’, it’s what I wanted.

A.E It looked extremely uncomfortable. One aspect that struck me, being aware that you are a wheelchair user, was the gravity defying aspect of the performance. Like a subliminal desire. The dream of being gravity free and elevated.

N.L In what way? Is walking less subject to gravity than using a wheelchair?

A.E That’s a good observation. It was just a thought.

N.L Well, most walkers are higher up than people sitting down …

N.L The voyeur is allowed to experience what they experience.

A.E Oh dear. That hadn’t occurred to me. You have said that your work is influenced by Heidegger, who wrote about being and time, something he called Dasein or ‘being there’. I imagine that you felt that very powerfully during the performance – this idea of ‘being in the world’.

N.L Heidegger’s philosophy is really complex and I wouldn’t pretend to understand all of it, yet some of his ideas have become extremely important to me as an artist, a therapist and a person. The way I understand it ‘Dasein’ and ‘being in the world’ are really just more accurately descriptive and anti-Cartesian ways of saying ‘person’ and ‘being human’. They are an attempt at describing our always-already-connectedness. We don’t exist as separate self-contained entities that happen to float around together and sometimes bump into each other, but we are in the world and always in context – ‘thrown’ as he puts it.

A.E Yes and he spoke of being and time, the two coexisting, and I see that very much in the temporality and heightened experience for you during the performance. The work is almost painfully slow to watch.

N.L It is intentionally slow. It is also always the viewer’s choice how long they want to engage with it. 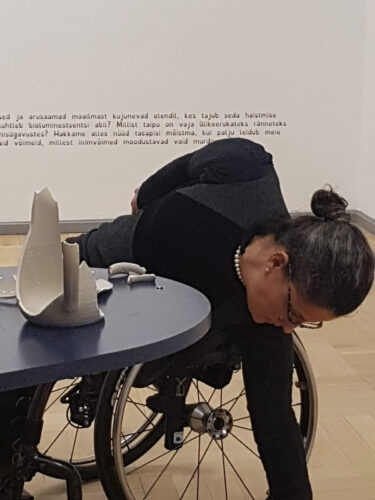 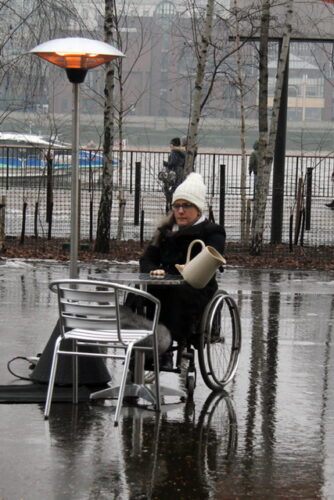 A.E Another of your performances also employs gravity and time. That is ‘The Task of Containing’, in which you repeatedly push a jug to the edge of a table until it falls to the ground and smashes, and you then repeatedly retrieve all the fragments and glue them back together in an endless cycle. It was quite tortuous to watch.

A.E It looked so cold and bleak. The weather really added to that feeling. Was there a reason that you did it outdoors?

N.L It was very cold the first time, true, but that was a bit of an accident. It was the end of March and we hadn’t expected it to be quite so cold. It was the Beast from the East.

N.L I was commissioned by Tate and Shape to do a piece outside of Tate Modern, so that’s why it was originally outdoors. I think it works outside. Adds to the absurdity. I subsequently did it inside in a gallery in Tallin in December. That was interesting in its own way.

A.E I see. It certainly worked outside for me. The passers by on the pathway behind you were unaware or impervious to you. That added to the pathos and absurdity. Also this performance was just you alone apart from the person behind the camera.

N.L While I mostly perform alone, I very rarely work independently. What you see is often backed up by a team of my producer, tech, advisors etc.

A.E Indeed that’s true but I suppose they are usually out of sight?

N.L Sometimes, sometimes not. They are very visible in Cherophobia for example. There were about 20 volunteers at a time, about 80 in total, plus my bondage experts, engineer, my producer and nurse.

A.E Task of Containment was a much humbler looking affair, much less of a spectacle.

N.L Task of Containment was certainly simpler, but still took a lot of planning. The sound especially was quite complicated.

A.E Interestingly I saw the original live performance which had only the ambient outdoor sounds. Can you say more about the sound that you added for the subsequent gallery based versions of the work?

N.L In the end I thought the work felt much more influenced by/a comment on Heidegger’s late essay ‘The Thing’, in which he considers object-hood and ‘thing-ness’. He uses a jug as an example. It’s a late essay, when he had become weirdly spiritual. Its quite absurd really. The video part of the performance is the text read out loud. It’s a separate video. It plays while I am performing.

A.E Ah, like a Jug has its jug-ness. It rings a bell now. Like saying objects have their own authenticity? Their own thing?

N.L Yes. I think by continually breaking and glueing together the jug I was destroying/questioning its thing-ness.

A.E Ah, I see. Although I thought the performance worked very well without any accompanying text. I’m aware that Task of Containment was informed by the concept of Sisyphus?

N.L Sort of, because it was commissioned in honour of the 10 year anniversary of the artist Adam Reynolds’s Tate Sisyphus commission and his death.

A.E It also made me think about healing, like the body. It heals but may be left with scars, like mended cracks. Your performances also contain strong elements of endurance and patience and something quite transcendental. What are your thought when you are first thinking about a performance?

N.L To be honest, I don’t really know. It depends on the piece.

A.E That’s the best way. But your thoughts are clearly interesting haha. I think the two Performances that we have talked about trigger many thoughts about what it is to be human, our vulnerabilities and strengths.

A.E But I am a passive observer …