In the first of four articles relating to a partnership between DAO and the Museum of Homelessness (MoH) – ‘& housing contains the word sing …’, associate artist gobscure discusses the shared DNA of homelessness and disability 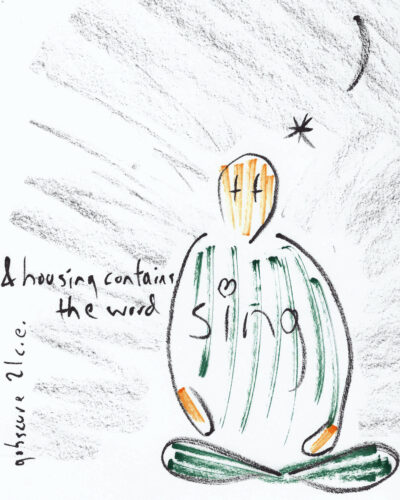 were typing this in our tyneside council flat after midnight, bob dylan singing ‘its not a house … its a home’, that record shop saving us as teen. now violence in our area has left, our yard is become sanctuary, proud of how far we’ve come

in 2018 we became part of catalyst run by Museum of Homelessness (MoH), a small radical charity with a big heart. they campaign creatively for social change, are run by / with folx with lived experiences of homelessness. MoH change who tells stories, how, and they defiantly get folx to listen.

‘only open to people with experience of or currently experiencing homelessness &/or housing inequality. This includes street homelessness, hostels & temporary accommodation … ‘ applications are inaccessible, they fail us. we got in touch saying we’d just had a discussion about gatekeepers with a young campaigning curator who gave their most brilliant michael caine: ‘blow the bloody gates off’; we told how that inspired us as did giving back around issues relating to homelessness and disabilities – mental & physical. we added the narratives broken: britains 6th largest economy in the world (california overtook us at #5, 2018 figures). two-&-a-half-trillion dollars thru these islands annually, why are we fed so many lies about housing being expensive? we want to change the narrative – homes are human rights.

being with others where you don’t have to explain made MoH chosen family. no one mined for inspiring-trauma-porn, ‘things in doorways’ (DON’T DO IT!) remained untweeted, & no-one called out homeless folx for shitting in plastic bags as ‘plastic is baaad’ (you’ve really never shat into a carrier yet? iceland bags are the roomiest with crip-friendly handles for easy-tie. try it.). any funders interested in a creative shithurl olympics, the trebuchet of kaka? we’d love to walk you’s thru it, r&d targets … 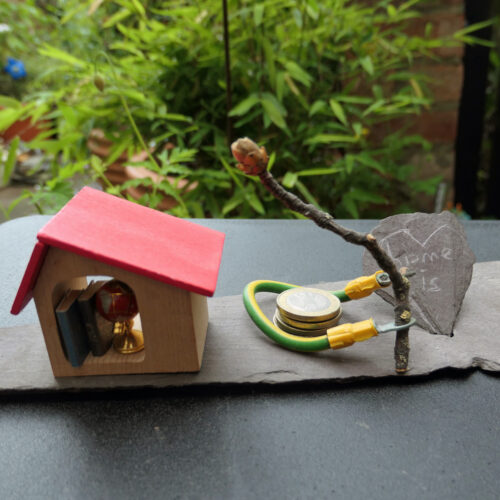 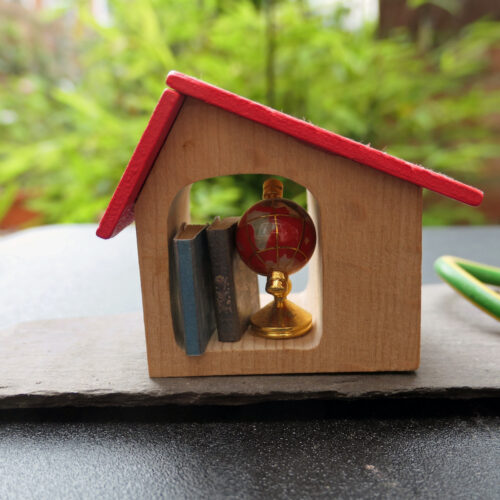 we’d met this countries only homeless people’s professional theatre company Cardboard Citizens over a decade before and were fortunate to even spend a little time with Augusto Boal. Cardboard Citz are leading practitioners of Forum Theatre and Theatre of the Oppressed methodology, amazing gifts for the world by Brazilian theatre director Augusto Boal and much inspired by his friend Paulo Freire. Theatre of the Oppressed includes techniques using performance to explore lived experiences, allowing folx to ‘rewrite’, answer back, offer alternatives, challenge authority, way more … other techniques are ‘invisible’ – taking place in real world settings and allowing political exploration; ‘newspaper’ (widening who tells the news, what is news, how is it interpreted?), or ‘legislative’ (yes laws have changed as a result), others are more therapeutic breaking down the ‘cop in the head’

for e.g. we’d ached to be able to experience Theatre of the Oppressed about the same time as we came across Andrew Vachss writings who saved our life: ‘anybody who has served in combat in any way understands that words are weapons. & i’m in a war. the war hasn’t stopped.’ or more politely : ‘the cultural software is being recoded … watch your language. the words we use actually shape the perception of the matters we discuss, in both conscious & unconscious ways.’ back then we’d only been able to nick one Andrew Vachss book, so had to steal other things in order to buy his books, worth every penny. theres even a childrens book for adults – another chance to get it right. for him survivings happenstance, the trick is transcending – i.e. refusing to imitate the oppressor.

thanks to MoH and DAO (were associate artists with both, muito obrigado) were making a start exploring the shared DNA of homelessness and disabilities. ‘housing contains the word sing’ is a series of articles, artworks and events. this first article is partly about our work. future articles give collective platform to homeless arts (individuals & organisations) & the shared dna with disabilities; they’ll be about the skills of lived experience to reframe narratives & show change is possible; & also about rewriting futures, offering healing possibilities, safer ways to do things. on 17th november housing contains the word sing ends with an online event with our extended fam. hope is a four letter word so come love&rage with us 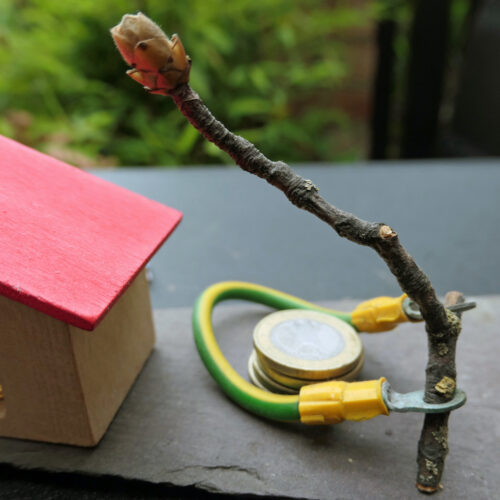 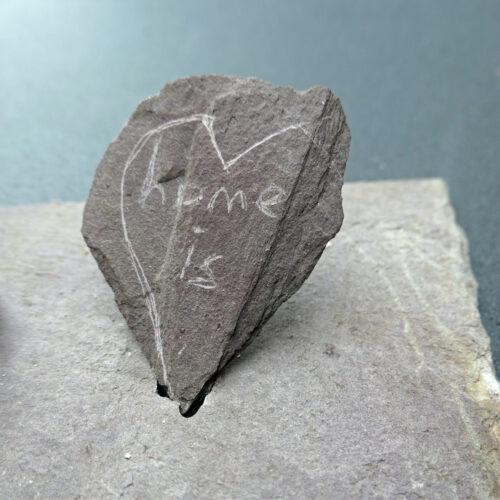 our solo show ‘provoked to madness by the brutality of wealth’ continues touring this autumn. cardboard citz said thats the best title ever for a show. those words are friedrich engels, read by us in translation in a homeless hostel in the early 2000’s. dao said its a show about regaining your voice.

tho an empty (dog) poo bag is one of the shows props, its more about our revenge on a homeless hostel ‘support worker’ who said ‘what do you need books for, yr homeless?’ after our worst sectioning. so we spent 13 years reading, studying for an open university degree, graduating in 2016. were all born with a voice; we’ve all lived and have stories (plural!) to tell yet were almost always silenced. sometimes were permitted a tiny voice but only within carefully controlled circumstances yet having a voice is the most healing thing we know. ‘don’t think of the elephant’ is the book by George Lakoff that energised Bernie Sanders – whoever frames a narrative wins.

don’t push back against the top-down narrative – thats knackering and you will lose by fire-fighting. you want to win the argument? stick to yr principles, pick yr battleground, reframe the narrative. we’ll leave you for now with our poem hope is a four letter word – its from our spoken-word show ‘with added nuts’ & its also in our poetry manuscript ‘my friends are invulnerable’

discharge & this housing association offers support
– we don’t need support, we need place to live
lass homeless under cash-hole begging
sometimes blonde – today her eyes know
the only two still points on this street
our eyes pull each other close, closer

she points up saxon tower of fading stone
– yr headphones, what were you playing?
– clashes straight to hell
– shouted on up yr better than that
at last we break wishing each other
yr better than that the exact same 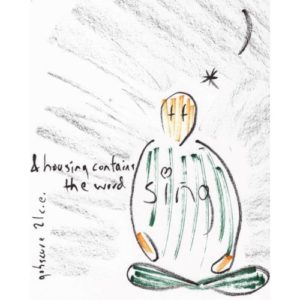 part ov a partnership between DAO & the Museum ov Homelessness (MoH) on the shared DNA ov homelessness & disability – created by associate artist ov both organisations gobscure https://www.youtube.com/watch?v=AvLadZ0mI10 on us : we write as burn, perform - exhibit internationally - make award-winning sound-art as gobscure. we use plural as reflection on our broken-mind. artistic associates ... 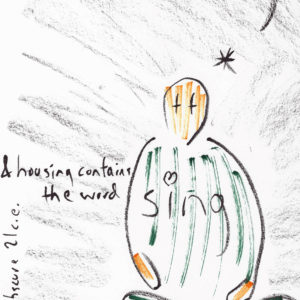 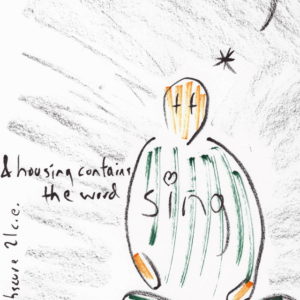 In the third of four articles as part ov a partnership between DAO & the Museum of Homelessness (MoH) on the shared DNA ov homelessness & disability – associate artist gobscure discusses healing&justice with homeless arts organisations. Disability Arts Online · Article 3 Housing Contains The Word Sing Audio as with all our work & work in ...