Tommy The Queer Historian’s How Disabled Are You? places three disabled benefit claimants who have never read a script before onstage, getting them to read out real-life problematic opinions about disabled people. It plays Junkyard Dogs: The Doghouse as part of Brighton Fringe 17 & 18 May. Review by Colin Hambrook. 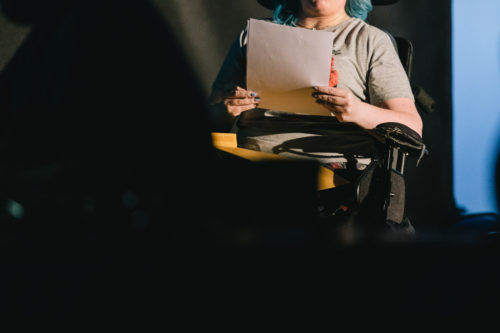 How Disabled Are You? Photograph: Rosie Powell

My guess is that the main problem for the audience of Tommy The Queer Historian’s latest show in the Brighton Fringe is that they won’t necessarily have realised they were witnessing a show that was intended as performance art, rather than theatre. The theatre programme doesn’t make the context clear nor did it give an explanation of the main premise behind the piece.

How Disabled Are You? is deliberately agit-prop. It’s a piece of work clearly born of anger, frustration and the deep sense of betrayal that the disability community feels at its core as a result of the consistent attacks on our lives and welfare. It opens with some of the dreadful statistics projected on an old sheet slung on a washing line across an empty stage. For example, with the introduction of the Personal Independent Payment (PIP) and its questionable reassessment process, 47% of people receiving Disability Living Allowance had their benefits reduced or stop altogether.

As the gutter press persistently stirs up jealousy of the perceived advantages given to disabled people, silently evoking the Nazi-coined notion of disabled people as ‘useless eaters’, is it any wonder that hate crime has increased by 30% in recent years? 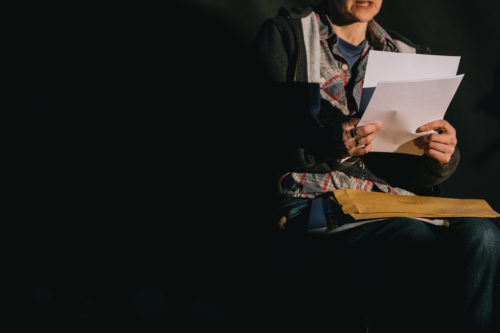 How Disabled Are You? Photograph: Rosie Powell

The inevitability of this was apparent back in 2011 when Nick Watson published his research Bad News for Disabled People: How the Newspapers are Reporting Disability.

The audience surrounds three disabled protagonists who randomly pull scripts from brown envelopes to read from a series of interviews with people who have clearly digested and consumed the lies broadcast by the media. Interestingly, there was a lot of talk about food and television; assumptions that disabled people spend their lives watching daytime TV – in between all the luxury holidays, of course.

I laud Tommy for attempting to bring the reality of disabled people’s lives into the open and to convey something of the resilience that comes from coping with the difficulties brought by impairment and long-term health conditions. We need healthy conversations that spread the word that disability is, more often than not, hidden.

But this show was more about exposing attitudes of ignorance, which we arguably hear more than enough. Does simply putting these in the mouths of disabled people do enough to subvert the narrative? Occasionally, the performers broke ranks and retorted, but I’d have liked to have heard more from them. How did it feel to come out as a disabled person on a stage to a bunch of strangers? What did it mean for them to make visible, what it’s like to live with an invisible condition?

‘How Disabled Are You?’ is a question that historically has been about the divisions within disability communities and the oppressive hierarchy of impairment status that has given fuel to the attacks on welfare. For me, a more interesting question would be ‘Does anyone like to think of themselves as disabled?’ I think it’s important to find ways to talk about disability openly and honestly and to counter the victim narrative that the benefits system imposes on us.

The reality is that disability (as opposed to impairment) is not a binary either/or. Disability is ever in flux and only rears its head at the point of discrimination. The most memorable and shocking moment in the show for me was when one of the performers deviated from the script and talked about himself. He had been confined to his house for a long time until the point where he was able to win a wheelchair in a raffle. Society has finally reached a point where the basic right to movement is dependent on winning a competition. Life and death are increasingly becoming a lottery.

How Disabled Are You is at Junkyard Dogs: The Doghouse, Brighton 17 & 18 May.