How to be a Dyslexic Artist & Other Stories, was a short course for adults exploring their personal experiences of being dyslexic. Devised and delivered by artist Benedict Phillips and a team that included Ros Lehany – a dyslexia/ dyspraxia specialist in a performing arts Higher Education Institute. The following article presents Benedict and Ros’ reflections on the process for making the workshops and exhibition happen. The project took place at The Tetley in Leeds during the summer of 2019, and was on display there from the 17th July until 10th November. 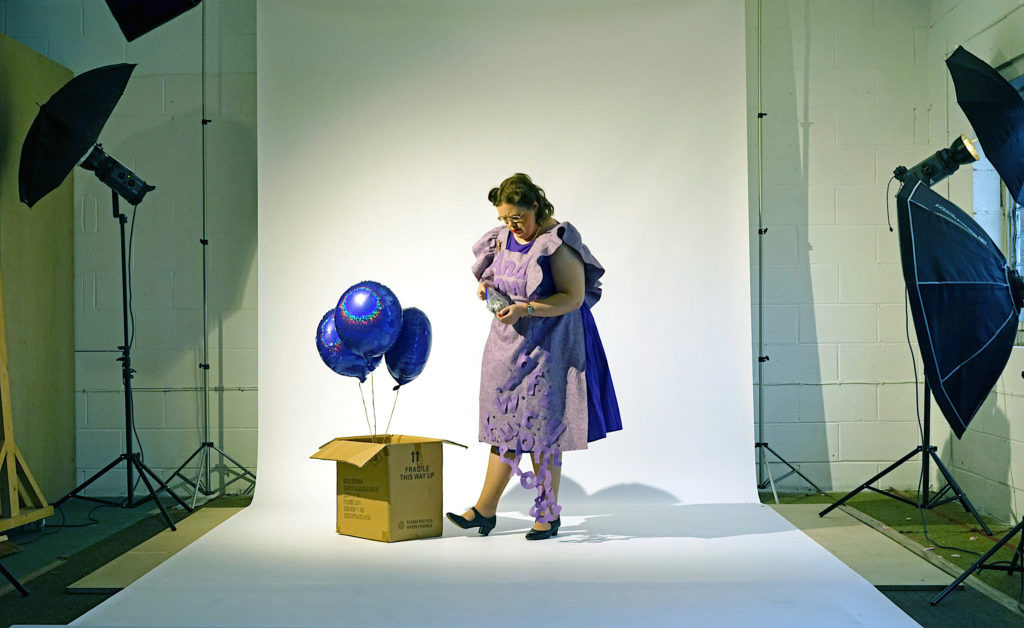 Laura Taylor, after the performance in the studio. Image @ Benedict Phillips 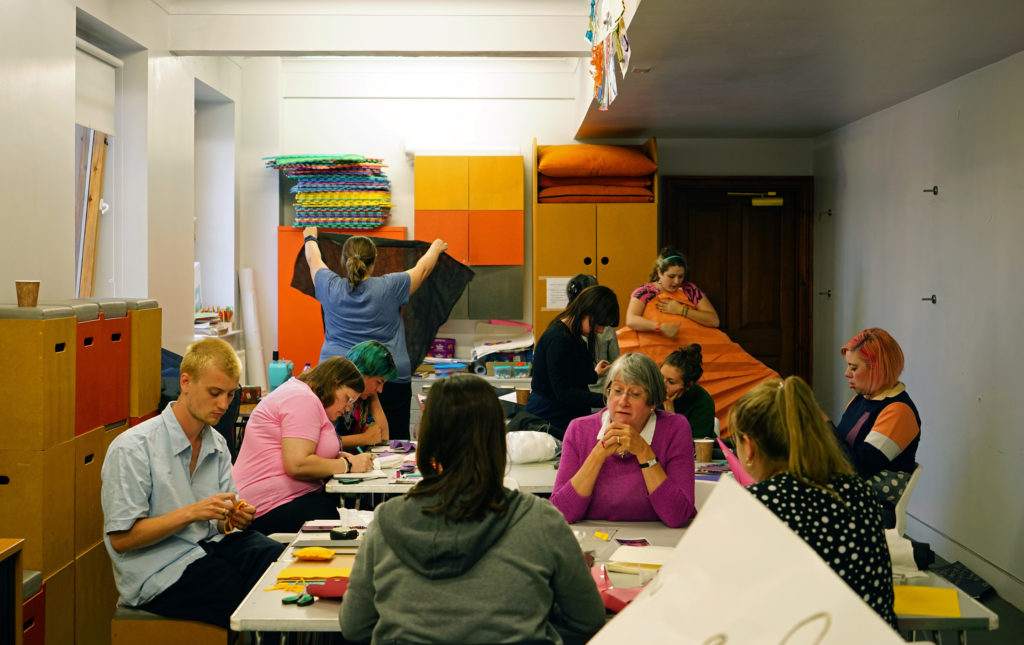 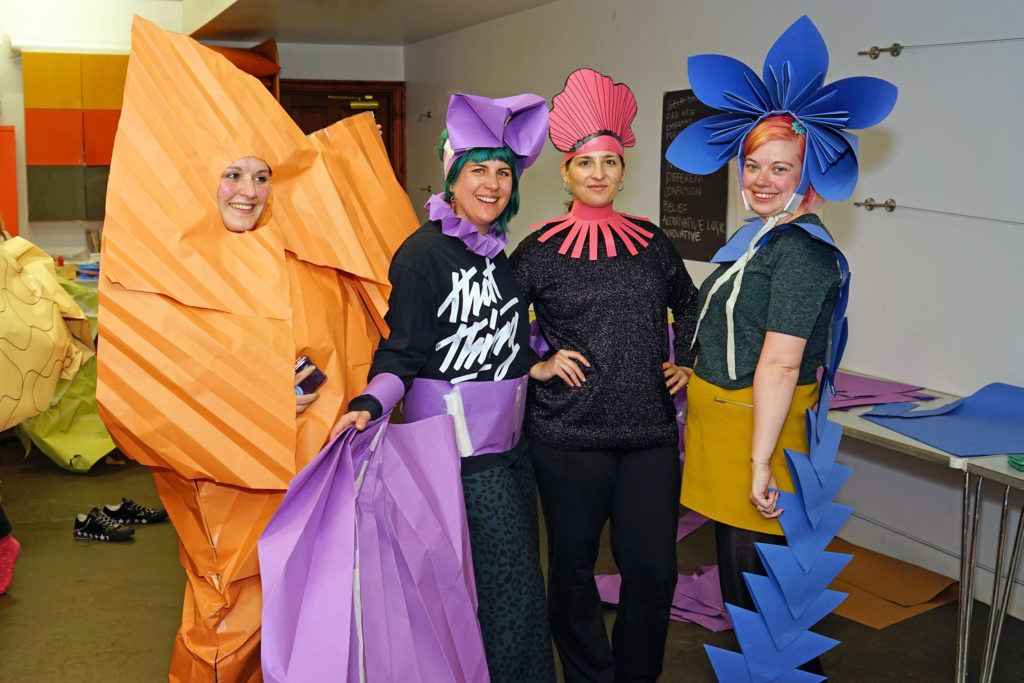 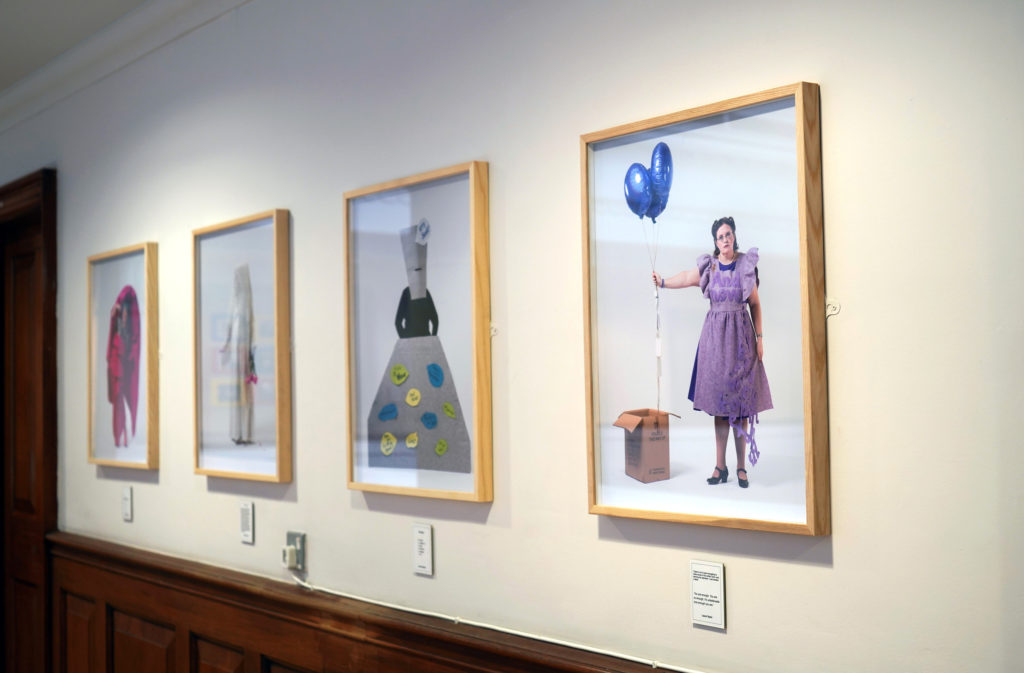 Benedict Phillips gives some background to the project:

If there is one lesson that gets taught again and again when working with a group of individuals to create a collective outcome, it’s that the things you don’t expect and cannot plan for bring a richness, depth and unique character to these creative projects. How to be a Dyslexic Artist & Other Stories, was no exception to this rule.

When I think about dyslexia, I reflect on the fact that society in general perceives it is a kind of disease, one that is prevalent in 5% to 10% of children and which makes them a bit ‘stupid’ in their reading and writing. This is not what dyslexia is. Firstly, you are dyslexic, you don’t have it, you don’t catch it and to be honest it isn’t really much to do with reading and writing, that’s just the space where it becomes visible within our society. The age thing is important too, from my perspective there is an exploitative commercial operation in place to ‘support’ dyslexic children. But for the rest of the your life (the other 80% or so you spend as an adult), things become very vague and self-determined.

And so I set out to design a new kind of course specifically for adult dyslexics. Interestingly, Facebook banned my adverts. Presumably something to do with their new discrimination policy? The ads themselves stated clearly that this was a new kind of course aimed at adult dyslexics with a strong interest in exploring their own personal experiences as material for making art.

This opportunity was framed with a specific focus on developing ideas and exploring individual experiences that might feed into the work. No practical or high-end skills were asked for and it was key to my strategy for this new course to make sure that the process was a level playing field as far as possible. This was achieved by putting together a team of individuals who could support, guide and even make work for those on the course, therefore removing barriers between ideas and outcomes.

The goal was to utilise the participants’ ideas and experiences to generate new personas that communicate their invisible personal journey. Some of the outcomes reflected on notions of discovery and change in response to being identified as dyslexic as an adult. Others reflected upon exclusion, a feeling heightened in relationship not only to dyslexia but also to class and race.

Throughout the course, I brought people back to the idea that they were representing something external to themselves through appearing for the camera in character, wearing their cardboard mockups and test outfits. These initial photographs presented maternity images of the self; sometimes embarrassed, sometimes unsure of the character they were presenting. When I reflect upon these early workshop pictures in comparison to the final portraits, it is not only the evolution of the costumes, but also of the persona that is revealed and developed through stance and attitude.

In the end, the audience is presented with a series of images that are unified through the medium of photography; not only representing and collaborating with the participants, but also connecting them through a body of images produced in a uniform fashion. Again, this platform is there to help people focus and reflect on the character; the idea that their crafted objects and performances stare back at you, the audience. More is revealed when viewed alongside their individual statements, manifestoes and snippets of conversation, with each providing a way into the secret worlds which have been made visible in this series of images, performances for the camera.

Ros Lehany gives her perspective as someone who screens, assesses and support students with dyslexia/ dyspraxia

From the start I thought this would be an interesting and rewarding project. For years I have worked with dance students and have been fascinated with the way they directly use their dyslexic/dyspraxic/ADD profiles as a creative stimulus in their work.

I’ve seen how engaging in such creative practice has enabled dance students to deepen their own understanding of their profiles, develop metacognition (understanding how their brains process information), and how this process in turn has had a positive impact on their training and personal development. For others the desire to be able to communicate their personal experience of dyslexia/dyspraxia/ ADD has been paramount in the creative process. Thus, How to be a Dyslexic Artist seemed to me to have the potential to be a life changing project for its participants.

The initial part of my brief, to find dyslexic adults, was a challenge. There is not an established accessible network for the dyslexic population. Social media, the go-to communication system of the masses, is largely language-based and is not dyslexia- friendly; support groups tend to be closed groups; and a population who typically choose not to read are unlikely to engage with wordy emails or posters. In the end participants came through artistic contacts, HE contacts, support group contacts and the all-important personal word-of-mouth links.

Another challenge was giving the artists the opportunity to talk about themselves and to explore how their dyslexia has affected their lives. Being unable to attend all the early sessions was a frustration for me. I have developed a language for enabling dyslexic adults to engage in a reflective exploration of their dyslexia that allows for recognition of the positive aspects as well as the negative.

Dyslexic adults are often unused to articulating their experience of dyslexia beyond the crisis moments and personal humiliation stories, of which there are often plenty. During the sessions it was possible to spend time talking to all the artists whilst they worked and, whilst some found it easier than others to engage in a verbal discussion about their dyslexia and their costume designs, everyone had something to say.

For some artists the workshops became a catalyst for exploring more about their own profiles and they have gone on to have further assessments around dyspraxia and ADD. Discovering these new co-occurring identifications has proved to be a positive experience for everyone, it is not about acquiring labels but developing a much greater self-awareness. Making sense of traits and behaviours, encouraging self-acceptance and enabling new strategies to be explored. The more we understand about how our brains work the more we are able to take control of our own lives. For these artists I believe the experience has been empowering. 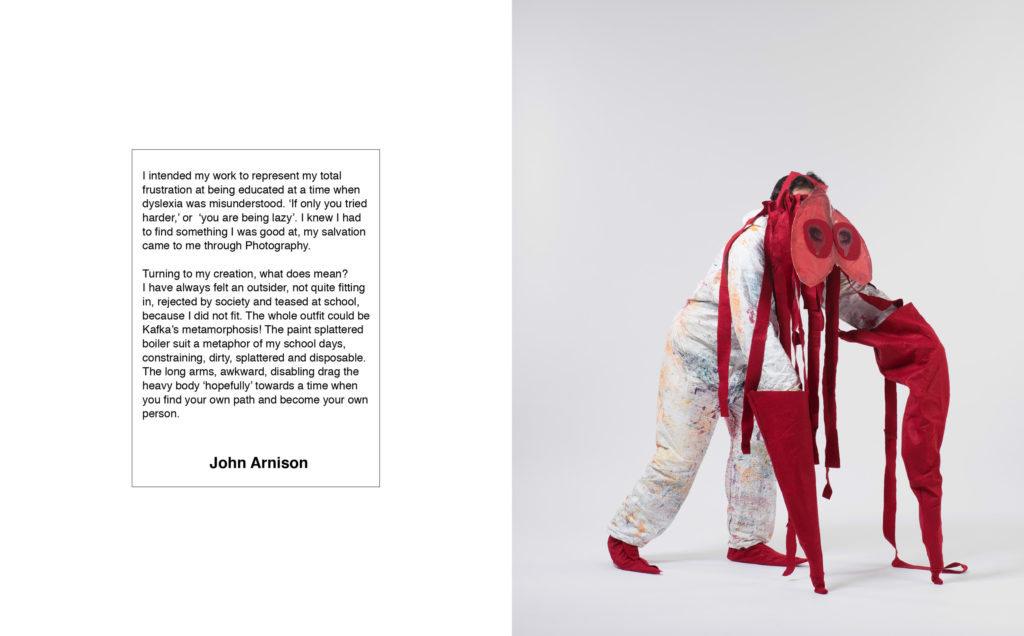 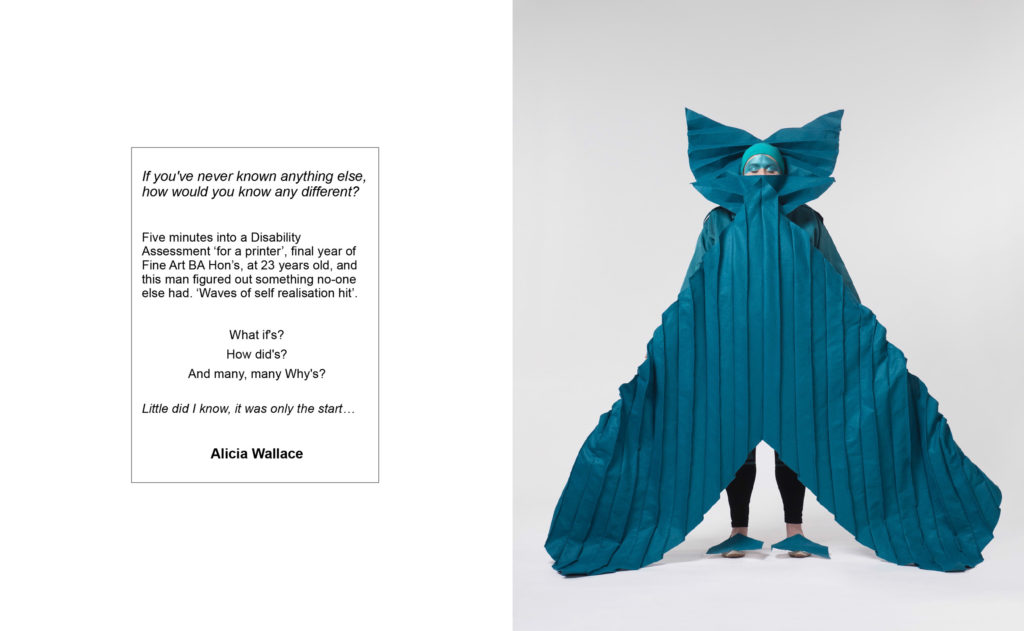 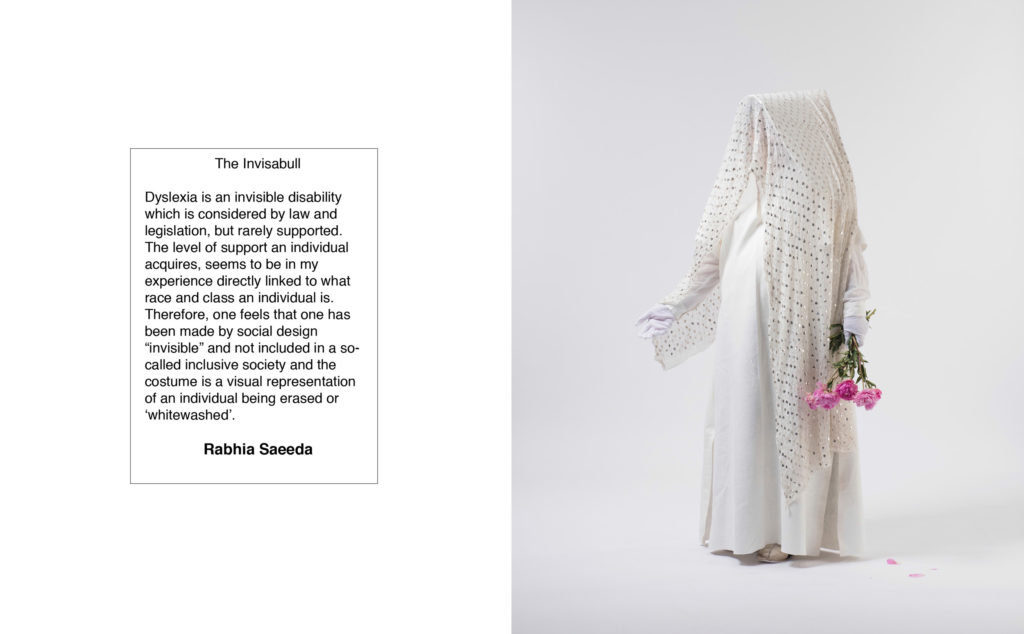 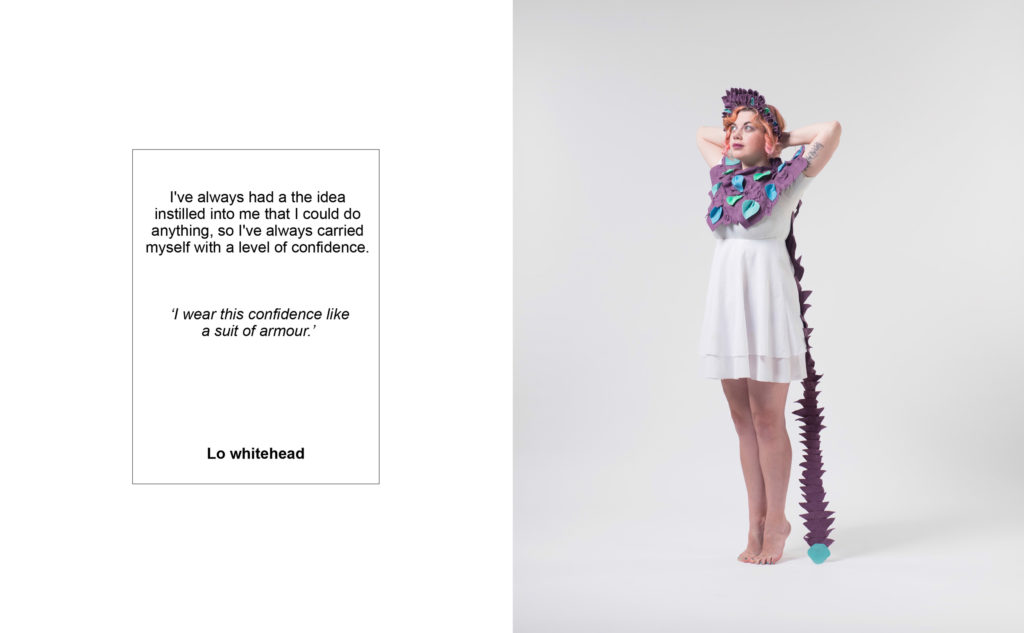 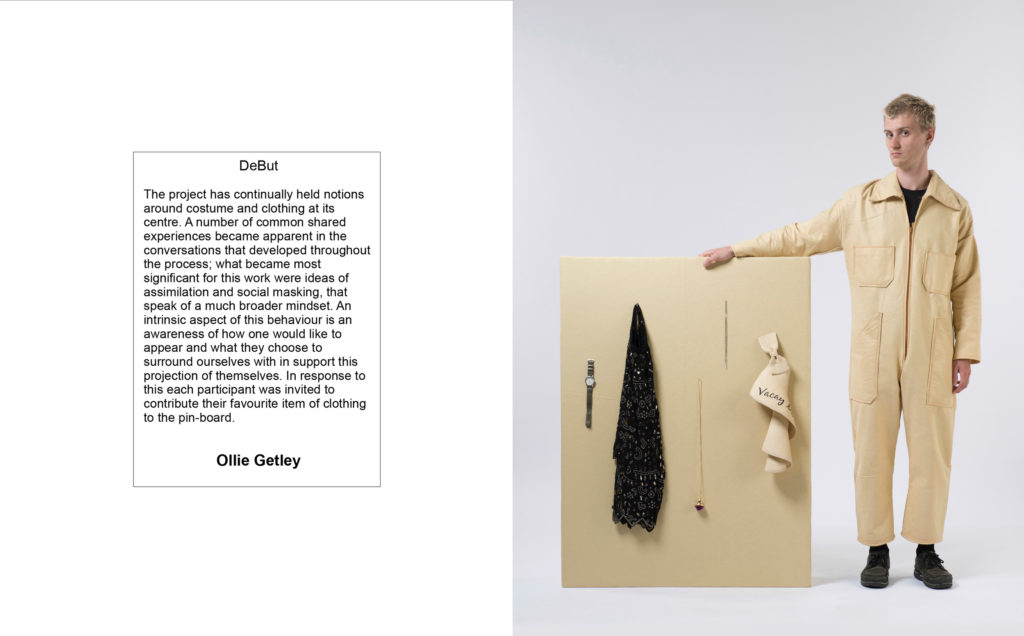 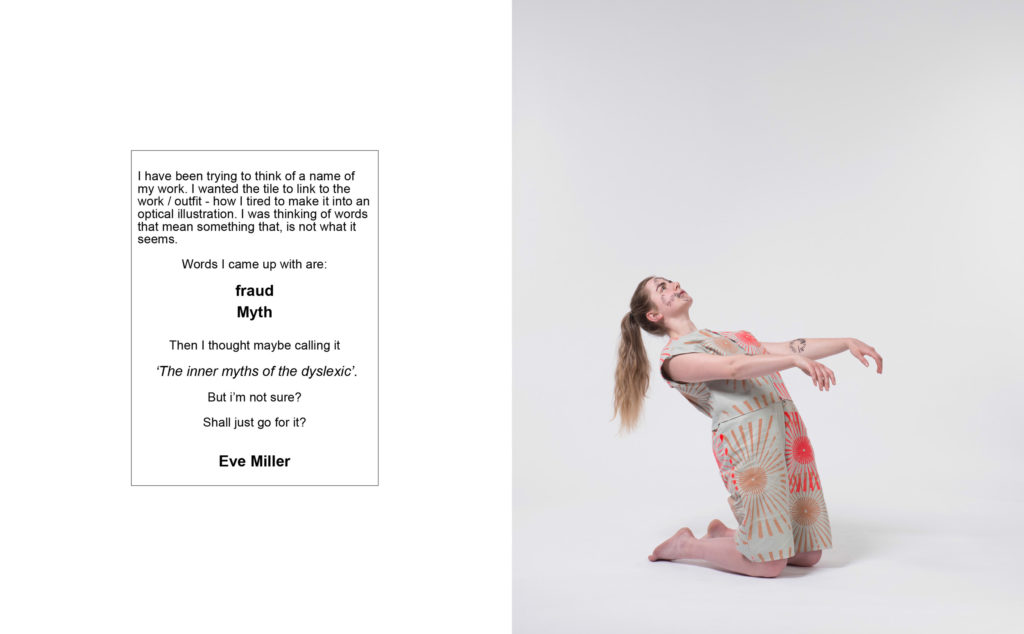 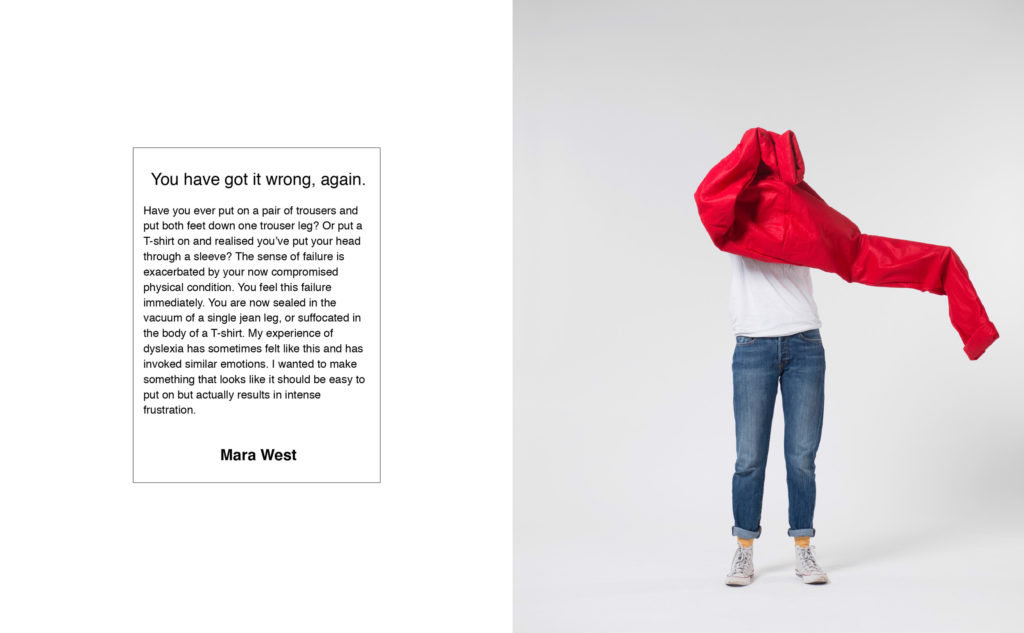