I’m Thinking of Ending Things is an American romance-horror-thriller, described as a ‘hot dose of mental illness horror’, both written and directed by Charlie Kaufman and released on Netflix on 4 September. Review by Katie Driscoll 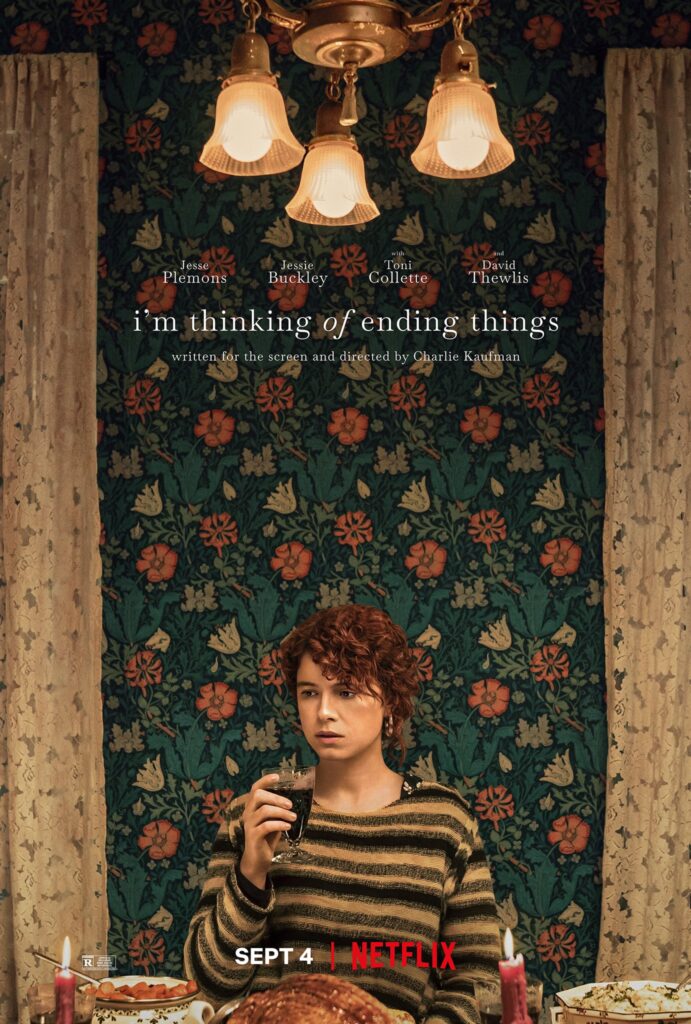 Charlie Kaufman’s latest psychological drama delves into the mind of Iain Banks from his enigmatic book of the same name, where a maelstrom of internalised anxieties are externalised just as the ‘pathetic fallacy’ of a snow storm swirls around its central characters. Just like Eternal Sunshine of the Spotless Mind, Kaufman uses disorder and repetition to evoke the fear of enmeshment of the self with another, and it works to varying, dizzying degrees.

Here the horror is in the real, yet is given a supernatural sharp edge; editing and jump scares are disjointed and unlike the type we come to expect; echoing the disjointed minds of our unnamed narrator (Jessie Buckley) and Jake (Jesse Plemons).

They play a couple whom are only a few months deep into a relationship that all we know of is that our narrator is thinking of ending it, cue: the completely-sensible-idea of venturing in a claustrophobic snowstorm to a remote country cottage to visit Jake’s parents for the first time. (What could go wrong? etc). Toni Collette gives a performance as unpredictable as her role in Ari Aster’s Hereditary, playing Jake’s suffocating mother, and David Thewlis as the father, is as unsettling as his iconic turn in Mike Leigh’s Naked.

With their performances, they aptly ape the chaos of a confused mind – multiple personalities, receptive competing contradictory thoughts, not one stable and secure self – leaving us confused, but sympathetic, and anxious to discover more about the roles they play in Jake’s personality, whom thus far has been an enigma, taking a backseat to his girlfriend.

The snowstorm is its own central character, serving as allegory of the ways in which your mind can alienate you, tighten its grasp on you, the darkness and coldness. The film shows the couple in the car espousing contrasting and contradictory views on Cassavetes or science or philosophy, and in erratic manners – our narrator’s occupation seems to suspiciously switch endlessly – only serving to add suspense to the anxiety we have been occupied with since the start.

Our narrator, Jake’s girlfriend offers an internal monologue that is both terrifying and evocative. She serves to remind us of the chasm between our innermost selves and those we love the most, which our physical form cannot encroach upon, no matter how hard we try: all of us just living in the prison of our minds, a theme exposed in a similar film, 2013’s Upstream Color.

The film pointedly talks about mental illness and its effects are passed down through blood lines (the ‘genetic lottery’); as well as the toll it has on family members (or perhaps the cause-and-effect). It masterfully echoes the feeling this merry-go-round can evoke, with thoughts of chronic anxiety.

In the car, in a snowstorm, on a remote farmhouse, in the mind, there is a dense psychological weight to the story, where the gaps between the self we want to be and the self we project onto others dwells in the spaces of our worst traumas and fears, like the basement serving as the literal embodiment of Freud’s notion of ‘Unheimlich’ here.

Overall, I’m Thinking of Ending Things is dizzying and thoughtful and unique, a wholly original love-horror-treatise on mental illness and anxiety, a perfect vehicle for Kaufman’s directing, yet its oddness is meandering or exhausting, perhaps running in too long at 2 hours and 15 minutes.