In May 2017, UK-based visual artist, Rachel Gadsden spent two weeks in Palestine working with four visual artists from the West Bank, as part of a research and development project funded by Unlimited. With the announcement of further funding to bring the artwork of the Palestinian artists to the UK, Gadsden talked to Colin Hambrook about the project. If this is a Man by Rachel Gadsden

Israeli occupation in war-torn Palestine has brought much bereavement and disability to the region. For disabled people injustice and restriction is a daily recurrence. For Gadsden, a key motivation in working with a group of Palestinian artists has been to support the cultivation of hope in the land where she spent much of her childhood.

Hossam Khadeir, Ali Saeid Ashour, Amna Hussein, and Mahmoud Abu Daghash have developed an ongoing connection with Gadsden, working with the intention of sharing stories with the world through their art. Together, the group has been working to develop a visual language to express global concerns about migration, the lingering flight of refugees, disabled and bereaved people. Mahmoud Darwish’s (1941 – 2008) poem ‘Under Siege’ has become a byline for the project, summing up in few words the situation and aspiration of artists living constantly under threat.

Here on the slopes of hills, facing the dusk and the cannon of time
Close to the gardens of broken shadows,
We do what prisoners do,
And what the jobless do:
We cultivate hope.

Gadsden becomes effusive when talking about the starting point for the project – the khillah – a plant that grows in abundance on the hills outside Ramallah where the group worked together.

“I brought a vase of the wild flower into the studio in Star Mountain and talked with the group about how we could use it as a metaphor within our image-making. The flower soon became an icon for the project, representing both freedom in the way that the seeds proliferate but with a structure to the spray that suggests entrapment.

“So that’s what we started with and they all created artworks around the seed that suggest metaphorical meanings. Daghash pictured his hand embedded in the ground beneath the flower implying that he can’t escape the environment… and Hussein understood the plant as seeds that want to fly… that she wants to fly… that she wants to leave, but is being dragged back by the nature of not being allowed to move from within the confines of Gaza.”

“And then I said to the group ‘forget the seed’, the plant isn’t really what you need to be using but it was a good starting point. In every workshop it became a foundation for me to bring us all together. It came to represent our collective voice that we all exist here, together. Israelis can’t get rid of the khillah, it grows everywhere in Palestinian soil – so it became a symbol of how they can’t get rid of the Palestinian voice.” Ali Saeid Ashour is an accomplished painter of calligraphy, whose work adorns the ceilings and walls of mosques and other public buildings in many locations throughout the West Bank. Gadsden explains how she connected with a painting by the artist that uses a quote from Dawish: ‘on this earth there is that which deserves life’.

“When I saw Ali Saeid Ashour’s work I was so thrilled with it because I love the fact that he has used stitching; stitching the Wall together. I use injections from needles to keep me alive on an hourly basis. I have stitching. I have this needle in me… and the image also conveys the sense of how they’re being needled all the time by the Wall. And it shows a sense of how he’s moving on as an artist to create his own visual language.”

Gadsden has been successful in her aim to convey the motives behind the project, and to determine the nature and character of the work to be produced for the ultimate touring exhibition. As within her own work, imagery becomes a tool for a deeper psychological understanding of the artists’ relationship to the world – an expression of the inner life, for positive and negative in an attempt to break down barriers and reveal a universal truth.

“My key message has been to encourage the group to think more about the images that they’re making – to think about why they’re making the work and what the purpose of the imagery is, beyond the function of art as decoration.”

“Hussain is an artist in her soul. The poetry in her work is extraordinary. She made a very interesting drawing of a series of faces at a checkpoint; they’re all girls trying to go through this corridor – it’s like an animal cage that you have to walk through from one bus through a checkpoint and onto another bus. She painted this group of women with blank, empty faces, mirroring the fact that women, and disabled women especially, have no voice. She is making work about her reality as a disabled woman and the fact her voice is squashed within society at every level.”

“When we come to show the work next year I want to curate the work of the artists in various ways.  Hussain’s work contains something of a quiet voice and will be right for an exhibition of work we are planning for DaDaFest in Liverpool in November 2018, that includes themes of bereavement and mental health.”

Future dates for sharing the work of the Palestinian artists from It Was Paradise includes the Liverpool Arab Arts Festival next July 2018; Unlimited Festival at the Southbank Centre, London in September 2018 and DaDaFest 2018 in Liverpool. Gadsden will be working with the Aida Refugee Camp in Bethlehem in March 2018 in collaboration with the British Council Palestine, after a creative residency with all the artists. Potential sharings of the work are also on the cards for the Exhibition Capital Horsham in June and Milton Keynes Art in the Park in July 2018. 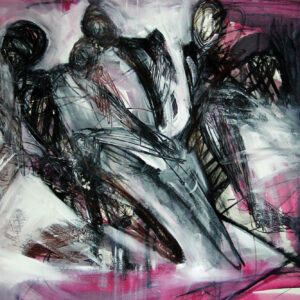 When we embarked on our Deluge creation, we were all conscious that we were going on an exploratory vibrant journey together. I will admit that at times the process of this exploration is echoing the actual themes of the work we are attempting to create. Sometimes we are all caught up in the tsunami wave, ... 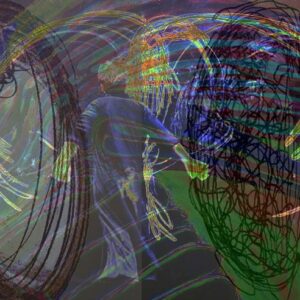 About a year ago I received an email from Australia, from an artist who was applying for an Australian Council of the Arts Grant award, writing to enquire if I would be interested in being part of the grant vision. And with his tremendous award success - Jeremy Hawkes became such an important and significant part ...