Following a sold-out run at the Bush Theatre last year, Sarah Gordy returns to play Kelly in ‘Jellyfish’ written by Ben Weatherill at the National Theatre from 5 -16 July. Natasha Sutton-Williams interviewed actor and playwright about the process of writing and performing this ground-breaking play.

Jellyfish is a progressive and passionate illustration of a disabled protagonist searching for independence, love and freedom from her sheltered home. This coming-of-age tale focuses on twenty-seven year old Kelly who has Down’s syndrome and lives with her overbearing but loving mother Agnes in Skegness. When Kelly starts a romantic relationship with non-disabled arcade worker Neil, Agnes does everything in her power to keep Kelly from living independently and allowing her the space to make her own mistakes. 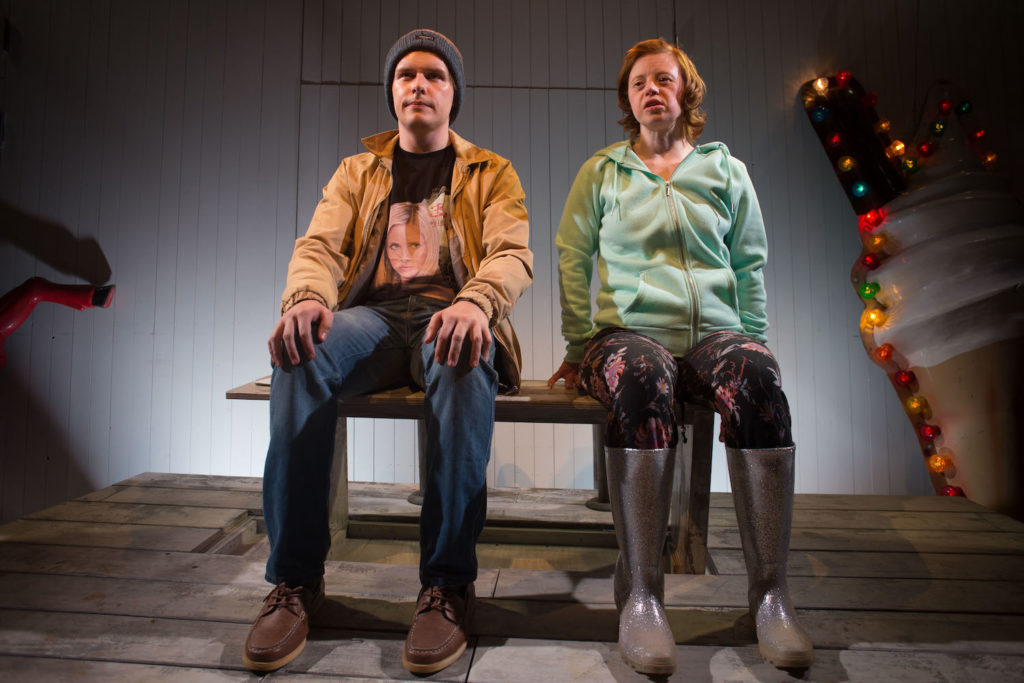 Playwright Ben Weatherill was inspired to write the play due to his love of rom-coms and a desire to write an untold love story:

“I was tired of the tropes of drama, so I started to think about who we haven’t seen fall in love very often. The location came to me second. Skegness seemed like the perfect place to fall in love. It’s somewhere that has lost its sparkle a bit. It seemed fitting.”

Weatherill has always been a fan of actor Sarah Gordy’s work, and she was constantly in his mind when forming the character of Kelly. When Gordy was initially approached, she loved the idea, and admired Weatherill’s tender, nuanced writing:

“He is brilliant and passionate. The role is fantastic. I am rather quiet and gentle but Kelly is tough with a wicked sense of humour. I love having this fierce character in my head.”

Gordy has had meteoric career as an actor in mainstream TV shows like JK Rowling’s Strike, Call The Midwife, and Upstairs Downstairs. Not only that, in 2018 she was awarded an MBE for services to the arts and to disabled people.

Once Gordy was on board for the production of Jellyfish, Weatherill was able to listen to the natural rhythm of Gordy’s inflections and syntax, shaping the text around her voice. Although the role was written for Gordy, she still had to construct a complex inner and outer world for Kelly:

In Jellyfish, Kelly confronts dating, sex, marriage and pregnancy, themes that are rarely explored by disabled characters in mainstream theatre. Early in the conception of the play, Weatherill knew he wanted to focus on a neurodiverse protagonist falling in love:

“One thing that struck me was a statistic from Mencap: only 3% of people with a learning disability live as a couple, compared to 70% of the general adult population. I wanted to understand why that was and discovered it is because of many reasons. Access to sex and relationships education, lack of space to explore and understand sexuality, the delicate balance of risks and rights, living arrangements, I could go on. The more I learned and engaged with research, the richer the themes of the play became.”

Gordy’s mother Jane is a staunch champion of her daughter’s work, having encouraged Gordy’s multidisciplinary career in TV, theatre, dance, modelling and charity work. She also acts as Gordy’s drama coach. During rehearsals Jane worked in tandem with Jellyfish director Tim Hoare, “She watches silently making notes, recording notes from the director. Tim sometimes asks my coach about the lines and how they work. It is hard work but joyous.” When asked how artists with Down’s syndrome can best be supported in the rehearsal room, Gordy gave this succinct piece of advice, “For actors, please get the scripts to them early. It takes longer for us.”

Through her astonishing career, Gordy has performed alongside some of the best contemporary actors in Britain. What wisdom has Gordy gleaned that she can pass on to emerging disabled actors? “Do it because you love it. Work hard. Have fun. Eat carefully for maximum energy.” Weatherill says that he is terrible at giving advice, but he did have this useful nugget for aspiring disabled playwrights, “Someone once told me I should grow everything (the characters, the scenes, the imagery) off the same tree. The same central question.”

Weatherill’s first big break into the industry came in 2015 when his play Chicken Dust won the Curve Theatre Leicester Playwriting Competition. It provided him with the support, time and space to develop his writing. “It was the first time I felt someone had said, ‘Yes, you can do this.’ ” Since then, Weatherill’s writing has gone from strength to strength.

Jellyfish was originally developed with the National Theatre Studio. The success of the sell-out run of Jellyfish at the Bush Theatre further piqued the NT’s interest. They have programmed the production this July, and are able to promote this disability-led work to a wider, more mainstream audience. This is certainly a victory, but systemic change needs to occur so that the industry enacts real change and brings disabled creatives further into the theatre mainstream. Weatherill emphasises that:

“Now is the time for institutions to stop talking about it, and starting doing it. Start making bold and active choices to support emerging and established disabled creatives across the industry. Everyone deserves access to excellent creative spaces. Seeing yourself represented is important. Talented performers like Sarah Gordy and Nicky Priest (Dominic in Jellyfish) are hungry for meaty roles. There is a dangerous tendency to syphon off work by disabled creatives (or disabled narratives) into curated seasons. Obviously, celebrating work is great. But it is also about having work on the big stages, the traditional spaces that have been denied. We shouldn’t let the industry off the hook and let them say, ‘Oh, we’ve done it now. We don’t need to push on further now’.”

Gordy agrees with Weatherill’s sentiment, adding, “The industry has to remember that the majority of the public are either disabled or have a friend or family member who is. The public are interested in seeing themselves represented.”

Whether you are disabled or non-disabled, you will be hard-pressed not to be moved by Jellyfish. It’s a poignant dissection of what it means to be in love, and what it means to have agency in one’s own life.

Jellyfish will be performed at the National Theatre from 5 – 16 July. For more information and tickets, please see the website.