Dave Lupton interviews Disabled Artist and Producer Jo Verrent in the continued series of first-person accounts about the life-changing impact of connecting with the disabled community and the social model of disability. 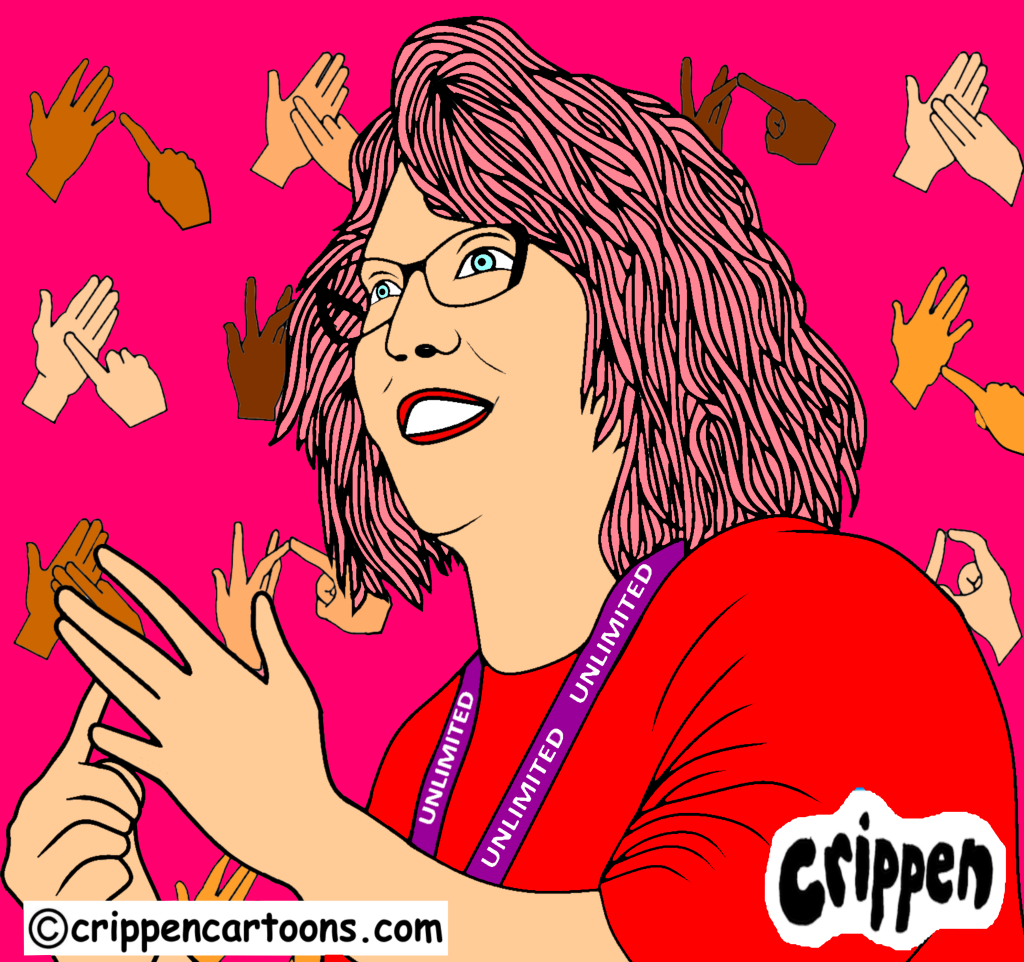 Jo began to lose her hearing when she was about eleven years old, but it wasn’t until she was doing a post-graduate course after University that she was introduced to the social model understanding of disability. She explains how this occurred:

“I’d got a place to study ‘Theatre of the Deaf’ and rather than me fighting for and making all the adjustments to study or simply missing out on specific content (as had been the case throughout my initial degree), this went very differently.”

After explaining to her about the social model and how it related to her course, Jo was encouraged by the university Deaf Access team to identify the barriers that she faced during her studies. Once identified, she was then told that it was the university who was responsible for removing them.

“The university provided notetakers, and key staff were taught basic British Sign Language (BSL) with some of the lecturers delivering their courses in both English and BSL. Even the bar staff in the student social club learned BSL so socializing became easier too. This was not only transformational to my access but also to my confidence, and, more importantly, to my results!”

However, Jo was later to discover that the university had only accepted this approach to her and the specific course she had taken. They hadn’t provided the same adjustments for other disabled people taking courses across the University. This fuelled Jo’s determination to work with other disabled people in the future and fight with them for a level playing field for all.

As part of her early childhood Jo was constantly praised and told that she had adapted well and that  ‘no one would ever know’ that she was Deaf. She explained:

“This approach suggested to me that it was right to try to fit in and to cause as little fuss as possible; that I should try to get by, to hide and cover up the fact that I was Deaf.”

Not only did this make Jo feel somehow ‘lesser’ than other people and carry a sense of shame, but this also, perversely, gave her a misjudged sense of pride in how well she was coping. Later on she realised just how damaging both of these were – both to her and to the wider Deaf community.

However, when Jo was first introduced to the social model by the Deaf Access team she described feeling a huge sense of relief. She discovered that it wasn’t ‘all her fault’, and although she couldn’t alter things that were truly out of her control, that the real responsibility lay with the creators  of the many barriers that excluded her from participating equally within society. She went on to say:

“I felt angry that no one had told me (about this) earlier, and that I’d wasted so much time trying to fit in and adjust myself, rather than society adjusting to meet my needs.”

Jo soon discovered that applying this to other areas was less easy, as fewer service providers understood the social model approach, or were willing to make the necessary ‘reasonable adjustments’. She also experienced problems with her family as she explained:

“My family felt I was making a fuss, choosing to be visible and drawing attention to something that I could hide. I understand now, many years later, that this came from their sense of shame, of my mum having had an ‘imperfect child’. Again, this was reinforced by society’s constant emphasis on perfection, especially with babies.”

“I did not fit so easily into the Deaf world having been brought up in an entirely hearing world, having developed strong lip reading skills, and having some residual hearing boosted by hearing aids – things some Deaf individuals found difficult to accept. For some in the Deaf community, I wasn’t deaf enough to fit in. At the time this also made me question my ‘right’ to define as a disabled person.”

But for Jo, using the social model approach gave her feelings of confidence and the ability to take pride in herself as a disabled person. She emphasised this point further:

“It has also given me a different way of thinking and adopting a more positive approach to language and other situations. It was also immensely useful when I gained an additional impairment a number of years ago, especially in relation to finding ways to continue working and obtaining support to do so, such as the Access to Work scheme.”

Jo also found that getting involved with the Disabled People’s Movement and especially the Disability Arts Movement was life changing and has provided the context for much of her work, her social life and friends, and has set the tone for the rest of her life.

She also explained that the social model had impacted upon other areas of her life, so for example when friends and colleagues became impaired, she was able to share her own experiences and knowledge about the social model, knowing that the medical professionals involved in their treatment and care weren’t going to explain it to them!

Jo is also a Producer with Unlimited, an arts commissioning programme that enables new work by disabled artists to reach UK and international audiences. Through this and through her other work as a disabled artist, she now works with others to create resources, training and events that explain the relevance of the social model. This is especially to groups or individual artists who have not heard of it before. The structure of Unlimited is also built around social model thinking as much as possible, with board members and staff undergoing Disability Equality training based upon the social model.

As part of her methodology to her work and to the arts, Jo also encourages an open and curiosity based approach rather than just telling people what they should think.

“For me this is really important, especially as the United Kingdom has a history of imperialism and is seen by many countries as being high handed and arrogant in their approaches to other cultures and beliefs. I have come across many cultural differences in the understanding of disability and the uses of terminology around the world, and it can be deemed highly offensive and culturally insensitive to push a perspective from outside rather than consider their own histories, approaches and evolution.

“Instead, I explain what I think and why, the history of the thinking behind the evolution of the social model, and how disabled activism has changed legislation within the UK. I attempt to draw parallels and question where the current models in place are, in my view, oppressive or unhelpful. I also try to encourage people to empower themselves to find their own way through, which may (or may not) lead to a similar understanding. But most importantly, I also listen and try to understand those who have a different point of view or have opinions about disability that are different from my own.”

Jo also shared her thoughts on how she believed that the social model understanding has affected the lives of disabled people generally.

“I think that it can be transformational as it displaces an individual’s sense of blame or guilt, and places responsibility where it belongs and where action can be taken. I also think it can inspire a political approach to one’s own understanding of disability and society. However, this can also bring with it huge frustration once we become aware of how little the rest of society take this approach seriously, and also just how many barriers there are. It can be really exhausting!”

With regard to whether or not she feels that the social model is outdated and needs changing, Jo thinks that it always needs questioning and reinterpreting, especially for those new generations who experience the world differently as she explained further:

“We can look at other social justice movements – Black Lives Matter and the Trans Movement for example – and see that there are rapid evolutions at the moment. These are fed by open discussions and debates which are often complex and painful as people’s understandings shift. For example, my children are now my teachers and have taught me a new vocabulary around gender, sexuality and queerness.

“Also, with experiences around impairment I am constantly coming across new language and nuances. I remember when Deaf people wished to be named as separate from ‘disabled people’ due to the perception of Deaf culture as a linguistic minority rather than something based on impairment. This took a while, but gradually became accepted and many now use the term Deaf and disabled (or D/deaf and disabled) instead. However, like many others who work from a social  model perspective, I’m used to defining as a disabled person first and then as a Deaf person.”