joey is a New Wolseley Theatre Testing Ground commission, produced in association with Greyscale. Scott Turnbull and Faye Alvi both play the character of ‘joey’ (named with reference to Joey Deacon, the disabled man who appeared on children’s tv program Blue Peter in 1981), Faye using BSL and Scott using spoken English, allowing for complete integration of both languages. 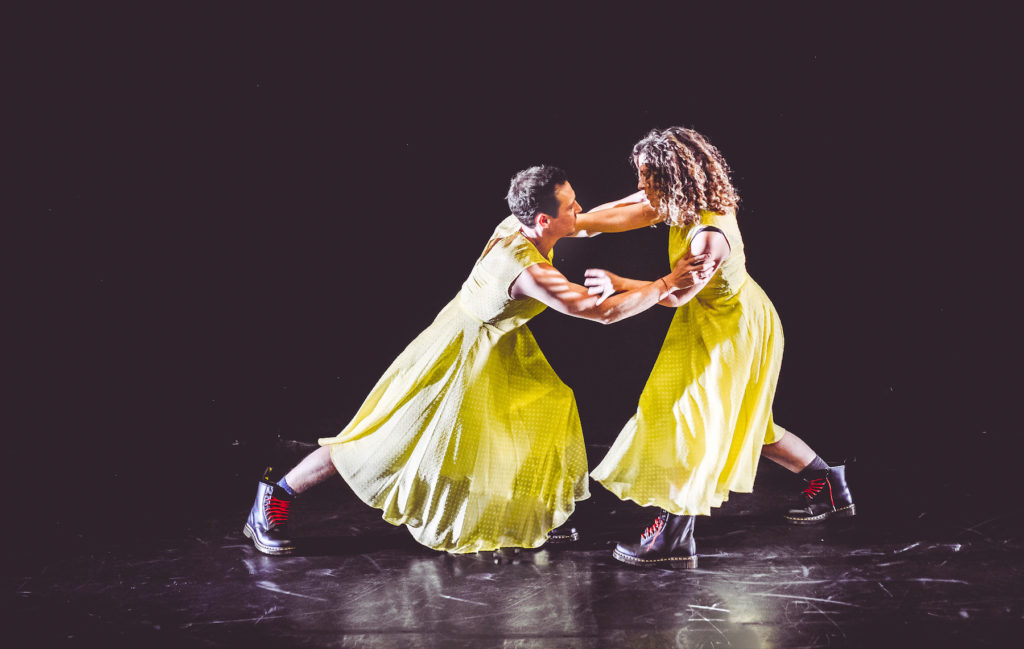 joey has the power to leave the audience stirred up, connected, disturbed and joyous. This piece of theatre captures the spectators with superb performances rooted in words that dance, trick, soar, envelope… and break.

The setting could not be more simple – black box bare, with a throbbing soundtrack and the presence of the two ‘joeys’ in matching yellow dresses and red sneakers. Turnbull and Alvi as themselves, not in character, begin by explaining that the performance is relaxed, allowing an exceptional level of intimacy with the audience before unleashing what to all intents and purposes is a breathless onslaught of words and emotions. 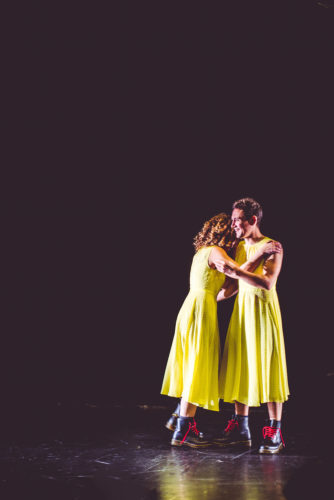 For the actors to hold the audience’s attention throughout what is essentially a monologue shows extreme talent and skill, combined with exquisite directing. The actors nurture the writing in their safe hands; together they guard the words, connect with them and pour them out in speech and in sign.

There is not a single moment that lingers too long, or a beat that is lost. The symbiotic connection between the two actors is solid and electric; they create the character of joey as one; the moments where they look into each other and translate back and forth, passing the lead between them, are stunning. A scene in which joey defies the police by sitting on a pedestrian crossing and watching television is choreographed and played to hilarious perfection.

The language is confrontational, utilising the words hurled at disabled people in the playground and in the street, bringing a chill to the bone; yet here the insults are reclaimed and repurposed. Words and their melody create the character of joey, make them true and real. The script is mesmerising, dense and bold, with alliteration and internal rhyme and a unique voice. It dances off the tongue and then breaks to points of short sharp intensity.

joey has a power, which works equally well in print, as published by Aurora Metro Books. It is impossible to disentangle performance from the page, but the way it is laid out allows the eye to breathe with the words, to follow burn’s intentions, and therefore holds up as literature in its own right, with its own pulse and rhythm.

The end sequence, line upon line beginning with “this joey”, which crescendos upon the stage, is just as intense and heartrending upon the page. Included in the book is the script for ‘explosives with love’, which was not performed and therefore allows for scrutiny to whether it holds up as material to be read in its own right without prior witnessed knowledge. It invites and requires multiple readings, with each one uncovering a different and unusual way of painting the world with letters.

joey is a visceral sucker punch of a love story, diving to heart-breaking depths and then soaring to divine levels of triumphant joy. It deserves a much a longer national run – sean burn’s voice is one that must be heard.

joey is available from Aurora Metro Books priced £8.99  For more information about the play go to www.joeytheplay.com