Chester’s Kaleidoscope Festival showcased a screening of short films from Australia, Belgium, Denmark and the UK on 2 October, with an aim of normalising onscreen D/deafness. Steph Niciu went to find out more.

*Spoiler Alert* This review contains plot information about the following films: The Last Time I Saw You by Damian McLindon, You’re Lost, Little Girl by Cédric Bourgeois,  Boat by Louise Stern, A Woman Like Me by Lilia Morales Bondy and To Know Him by Ted Evans. 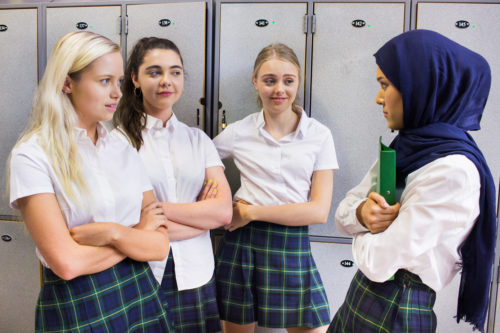 The Last Time I Saw You, by Damian McLindon

Kaleidoscope Festival collaborated with Encounters Festival, which is the UK’s leading short film, animation and virtual reality festival. For the third year running Encounters Festival has curated shorts on D/deafness. There is an international selection with five films from Australia, Belgium and Denmark as well as the UK. As I took my seat at the Storyhouse cinema, I was intrigued to see what this programme had in store.

A key theme running through the screenings was vulnerability and how it can be felt as both a strength and as a weakness. In the case of The Last Time I Saw You, by Damian McLindon, a 16-year-old Muslim refugee called Fatima becomes D/deaf after an explosion in her hometown of Kabul and then moves to Australia to start a new life. She confronts three girls in her school toilets who have bullied her. She is vulnerable because her D/deafness and cultural differences mean that she is ignored, misunderstood and frustrated. By the end of the film, Fatima uses her vulnerability as a strength in a final act of triumph.

In Cédric Bourgeois’ film You’re Lost, Little Girl, the protagonist, Anna, is vulnerable after her grandmother is admitted to hospital and she is alone on her campsite. She becomes easy prey and is raped. Being D/deaf means that she is not able to communicate in the way society expects. She is perceived as a woman who cannot defend herself physically. The aftermath sees her dealing with the consequences. Essentially, these films show you that being D/deaf presents challenges and can make you vulnerable in ways you do not always have control over.

For the filmmakers of these shorts and the characters portraying D/deafness, communication was significant. How do they portray and effectively get across what it is like to be D/deaf to hearing and non-hearing audience members? The use of music in many of the films gives a sense of the important messages that are not said but needed to be heard.  In Louise Stern’s Boat the exchanging of notes and the use of dance are important methods of communication. In Isabel Lilia Morales Bondy’s A Woman Like Me explores the complexities of language using powerful visuals – a dark screen is mottled with patches of light – using subtitles to voice the characters. These alternative ways of communicating convey different aspects of D/deaf culture and how you need to think outside the box to say what you need to.

Relationships were key in each film. The way that characters related to themselves and their D/deafness was striking as well as how other people related to them. The sense of being different and an ‘other’ is apparent in all the films. In Ted’s Evan’s To Know Him, it is the dad who has an issue with accepting his son’s deafness and he has struggled with this throughout his life. His son dies tragically in an accident and at the wake his dad comes to deeply regret having severed his relationship with his son because of his son’s deafness. Even though this is about being D/deaf, the theme of acceptance is universal.

Kaleidoscope Festival screened a great selection of films. Each short was of high quality and certainly not low budget. They all made me think about D/deafness in ways I hadn’t before, and that is a sign of a successful showcase. However, it was a real shame there wasn’t more of an audience for these screenings. I would have liked to have seen more engagement. For example, organising a Q & A after the screening giving us a greater understanding and knowledge about the creative processes involved in making the short films. After all, these films deserve to be seen.

Where can we see the D/deaf short films please?