Acclaimed American performance artist Karen Finley weaves together a collection of texts, letters and poetry from 1983-1994 which reflect her deeply personal testimony of the AIDS crisis. Written in Sand combines poetry, spoken word and music, with the help of talented multi-instrumentalist Paul Nebenzahl. Joe Turnbull was transported back in time.

2015 marks the 25th anniversary of Karen Finley’s seminal book, Shock Treatment, which candidly portrays the unfolding terror of AIDS in the 1980s, acting as a searing indictment of mainstream liberal culture that so badly mistreated the LGBT communities at the time. To mark the occasion, an expanded edition has been produced and Finley is taking her show on the road.

Written in Sand acts like a musical accompaniment to the book. Finley’s series of lamenting elegies set to music are interspersed with renditions of songs made by musicians who have since lost their lives to AIDS including Freddy Mercury and the B-52’s Ricky Wilson. The title references the romantic gesture of declaring ones love in the sand, whilst also asserting the ephemeral nature of something inevitably doomed to be swept away by the tide.

Barbican’s The Pit provided a suitably foreboding venue. The lights were dimmed on a packed room. Little flames flickered on the stage area as Finley and Nebenzahl entered, fittingly giving the feeling of a candlelit vigil. The latter dazzled with his virtuosic flute-playing. Finley, after hamming up the crowd a little, dropped her first bombshell – or should that be poem.

The beat poets’ influence on her disjointed, rambling style, full of repetition and grating cadences, was clear. It felt at times not so much a performance, as an unleashing of pure emotion – grief the chief among them, but there was also plenty of room for anger and guilt. It’s small wonder. Finley lost as many as 60 friends to AIDS. She is still evidently enraged at the society that so shockingly shunned them.

Finley took the odd break from the vitriol to woo the crowd. © Hunter Canning.

What followed was a litany of fury and mourning through the medium of spoken word, Finley describing the programme as a “list of funerals”. Her ire for the contemporary attitudes towards AIDS was fierce: family members told her “it must get easier when you’ve lost so many”. This said whilst complaining about their fad-diets or boring marriages; “sometimes,” she screams, “I pretend to have their problems”.

Finley’s intimate yet public display of pure grief laments the tendency to put on a brave face: “I’m so fucking sick of your positive attitude,” she directs to a dying friend who keeps looking on the bright side. To really grieve is to make yourself vulnerable and that is something Finley fearlessly embraces on stage.

This cauldron of visceral energy was occasionally punctuated – or should that be punctured – with her disarmingly off-hand conversational style with the audience, who she regularly had roaring with laughter, when they weren’t on the verge of tears. Her casual stage chemistry with Nebenzahl and apparent lack of knowing what piece was coming next was endearing. Here was the full gamut of human emotion.

Much of the performance felt like being transported back to the 1980s – both stylistically and politically – and I couldn’t help but be moved on a purely human level. Loss is something we all experience. When she described not being able to remove dead friends from her rolodex it really struck a personal chord. As did her description of the tiny domestic details of her past friendships – like recalling certain smells or meals shared. These senses are often so much more evocative for conjuring up memories.

Despite the years that have passed, it’s pretty clear that time hasn’t healed the scars of Finley or the wider community she has come to represent. This performance laid bare those gaping wounds, making for a difficult, challenging but hugely important show. Lest we forget. Lest we get complacent. Lest we fool ourselves into thinking that the battles over attitudes and for acceptance have already been won.

SPILL 2015 continues at various venues in London until Sunday 8 November. Please click on this link for details 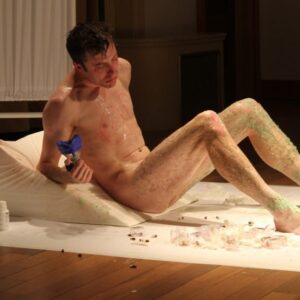 Martin O’Brien’s Viewfinder commission has delved into the SPILL archives and emerged as a set of conversations and accompanying playlist that are sure to spark further debate and enquiry. Disability Arts Online’s Viewfinder project is all about enabling people to find views on the world through artists videos in order to instigate meaningful conversations. The Illness ... 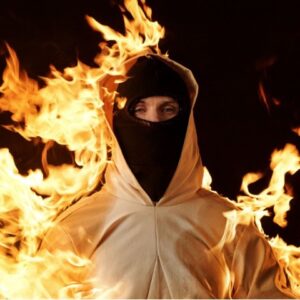 Spill Festival is an experimental artist-led festival produced by UK-based arts organisation Pacitti Company. This year's festival took place across multiple venues in London between 28 October and 8 November. Artist and former Spill performer Dr Martin O'Brien gives his personal response to the festival as a whole. The final performance of Spill Festival has just ... 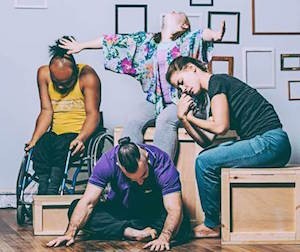 As part of an Arts Council's Catalyst funded programme arts professionals were invited to The Point, Eastleigh on July 10th 2015, to discuss through provocation, debate and performance 'Shaping a Diverse Future'. Here is Trish Wheatley's provocation on the future of the arts, which was delivered at the event. I’m reminded of a speech from Lennard ...