Disabled photographer, Kev Howard’s latest solo exhibition d-FORMED explores the physical and emotional challenges he has experienced as a result Arthrogryposis Multiplex Congenita. It is on at Teesside University’s Constantine Gallery 18 November – 8 December 2017. Here, Howard shares some insight into his work. Saltburn-based Kev Howard’s social documentary and observational photography has reached global audiences for more than a decade. He’s photographed hundreds of bands, poets, artists and demonstrations in that time – with a photo of Benjamin Zephaniah appearing in The Independent, and his photo of Saltburn-based writer Carmen Marcus gracing the cover of her critically acclaimed debut novel How Saints Die earlier this summer.

Howard is also an accomplished musician, and has travelled the world as a didgeridoo player, appearing in an Australian Rock Opera plus festivals in Holland, Germany, Belgium and America.

The exhibition sees Howard turn the camera on himself, exploring his lived experience of Arthrogryposis Multiplex Congenita (AMC) – a term used to describe over 300 conditions that cause multiple curved joints in areas of the body at birth. Howard has had 55 major operations as a result of AMC. With each new operation shifting his centre of balance, it’s meant that Howard has had to learn to walk 22 times. What inspired you to put this exhibition together?

“A whole range of things really, everything from growing up in a generation where, in my opinion, disability rights are often just given lip service. So I decided to chart my own history, found that my body has its own story to tell, and the exhibition is based around that.

The reaction to the exhibition earlier this year was incredibly positive and, amidst all the uplifting feedback, it’s inspired Louise Logan to work with me on this Teesside University display. Louise is a PhD student whose work explores the varying different perceptions of disability, and she is inviting members of the public to join a focus group to help aid her research.

In doing so, she’s helped transform the exhibition into a project that may, somewhere along the line, help make a difference to the way that millions of disabled people are treated in future generations. She has already established focus groups with some students, but is keen to attract people from the wider community to get as broad a mix of opinions and perceptions as possible.”

Talk us through some of the exhibition, and the inspiration behind the photos.

“This was the last thing I always saw before being anaesthetised for surgery. It instilled great fear and panic, which intensified up to the age of 8. The anaesthetic gas smelled ferrous and toxic. I knew the next stage was like the sound of a billion bees buzzing inside my head, and then a kaleidoscope of colours which came from nowhere. Then I remember a deep blackness, which fell into a pinpoint of circular light. At 8 years old my mindset changed, and the fear was replaced by a sense of ‘adventure,’ a coping mechanism that stayed with me right the way through to the very last surgery.” 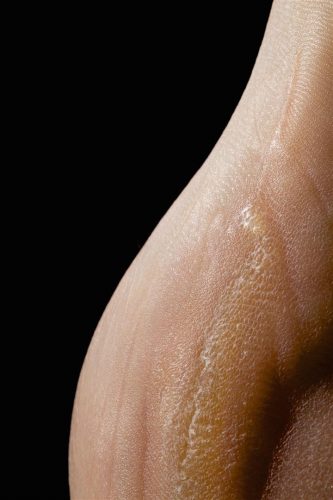 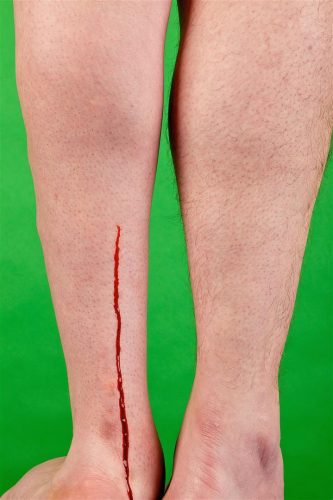 “This image highlights the scarification of multiple surgeries in the same area. This part of the foot has areas of hypersensitivity and extreme nerve damage.I really wanted to show the sensual curvature of the foot, but also the extremes within one scar. Where the scar finishes it is light, hardly noticeable. But, just a couple of inches away, it is heavy, gnarly and extreme, with an almost reptilian-like texture.”

“This a very simple image that represents one of the most severe surgeries that I’ve had. The area was operated on 22 times over a nine-year period, and turned the bottom part of my left leg from facing backwards to facing forwards.A complex set of procedures involved the breaking and resetting of individual bones within the foot and leg, and completely removing the fibula, allowing the limb to be gradually rotated over a period of years. This image obviously downplays the severity of the procedure. And by this point, aged 8, I had adopted a coping strategy of ‘adventure’ instead of fear when it came to surgery.” “Here, I’ve hidden the flesh with various coloured latex and photographed it against a plain coloured backdrop, basically showing the limbs in coloured sculptural forms. I’m also expressing that, although we all have this basic form, some of us are very different in terms of our body shape – and asks people to think about why we often see beauty as skin deep or not.

“Basically, we live in an age when what is perceived as ‘normal’ is, by and large, unobtainable by the majority of people. We are constantly being fed images of a particular body shape and size, which is having a major effect in society in terms of self-esteem, well-being and acceptance. Thankfully, more and more people in the public eye are fighting back against this body-shaming and having to be ‘perfect’ all the time. We need to accept who and what we are in terms of how we look, and celebrate our own individual self.” “It was great to see Prince Harry and Barack Obama at the Invictus Games and, like the Paralympics, to see disabled people and their athletic achievements shining out on the world stage. But it would be even better to have the same level of equality and social inclusion that everybody else can take for granted on a day-to-day basis.

This image is my own response to both this and the previous Government’s lambasting of people with impairments, ill health and mental health issues – something that cuts across all the main parties. Successive policies and cuts in funding, particularly the loss of the Independent Living Fund and mental health budgets, have created an ongoing crisis for people in need of support.

“This is not only causing needless stress and anxiety to some of the most vulnerable people in our society, but people are actually dying as a result! Due to changes in the welfare system and the cruel use of sanctions, over 2,800 vulnerable people died within six weeks of a Work Capability Assessment from January 2011 to February 2014. And in the same period, around 10,600 people died within six months of being found ‘fit for work.’ Those figures had to be dragged out of the Government and, if anything, the situation is getting much worse.

“In fact, earlier this summer the UN described the Government’s welfare cuts as creating a ‘human catastrophe’ for disabled people in the UK. The thing is, everyone can see this if they look closely enough so, if Prince Harry and Barack Obama would fancy banging a few politician’s heads together and actually making a real difference, I’d be very happy to sit down with them and have a chat about this. Anyone got their number? No?”